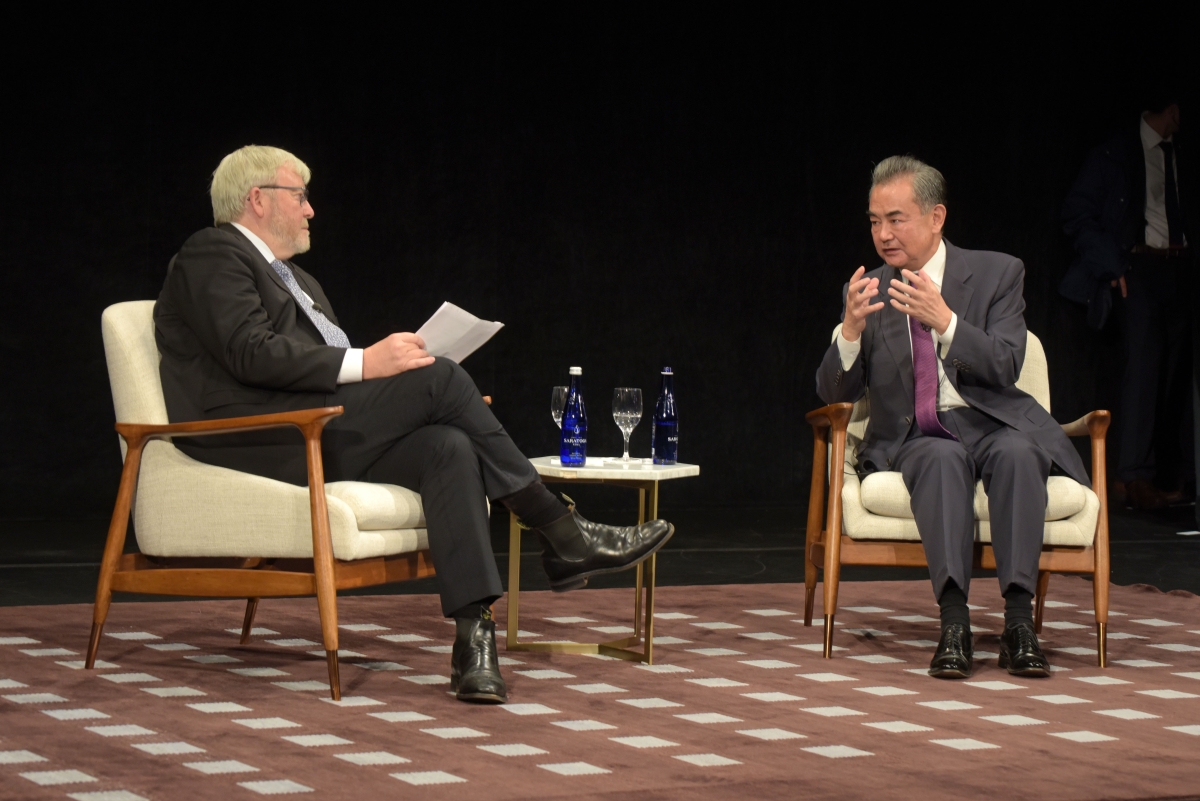 His Excellency Wang Yi, Foreign Minister of the People’s Republic of China.

His Excellency Xie Feng, Vice-Minister of Foreign Affairs of the People’s Republic of China.

Distinguished members of the Chinese delegation, including Ambassador Qin Gang.

The world has seen tumultuous changes over the intervening 65 years, but our mission has remained constant.

Our predecessors, therefore, have been in the business of navigating a vast array of strategic changes — both regionally and globally — and which from time to time appeared terminal.

China has changed greatly over all these decades.

As has the United States. Just as the region both countries share across the Asia-Pacific has changed as well.

Over all those years, our combined strategic mission has nonetheless remained constant: namely how to build a strategically stable, economically prosperous region and world — and now one needing to address the common challenge of us all, climate change.

Lying at the geopolitical fulcrum of all these challenges is the relationship between China and the United States — and lying at the very center of this fulcrum is the question of Taiwan.

Since 2014, Xi Jinping has described the desirable state of U.S.-China relations as one of “no conflict, no confrontation, mutual respect of each other’s political systems, and win-win cooperation.”

Since 2017, the United States has characterized the relationship as one of strategic competition.

These differences are not simply those of language. They also reflect different perspectives on underlying realities.

China, for its part, has raised many questions about the state of U.S. domestic politics, the rising tide of American protectionism, and what Beijing concludes to be a change in America’s longstanding approach to the One China Policy together with recent perceived changes to America’s historical approach to strategic ambiguity.

I am sure the Foreign Minister will have much to say about these questions in his remarks today.

Here in the United States, Americans also ask a range of questions for which they are seeking answers.

Questions concerning the speed and intensity of China’s military modernization and expansion program;

Questions concerning China’s strategic posture towards Russia arising from Vladimir Putin’s decision to invade the sovereign state of Ukraine in violation of Article 2 of the UN Charter;

Questions concerning China’s future economic growth and its Zero COVID Policy, as well as what analysts have concluded as being a shift away from the market and back towards the party and the state in China’s overall economic policy settings;

And questions arising now from the UN Human Rights Council’s recent report on the Uyghur people in Xinjiang.

And once again, I am confident Foreign Minister Wang will have something to say about these questions as well.

We at the Asia Society in May this year hosted the United States Secretary of State Tony Blinken for his major address on U.S.-China strategy around the administration’s three thematics of: investing in America’s domestic strengths; strengthening alliances in Asia and Europe; and competing with China in all policy domains.

I understand that in the Foreign Minister’s remarks today, his intention is to outline a wide-ranging exposition on China’s view of its future position in the region and the world, and bilaterally in its relationship with the United States.

Our job at the Asia Society is to shed light rather than heat wherever we can.

And in the spirit of avoiding crisis, conflict, and war between these two great nations and civilizations, I would respectfully request both governments might consider the possibility of a new framework of "Managed Strategic Competition" between them — constructing strategic guardrails around well-known redlines; agreeing on a framework for constructive competition in other domains; while still creating the political and diplomatic space necessary for both countries to cooperate on common global goods including on climate change, global financial stability, nuclear nonproliferation — and global public health.

Such an approach may require some adjustment to existing strategic narratives in both capitals.

But there is a growing need expressed in capitals right around the world — in Asia, Europe, Latin America, Africa and elsewhere — that it is in our common interest to see the strategic stabilization of the U.S.-China relationship for fear that crisis, conflict, and war (by accident or by design) produces catastrophic consequences for the rest of the world.

We feel this acutely as an Asia Society family. Besides our five centers across the United States, we also have centers in Seoul, Tokyo, Hong Kong, Manila, Sydney, Melbourne, Delhi, Mumbai, Zurich, and as of next month, Paris.

The future of the U.S.-China relationship is fundamental and consequential for us all — not just for Washington and Beijing.

That’s why it may be in all of our interests for the U.S. and China to consider a new, joint strategic framework for their relationship — one built on the Three Communiqués and the One China Policy — and one which explicitly embraces the principles of peaceful cooperation; constructive competition; while recognizing the need for a framework which establishes strategic guardrails within which the overall relationship can operate in strategic stability.

Foreign Minister Wang, you are a welcome guest here at the Asia Society. We last hosted you in December 2020 through a virtual forum.

And we look forward to doing so again in the future.