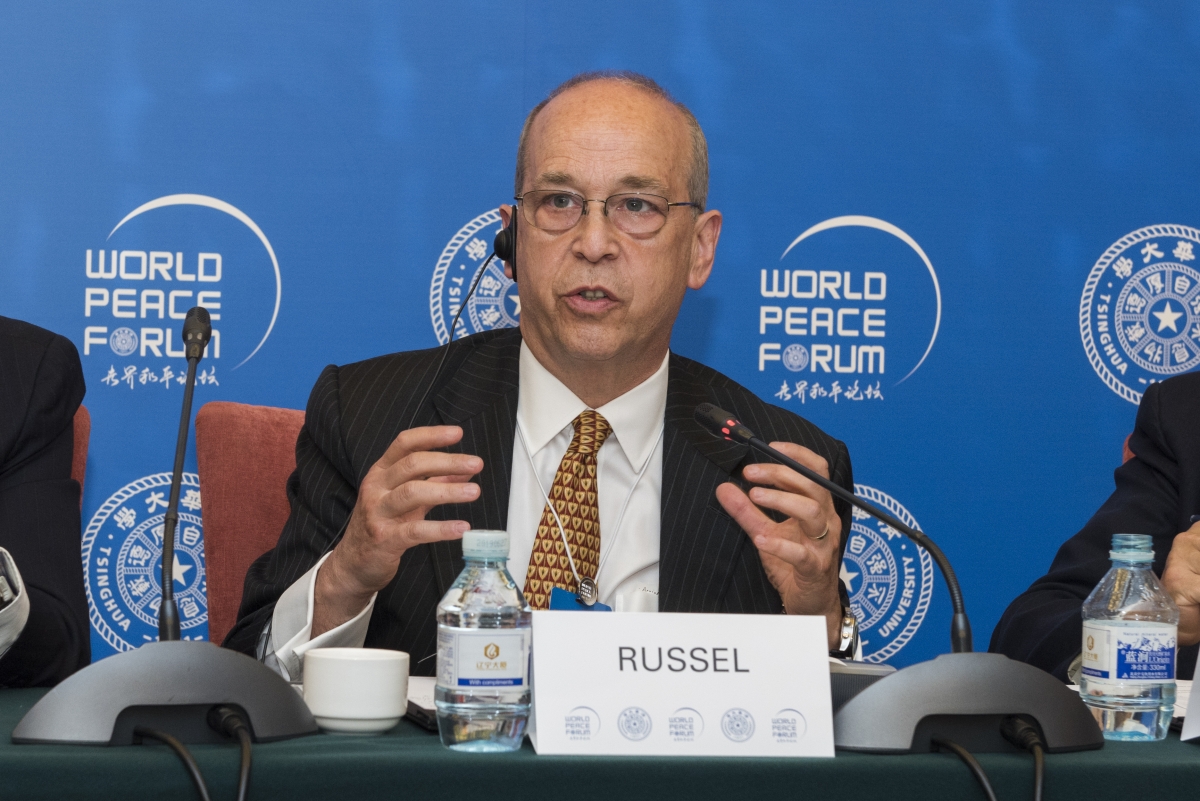 The following is the full text of ASPI Vice President Daniel Russel's prepared remarks for the World Peace Forum in Beijing.

Thank you to Professor Yan Xuetong, Tsinghua University, and the World Peace Forum for inviting me to Beijing to speak on the question of multilateralism and unilateralism.

We have just heard the Chinese perspective from Madam Fu Ying, so let me take a step back and think out loud about these two concepts.

The first thing that we should bear in mind is that unilateralism and multilateralism are matters of degree and of circumstance, not absolutes.

They can be doctrines embraced by policymakers, they can be utilitarian tools, or they can be simply biases of a culture or of a leader. And invariably a mix of unilateral or multilateral approaches makes up the foreign policy of a country – so we shouldn’t think simply in terms of a binary choice between the two approaches, or in terms of a good doctrine versus a bad one.

Perhaps we can agree that unilateralism is essentially an orientation that maximizes national self-interest, at least in the short term; that seeks to limit constraints on the country’s choices, and that attempts to preserve the greatest degree of national autonomy.

Other speakers at this conference have lamented America’s current unilateralist trend under President Trump. And it’s true that the Trump perspective sees multilateral treaties as straight jackets, sees institutions as traps, sees allies as “free-riders,” and proclaims that a doctrine of “America First” will “make America Great Again.”

American skepticism toward multilateralism has always existed to some degree in our history. So has its periodic embrace of unilateralism as an expression of national strength. But this mindset has been fed by discontent with globalization and by a certain “leadership fatigue” after a decade-and-a-half of war in Afghanistan & Iraq. It is exacerbated by a radically imbalanced distribution of wealth, by job loss and low wages from global trade competition & automation, and by anxiety over immigration and terrorism.

On top of this, and most relevant to our conversation today, there is widespread resentment in the United States towards China, based on the perception that China has unfairly taken advantage of the open American system to appropriate American technology and intellectual property, to reap the benefits of access to American universities and research institutions, to get rich in the American marketplace… without reciprocating. And that China has used that technology and wealth and power in ways that most Americans find repressive and authoritarian. There is also a concern that China is “gaming” the international system: by playing the “developing country” card; by hiding behind a policy of non-interference to avoid tackling problems in other countries; by avoiding international obligations and responsibilities.

In other words, there is a widespread perception in the U.S., and elsewhere in the West, that China’s policies in this decade are oriented to maximizing self-interest and autonomy while limiting constraints on its national power. In other words, China has been taking a unilateralist approach. You have to admit there is a striking symmetry between “the Great Rejuvenation of the Chinese nation” and “Make America Great Again”!

Basically, multilateralism is a strategy that trades the acceptance of some boundaries on independent action for the benefits of community decision-making and collective action.

If we are being honest, we should acknowledge that not every multilateral arrangement or approach is a good one. Institutions can be ineffective or misguided. The Kyoto Treaty is widely accepted to have reflected “lowest-common-denominator” temporizing. By the same token, not every unilateral action is a bad one – the UN charter allows for it in terms of self-defense.

We should also recognize that multilateral institutions and instruments are typically slow to adapt to new circumstances – whether it’s a technological advance or the rise of China -- and that this lag time is particularly problematic in an era of dramatic and rapid change (as we see with the WTO).

I’d add from my own 30 years as a diplomat – as a veteran of the UN, EU and ASEAN Summits, APEC, and other forums -- multilateral diplomacy and institutions can be maddeningly frustrating and inadequate. It’s often the most urgent issues where consensus can’t be reached. That said, where it is possible, consensus is a huge force multiplier.

Historically, the impetus for creating multilateral institutions -- the urge to create regimes for ordering international society – typically comes in the aftermath of a crisis: like the Concert of Europe after Napoleon’s defeat or the League of Nations after WWI.

Experience shows that multilateralism is only viable if the strongest players are invested in that approach and in its institutions. And the example of a strong power accepting constraints, even when not advantageous, helps reinforces the rules.

The United States, at the peak of its absolute power at the end of WWII, championed multilateralism – through Bretton Woods, the United Nations, NATO, and other instruments. This was not purely idealism or altruism. While multilateralism limited America’s freedom of action, it served its interests by binding others as well. That was a key trade-off.

While multilateralism required Americans to contribute to the global good, it got others to do so as well – and burden-sharing helps strengthen countries’ commitment to common values and norms. Perhaps the major benefit of multilateralism to a strong country like the U.S. in the 1940s, or to China today, is that it reduces the tendency of other countries to try to balance and constrain the preeminent power by banding together against it. That’s a very significant benefit.

How should we think about the U.S. and China in terms of unilateralism and multilateralism?

Despite the factors I mentioned earlier that feed American unilateralism, other dynamics pull in the opposite direction. International travel, trade, study, and communications all foster integration and collaboration among societies and nations. Cross-border cooperation is needed to deal with transnational challenges like terrorism, migration, climate change, pandemics, cybercrime, proliferation, and nuclear security.

In addition, American values and institutions have deep internationalist roots, and the benefits of multilateral or collective action are undeniable. So I think it is reasonable to stipulate that the United States, in due course, will readjust its mix of unilateralism and multilateralism to more familiar proportions.

The bigger question is whether a rising China will operate largely as a unilateralist power over the next two decades, particularly as its relative share of global wealth and influence increases, as most people expect.

Maybe that question is surprising to some given China’s loud endorsement of multilateralism and its vigorous participation and convening of international meetings. But joining or creating multilateral institutions, convening new forums, acceding to certain international conventions – none of that necessarily makes China multilateralist in practice.

Remember, multilateralism isn’t “meeting-ism,” and delivering speeches to an audience of world leaders isn’t the same as consultation and compromise.

It is the treaties that codify international law – on the law of the sea, world trade, human rights, on the environment – that are the most vital and far-reaching manifestations of multilateralism. Accepting and respecting the spirit and letter of international rules is the essential ingredient.

The heart of multilateralism is the willingness of a strong power – China – to accept constraints and be bound by exactly the same rules that apply to smaller, weaker countries even when doing so is disadvantageous to the strong country. Even when the strong country could flout the rule with impunity. To insist that self-declared “core interests” exempt a major power from adhering to international law is the very essence of unilateralism.

First, that it’s important to recognize that multilateralism should not be confused with the creation of blocs. In particular, regional blocs built around a single strong power risk the pitfall of spheres of influence. That is an unstable and divided world where regional hegemons dominate neighbors and closed economic systems lock in commercial advantages by excluding others.

Second, that meaningful multilateral institutions and instruments are built around values and principles. Leadership means inspiring others to follow you willingly in support of a cause in which all believe: not under duress; not as a transactional bargain to net trade benefits or infrastructure. China has expressed the intent to lead reform of the global governance system, but it has not answered the question: what are the principles and values that China seeks to advance that the world will rally around?

Third, that in the 21st century, multilateralism is flawed if it does not take into account the views of civil society. National authorities are not the exclusive decision-makers in global governance and no system will be stable if it does not give a voice to minorities or create safe space for public debate.

As wealthy and powerful nations, China and the United States share a common obligation to demonstrate to both our citizens and to the world the fairness and the value of international institutions. If we cannot do that consistently and convincingly, we are headed towards a more unilateralist world.