In Modi, Trump Has a Partner Who can Make U.S.-India Relations a Win-Win | Asia Society Skip to main content

In Modi, Trump Has a Partner Who can Make U.S.-India Relations a Win-Win 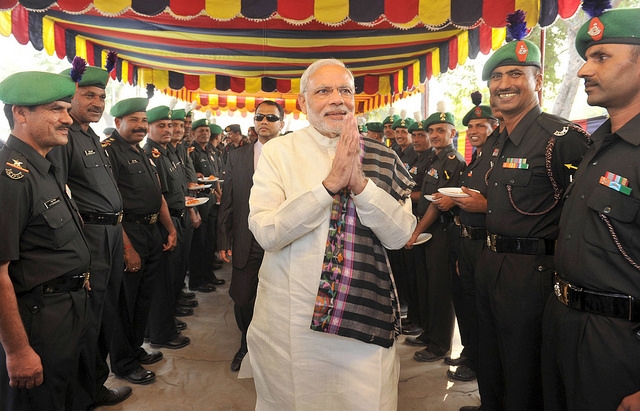 During his six-day, four-nation tour of Europe last month, Indian prime minister Narendra Modi injected energy and enthusiasm in India’s relations with Germany, Spain, Russia, and France. The high-profile tour garnered great attention and praise in India and Europe. The prime minister’s visit to the United States this week presents a similar opportunity for the Trump administration to chart a more ambitious course for U.S.-India relations. President Donald Trump should use the summit meeting to signal his intention to elevate bilateral ties to new heights.

Upgrading U.S.-India relations is a safe and winning long-term bet for an administration facing a surfeit of near-term challenges and bad press. There is broad bipartisan support in the U.S. Congress for stronger ties as well, as a deep affinity between the people of both countries. A closer partnership with a democratic and economically vibrant India that shares many of the United States’ interests in East Asia would be a clear win for the administration. To achieve it, the administration will need a successful summit followed by sustained diplomatic attention on India.

The administration can build on the strong foundation of defense and security cooperation already in place. But a realistic blueprint for closer ties will involve traversing thorny issues of mutual concern, while developing a shared set of principles for cooperation in South and East Asia. The administration will also need to push for a tangible agreement that advances economic ties, the area where the two countries have made the least progress in recent years.

At the summit, the first step for the two leaders will be to get to know one another and commit to continuing the extensive diplomatic engagement that started under the George W Bush administration and became a norm during the Obama administration. The announcement of an official visit by Trump to India in the next year would set the right tone. Equally important will be scheduling regular diplomatic visits between the two capitals and an early date for the next round of the U.S.-India Strategic and Commercial Dialogue.

Second, it would be prudent for Trump to relay that his government will maintain regular dialogue with India on two of its primary areas of concern—the United States’ Afghanistan strategy and its immigration policy.

On Afghanistan, India will look for assurance that the United States is committed to the stability of the current government, primarily by continuing its troop, investment, and aid commitments. A signal from Trump that he understands and appreciates India’s concerns and that his administration will keep India apprised of any upcoming policy changes would go a long way in building trust.

Modi is also likely to push for limited changes to the U.S. H-1B worker visa program, of which it is the largest beneficiary, and raise concerns about troubling attacks against Indians and Indian-Americans in the United States. The president can allay India’s fears by conveying that he will work with Congress to find a balanced approach to worker visas that targets abuse but does not explicitly reduce the number of visas on offer. Regarding hate crimes, he should reiterate that he will speedily and unequivocally condemn any future attacks. In both cases, follow through will be critical.

Third, in their meeting, the two leaders should strive to develop a shared understanding of their interests in the Asia-Pacific and Indian Ocean region, where the United States would appreciate greater engagement from India in supporting a rules-based regional order, managing peace and stability, and promoting shared prosperity through regional economic integration. Modi has gone further than any previous Indian leader in publicly siding with the United States on critical issues in East Asia. He has echoed U.S. concerns about resolving maritime disputes in the South China Sea peacefully. As part of his Act East policy, Modi has literally put India’s money where its diplomatic mouth had been for years. Trump should be ready to display his commitment to this vision—perhaps by finally supporting India’s bid to join the Asia Pacific Economic Cooperation (APEC) forum.

Identifying a set of shared strategic priorities will help advance bilateral security cooperation, which is closer today than ever before, including in areas likes counter-terrorism that are priorities for the President. India has become a major buyer of U.S. arms, and the two militaries hold numerous joint exercises every year. The 2016 Logistics Exchange Memorandum of Agreement, which envisions interoperability of U.S. and Indian forces, is groundbreaking, but making it a reality will depend on the two governments’ ability to build trust and facilitate greater strategic convergence.

Fourth, to take the relationship to the next level, the two leaders will need to elevate their economic partnership, which holds great promise but has cooled in recent years. Market access and intellectual property disputes have impeded progress and are unlikely to disappear. However, there are positive signs as well. Under Modi, India has significantly liberalized its foreign investment regime and is at work to become an easier place to do business. Until now, India has shown little appetite for a serious bilateral investment treaty (BIT) much less as a free trade agreement with the United States. Trump should encourage Modi to make a high-caliber U.S.-India BIT a joint goal that imbues the economic relationship with the kind of optimism and momentum the relationship has seen on other fronts.
Such a move, along with pushing for a closer partnership with India, is timely. In Modi, Trump has a counterpart that he can work with. Much like the president, Modi is a nationalistic, pro-business leader who is willing to make compromises and act decisively in pursuit of a larger goal.

Coming off landslide victories in recent state elections in India, Modi also has the political capital to make bold decisions. He is well positioned to win re-election in 2019, giving him the capability and time to see through a real advancement in U.S.-India relations.
The June meeting will be a celebration of how far U.S.-India relations have come, and an ice-breaker for the two leaders. Then—if president Trump wants—the real work can begin.