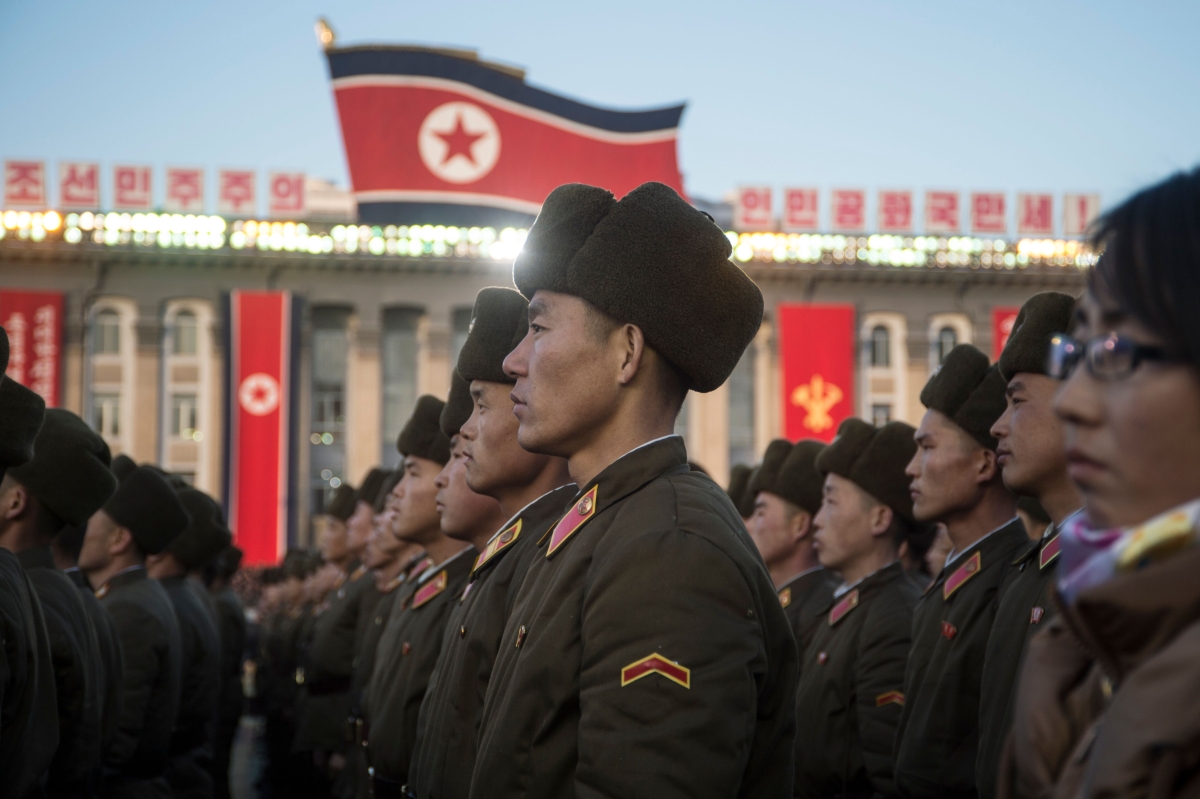 North Korean soldiers attend a mass rally to celebrate the North's declaration on November 29 it had achieved full nuclear statehood, on Kim Il-Sung Square in Pyongyang on December 1, 2017.

Following is the full text of remarks delivered at the Fall Symposium of the Institute for Corean-American Studies (ICAS), in Washington, D.C.

Thanks to Dr. Sang Joo Kim, ICAS Executive Vice President, for the introduction, and for the invitation to speak. And thanks to all of you for coming.

The process of development of any policy is always better facilitated if one is aware of the objective and overall goals the policy aims to achieve — which raises the question: what is it that we are trying to achieve with North Korea?

The most immediate and important goal is to reduce and then eliminate the threats North Korea poses via its nuclear weapons and delivery systems, otherwise known as "Complete Verifiable Irreversible Denuclearization" (CVID). "Complete" here refers to elimination of the nuclear programs, materials and facilities in their entirety, and "verifiable" means simply that we've learned not to take their word for what they will or have done. And we want to do this in a manner that will be sustained, and that North Korea cannot easily reverse — hence, "irreversible."  These are the consistent goals of U.S. policy regarding North Korea.

So what exactly are the threats posed by North Korea's nuclear program?

Of course, there are numerous other objectives regarding North Korea in terms of human rights; chemical, biological, and conventional threats; promoting reform; humanitarian issues; and a number of other areas. We cannot neglect these other objectives, but at the same time it is common sense that we must deal with the "wolf nearest the door" — the nuclear-missile challenge. We must emphasize that challenge because there exists a problematic alternative approach that puts the emphasis on lowering the temperature, reducing the level of North Korea's saber-rattling rhetoric, and its demonstrations of offensive capabilities.

The distinction between these two different sets of goals and approaches is important because of what we've learned from experience — from the past pattern of North Korean negotiating behavior — examples of which include the U.S.-North Korean Agreed Framework, the Six-Party Talks, and other processes.

We've learned that lowering the temperature, enacting a freeze, and creating a “conducive environment” may be important precedent conditions for negotiations, but they do not solve the problem. Putting bad behavior "in remission" by hitting the "pause button," in other words, has never led to a net reduction of the actual threat. And experience proves that renting a little peace and quiet by making concessions to North Korea — in effect paying protection money — does not end well either.

Now, you can argue about whether North Korea is stalling to buy time for its covert programs, to desensitize the world to its possession of nuclear weapons, or to extract some profit from the world's sense of relief that a crisis was avoided — before cycling tensions back up. But you cannot argue with the fact that North Korea has convincingly demonstrated that it hasnuclear weapons, and that such weapons have enabled it to force world leaders such as President Trump and China’s President Xi Jinping to deal directly with Kim Jong-un, and treat a country with a GDP on par with Albania with respect.

So, how should we tackle this situation? What's the prognosis?

Well, setting aside the prospect of thermonuclear war (since there's not much planning required for that eventuality), the North Korea drama can end in essentially one of two ways. The world could find a way to coax, cajole, or coerce North Korea into a process of halting, then rolling back, and ultimately eliminating its nuclear program, and divesting its nuclear holdings. Or it could end in an alternative future — "Scenario B" that has North Korea succeeding in forcing or inducing the world to accepting it, however grudgingly, as a nuclear power — another Pakistan.

My thesis is that as difficult as our efforts to achieve the first scenario have been, the second is an outcome that we simply cannot live with. While I recognize that North Korea has "nukes" and in that sense is a de factonuclear weapons state, what I'm referring to in this "Scenario B" is a normalized nuclear weapons state that is largely free from sanctions, and allowed the prerogatives that "normal" nations exercise. True, the world has allowed other non-Perm Five nations to reach this status — India and Pakistan.   But it would be a fallacy to think that a normalized nuclear North Korea would behave like India or even Pakistan, which developed nuclear weapons in the context of a deterrence standoff with each other.

That last concern is not a throwaway line. True, the South Korea of today has a very progressive, pro-rapprochement government. However, that government abides by a single-term presidential system that has historically seesawed from hard left to hard right. Can we honestly believe that a future South Korean government will sit still after North Korea wins acceptance as a nuclear peer, and, inevitably, when the U.S. extended deterrent is undermined? Can we honestly believe that there is a scenario in which North and South Korea each acquire nuclear weapons, and Japan does not? Moreover, why would the solution that worked for North Korea not also be worth considering by Taiwan? By Vietnam? By Indonesia?  And that's just considering Asia.

So, if you accept the thesis that we cannot live with "Scenario B" – the "oops" scenario, in which North Korea trades a halt, or a pause at least, in threatening behavior for even tacit acceptance, normalization, or legitimization — then we should be clear-eyed about the need to engineer a roll-back and elimination of the country's nuclear weapons: Complete Verifiable Irreversible Denuclearization.

What does that mean in practical terms? No one knows better than I do that engineering a CVID outcome is difficult — and I'll admit in all humility that I don't have theanswer.

But what I've learned over a 33-year career in diplomacy and foreign policy is that even in tough situations, where there is no easy answer or magic bullet, staying focused on where you want to go, and avoiding mistakes, are the two things that will vastly improve the odds of success.

It is a mistake to allow Five-Party unity to break apart. Rapid Inter-Korean rapprochement is badly out of sync with the stalemate on the nuclear track. The U.S. embrace of Kim Jong-un has caused China to revert to old patterns of support for the DPRK. Further, Japan has been marginalized.

It is a mistake to treat denuclearization as a concession for which we have to bribe North Korea. The UN Security Council Resolutions under Chapter VII have the binding force of international law — they are mandatory, not optional. The issue is thus compliance, not conciliation. And in any case, rewarding good behavior comes, logically, afterthe good behavior, not before.

Finally, it is a mistake to take the "Peace Treaty" bait. The Korean Armistice Agreement is adequate to avoid conflict on the Peninsula, making a peace declaration or treaty at this point at best a diversion from the real issue — the nuclear issue. More likely, such a declaration or treaty would be used as a springboard for the campaign to evict U.S. forces from the Korean Peninsula.

My bottom line is this: We were not able to prevent North Korea from manufacturing nuclear weapons and delivery systems, but we must be able to prevent it from profiting from them and legitimizing them. For the past two years, Kim Jong-un has been running the show. In 2017, he ramped up tensions to a fever pitch. In 2018, he took advantage of the Pyongchang Olympics, the progressive government in Seoul, and an "atypical" President in the United States, to turn himself into an apostle of peace and Global Zero — to become a "very honorable" guy. He wrote, produced, directed, and starred in the Panmunjom, Pyongyang, and Singapore Summits.

Now, it's time for us to take back the initiative. Thank you.