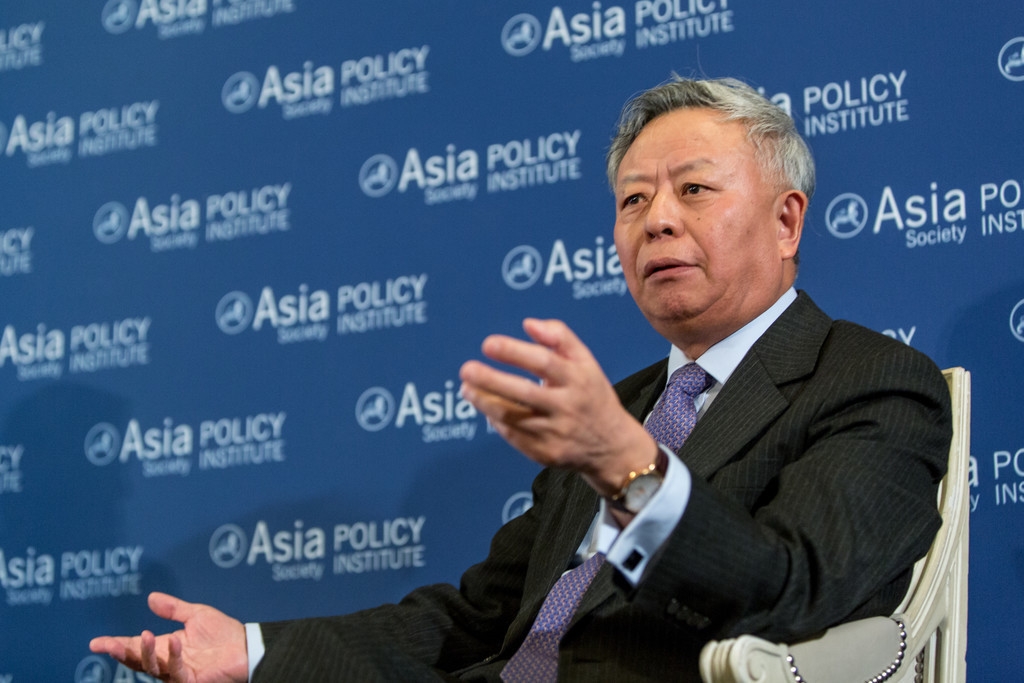 WASHINGTON, D.C. — On April 13, 2016, in an event with Asia Society Policy Institute President Kevin Rudd, Asian Infrastructure Investment Bank (AIIB) President Jin Liqun emphasized that there was "vast room for cooperation" between the AIIB and the World Bank.

In the wide-ranging conversation, Rudd noted Jin’s unique and diverse background that included a Master’s degree in English Literature and Jin’s subsequent love for Shakespeare. Jin discussed not only his affection for Shakespeare and historical plays, but pointed to the key lessons learned from history explaining, “[history] will show you how to avoid mistakes which were made repeatedly by humans over the centuries.”

Rudd followed, asking, “What are the historical lessons you’ve picked up from [other multilateral development institutions] which can be applied productively to the future of the institution you now head?”

Jin pointed out the successes of the Bretton Woods institutions, explaining “all of these institutions have contributed so much to development and poverty reduction over the decades.” On the other hand, Jin noted, “those institutions were created 7 decades ago…under different historical circumstances and we [(AIIB) has been] created in this new age.”

On the AIIB’s relationship with other multilateral development banks (MDBs), he emphasized the importance of cooperation and coordination going forward. Given the large, risky, and expensive nature of infrastructure projects, Jin said, “it’s not financially feasible for one institution to pour resources in one project. So, we work together. When we work together, we can actually help the host country to improve its macroeconomic policy environment.”

Jin added, “By working together with other MDBs we can pick…very, very good projects, which can meet our standard.” He noted three important criteria that the AIIB will apply to projects; that they be financially sustainable, environmentally friendly, and socially acceptable.

On the AIIB’s relationship with the status of private capital markets, Jin said, “private sector resources can also be mobilized for a very good reason….Asia is awash in liquidity…Asian savings are very high, but Asia is lacking in a kind of mechanism to recycle all these resources. So, when we work together, we can help…savings to be better utilized…obviously a rising tide lifts all the boats. A more developed Asia means more business for financiers.”

He added, “When we promote infrastructure development, when we develop Asia's economy, probably we can have a better integrated market, and Asian countries could catch up in…regional integration.”

With respect to the governance rules of the AIIB, Jin stated, “the designing of this institution has been the work of a very, very, very strong team. We have a high number of American professionals of [the] highest caliber, and they've been working very hard creating basic documents of this institution, and they have years of experience working in the World Bank, in [the Asian Development Bank]….So this is the product of so many experts with years of experience working at other institutions; that's something we should never ever forget.”

Jin went on to explain influences from private sector business models on certain governance structures such as a non-resident board and accountability. He cited the advances in “modern technology” in allowing an ongoing basis of communications with board members which are non-resident.

When asked about the timeline for the announcement of their first project, Jin remarked, “Maybe in June we could have the first batch of projects including co-financing projects with the World Bank, ADB and other MDBs, and freestanding projects prepared on our own.”