Indonesia and COVID 19: At the Crossroads | Asia Society Skip to main content

Indonesia and COVID 19: At the Crossroads 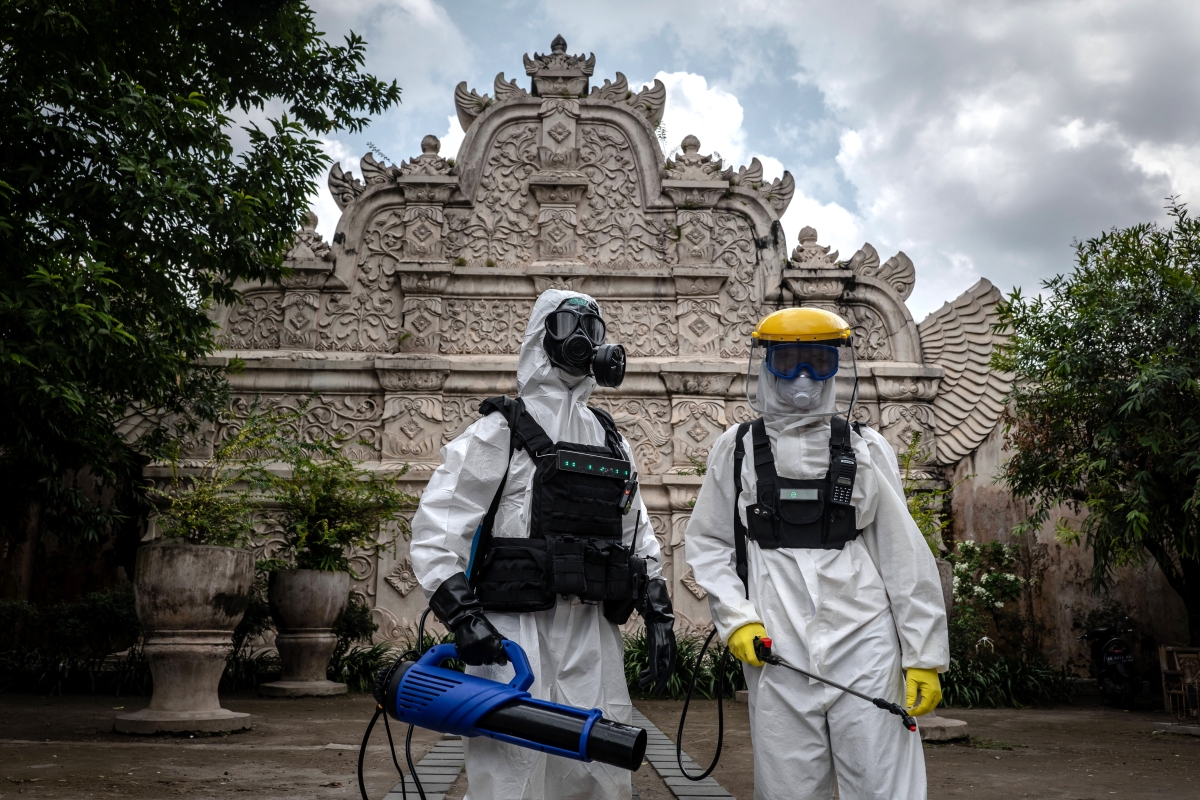 Disinfection volunteers stand as they spray disinfectant at the Taman Sari Water Castle complex, a popular tourist attraction, to prevent the spread of COVID-19 on March 31, 2020, in Yogyakarta, Indonesia. (Ulet Ifansasti/Getty Images)

Indonesia – Southeast Asia’s largest and most important nation - stands at a crossroads in its fight against the COVID-19 pandemic.

Widodo has resisted calls for nation-wide lockdown, worried about the devastating effect this would have on the millions of poor Indonesians who eke out a precarious day-to-day existence and the inability of the national government to provide for a nation living in isolation.

But in recent weeks, under pressure to act more aggressively, Widodo’s government has declared a “national emergency”, strengthened its COVID-19 task force, and given virus hot spots like Jakarta authority to implement tougher social distancing measures.

The government has banned the annual exodus known as mudik, in which millions of Indonesians traditionally return to their home towns to celebrate the end of the fasting month. Domestic air and sea travel have been shut down.

While not often reported in mainstream media, provincial authorities, communities and individual citizens are stepping in to help fight the virus where the central government is absent, showing the trademark resilience of Indonesians and their willingness to help themselves.

The Government now wants the nation back to “normal” by the middle of the year. President Widodo is pinning his hopes on a significant ramp-up of testing levels, contact tracing and isolation for those infected with the virus.

The government’s desire to get Indonesia working again is understandable. But the timing of any decision to ease social distancing measures looms as a critical test.

Easing Indonesia’s soft lockdown too early will hand momentum back to the pandemic, especially in a country in which the true number of infections is almost certainly substantially higher than the official count. Indonesia’s economic pain could then extend into the second half of 2020 or even 2021.

At that point, Indonesia’s already severe COVID 19 crisis could become hydra-headed. In addition to a still-unfolding pandemic and economic shutdown, Indonesia could face two further crises – a financial shock with foreign debt defaults and food insecurity and social unrest as a result of rising poverty.

The sprawling Indonesia archipelago encompasses nearly 270 million people. COVID 19 is present in all 34 provinces. Yet Indonesia is reporting only 12,438 COVID 19 cases (as of 7 May), fewer than the tiny city-state of Singapore.

The high number of reported deaths (895) as a percentage of these cases and the very low rates of testing to date are strong indicators that the true number of infections is substantially higher.

Just how high is hard to know. Modeling the possible spread of the virus in a country like Indonesia is an imprecise science at best.  Despite Indonesia’s young population, under some low intervention scenarios, the University of Indonesia has forecast up to 2.5 million cases and more than 240,000 deaths.

The strains on Indonesia’s fragile public health system are clear.  Medical supplies, protective equipment, and ventilators have been in short supply. Front line medical teams are being hit hard, with many doctors falling ill and dying.

We may never know the extent of the mortality rate. Many poor Indonesians will fall ill and die without ever seeing a hospital.

The economic damage President Widodo fears is also clear. Tourism has stopped. Export revenue has been slashed by the global demand shock and low prices for Indonesian commodities like oil (a major source of government funds) and palm oil. Domestic demand has slumped and many businesses have shuttered their doors. Tens of millions of Indonesians who live day-to-day in the informal sector of the economy are losing their livelihoods.

Indonesia’s currency has been one of the hardest hit in Asia, falling to lows against the US dollar not seen since the financial and political crisis of 1998.

The IMF has forecast Indonesia’s economic growth to fall from 5 percent in 2019 to 0.5 percent in 2020. But this baseline forecast is premised on the pandemic fading in the second half of 2020 and economic disruption being contained largely to the second quarter of the year. These assumptions may prove more hopeful than real.

Beyond the economy, Widodo’s greatest fear is a rupture in the social fabric of Indonesia like the one that occurred during the 1997-98 Asian financial crisis.

Indonesia is a more resilient society today than in 1997-98. But large-scale protests could have unpredictable effects, potentially weakening Indonesia’s democracy and further strengthening the role of Indonesia’s security forces at the expense of its civilian institutions.

Indonesia’s government knows that hunger will drive unrest. It is stepping in with cash transfers and food supplies.  Greater poverty, disrupted supply chains, hoarding, and higher consumer prices, rather than food shortages, are likely to be the biggest enemies.  But the government will keep a close eye on rice export bans from countries like Vietnam.  A potentially harsher than normal dry season in Indonesia could also affect rice crops.

There are other potential flashpoints. The anti-Chinese racism that is latent in much of Indonesia has already driven some protests.

The Government has responded to these economic and financial pressures by lifting a legislated three percent cap on annual budget deficits to five percent. Stimulus packages totaling some $USD33.4 billion are being delivered.

These packages include support for hard-hit sectors like tourism and aviation, personal and corporate tax relief, new funding for medical services, and social protection measures. The Government is also lowering the corporate income tax rate and the Central Bank has taken steps to increase liquidity.  Indonesia has taken advantage of emergency loans from the World Bank and the Asian Development Bank.

For the time being, Indonesia should be able to manage the pressures on its relatively modest $US410 billion in foreign debt. It has a foreign exchange war chest of some $US120 billion and is raising funds on the international market through a new long-term “pandemic bond”.

The real financial risk for Indonesia lies beyond the immediate. If the pandemic is severe and longer-lasting, and the economic damage extends well into 2020 or even 2021, even a more resilient Indonesia could find itself in trouble.

The government could face a perfect storm of a depreciating currency, ongoing collapse in economic activity, a shortage of global capital to refinance debt, and rising government borrowing to fund medical and social security needs. Refinancing is already a growing risk, especially for many businesses.

The lessons from past financial crises are to act early. As others have argued, there’s an opportunity now for close partners of Indonesia like Australia and Japan to give Jakarta extra firepower to keep its financial system stable and ensure the confidence of global markets.

This could be done quickly and easily through significantly enhanced bilateral currency swap arrangements.   In Australia’s case, the current swap arrangement with Indonesia is not intended to operate in a crisis. Standby loans could also help.

At a time of heightened geopolitical contestation, when China has made high-profile deliveries of medical supplies to Indonesia, such action would both help Indonesia and support the longer-term economic, security and geopolitical interests of Indonesian partners like Australia, Japan, and the United States.

There’s more that can be done. Some bilateral aid programs are already being re-geared to support Indonesia through the pandemic, alleviating social impacts, helping Indonesia shift to on-line learning, and supporting good economic and fiscal policymaking.

More personal protection equipment remains an urgent need. Indonesia’s partners can also work together to ensure the free movement of agricultural commodities during the crisis and advocate for the removal of export restrictions.

Even though the pandemic has a long way to run, Indonesia’s partners should also be thinking now how they can best support Indonesia in a recovery phase, where the needs will be different. The IMF has noted there will be an ongoing need for concessionary financing, grants, and debt relief. Creating national stockpiles of essential medicines and medical equipment and rebuilding health systems will be a priority for all countries emerging from the pandemic.

Bilateral donors can support lessons-learned exercises and help get Indonesians back to work by backing re-training programs. Countries can run a ruler over their trade arrangements with Indonesia, to maximize the ability of Indonesian exports to enter markets unhindered by high tariffs or other barriers.

Indonesia is one of the world’s largest democracies and most populous nations. It is Southeast Asia’s natural leader and its course in coming decades will be a critical factor in determining the shape of a new regional order. It is a country of the future: it will remember who was with it at its moment of greatest crisis.