Daniel Russel Speech to the Council of American Ambassadors 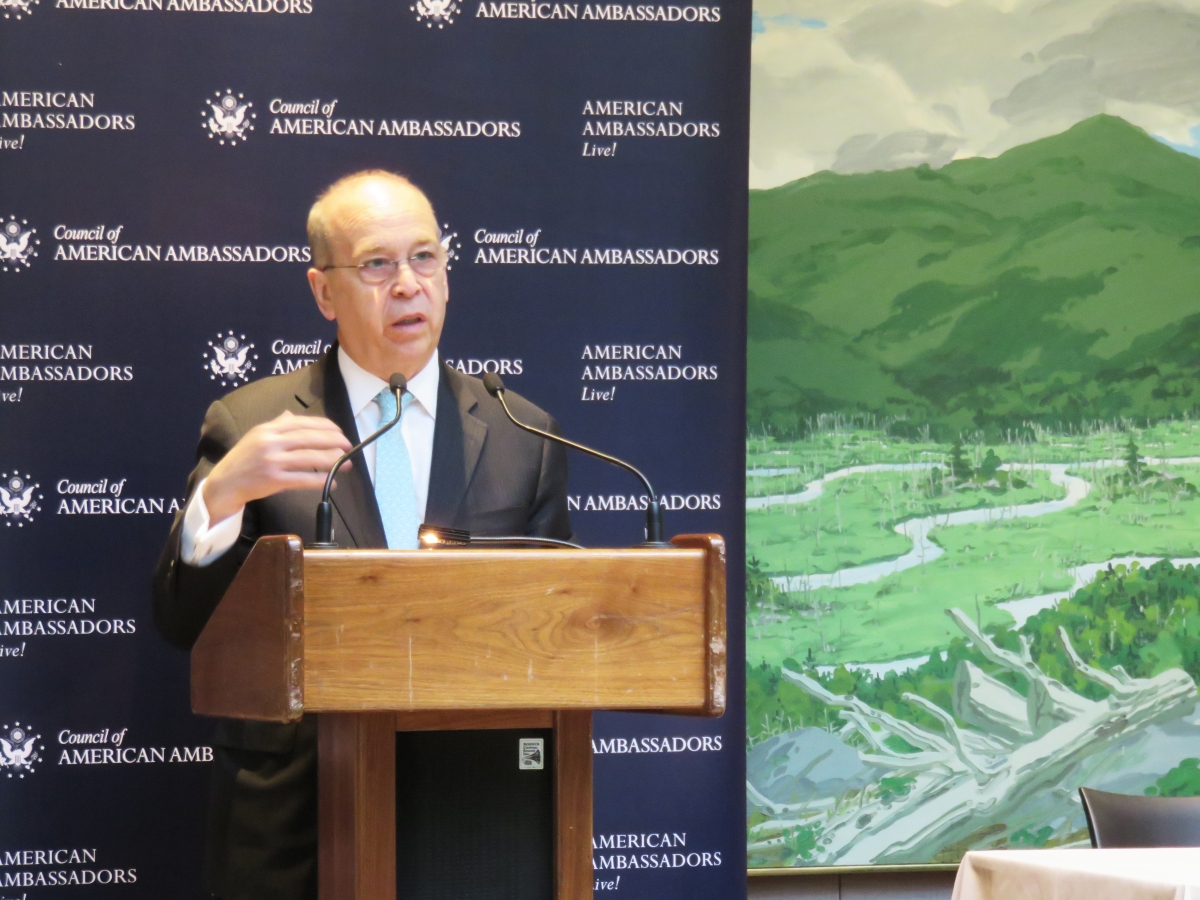 The following is the full text of ASPI Vice President of International Security and Diplomacy Daniel Russel's address delivered to the Council of American Ambassadors on November 13, 2019.

It is a pleasure to be invited back to the Council and take part in this discussion about economic diplomacy in 2020.

We just heard very thoughtful and articulate analysis of US economic statecraft in the Middle East from Frank Wisner.  Much of what he observes and concludes in that context is equally applicable to the region I know best, the Asia Pacific.  Among the insights, he has offered is the important recognition that the United States no longer has the luxury of operating in the world without an intelligent strategy.

I think it is clear that America’s behavior over the past 3 years has created unprecedented opportunities for China to expand its influence and in some respects dominance (if not hegemony) in its immediate neighborhood, as well as far afield in Africa and parts of Europe.

We should remember that the ‘yin and yang’ of Chinese behavior is strategy on the one hand and opportunism on the other.

The U.S. factor – the “America First” dynamic – serves as the backdrop to the recent growth in Chinese reach and influence.  Actually, it’s probably more of an accelerant than a backdrop.

And America’s disengagement, its political infighting, and its deviation from longstanding principles and policies have created new conditions that China has exploited.

As China’s economy and trade ties have expanded, particularly over the past two decades, Beijing has used trade, investment and to some extent overseas development aid (ODA) as inducements to various developing countries.

At the same time, particularly in the last decade, we have seen China use its economic power as leverage to punish behavior that irritated Beijing.

Given that the CCP is a Leninist institution, it shouldn’t surprise us that for Beijing’s leaders, “economic diplomacy” is first and foremost the use of economic levers to support political objectives.

And as its political objectives evolved, Chinese economic diplomacy did too.

The decade following China’s accession to the WTO in 2001 was the “participatory” phase during which China began actively engaging in multilateral economic governance and trade agreements, particularly in the Asia Pacific.

A 2nd phase began after the 2008 recession, when China’s economy, and its massive stimulus investments, served as the engine of global recovery – propelled China to outstrip Japan & become the world’s 2nd largest economy.

Now we’re in what you could call the “leadership” phase – both in the sense that China has claimed and asserted leadership in multilateral organizations, and that it has launched its own economic initiatives.

There is a wide range of examples of newfound Chinese leadership:

But the ultimate vehicle of Chinese economic diplomacy and the one with the most direct geopolitical consequences is surely the Belt and Road Initiative – the multi-billion dollar worldwide infrastructure program – B.R.I.

BRI is the vehicle by which the “China Dream” of growth, power, and prestige seems to connect with other countries.

It’s the vehicle for China to show leadership; to provide a public good; and to fill the infrastructure development gap, which is very real.

There are some people in some countries who view BRI positively, as a kind of 21st century Silk Road uniting the Eurasian Continent in a productive network of trade and energy routes.

Many others see a heavy-handed strategic play for hegemony…reminiscent of the old Imperial Chinese tributary system of vassal states.

There are sharply conflicting views of BRI, partly because there are so many drivers behind BRI.   There’s its stated goal of infrastructure development, but beyond that is the well documented Chinese need to export surplus capacity in steel, cement, and construction.

BRI serves also as a vehicle for dealing with the remote, underdeveloped western provinces that missed out on the Chinese economic miracle and to stem the threat of terrorism and extremism spreading from the Central Asian countries on its unstable western borders.

China is highly dependent on vulnerable oil shipments through the Straits of Malacca, so it makes sense to use BRI to diversify energy sources & routes.

It has been a mechanism for leveraging China’s huge capital account surplus and may help with Beijing’s goal of internationalizing the Yuan and growing it as a global reserve currency.

But there are several other ways in which BRI – the centerpiece of China’s economic diplomacy –generates geostrategic advantage for Beijing.

Now, none of this is to say that China’s economic diplomacy is an unqualified success.  To know China is not necessarily to love it.

Even Chinese officials themselves are aware that their approach to international economic diplomacy is flawed – too heavy on infrastructure projects, creating friction and backlash in many countries, highly vulnerable to changes in host country governments, a burden on the Chinese treasury, and often simply not producing the intended long-term benefits in terms of political influence.

So some efforts are being made by Beijing to adjust BRI accordingly, but that is a steep, uphill battle given powerful vested interests, like the SOE’s.

Chinese government agencies have surprisingly limited knowledge or control over their companies’ overseas behavior, even though the communist party has become more intrusive in ensuring that companies are politically correct at home.

Add to that the political risk to bureaucrats of admitting that the signature project of Xi Jinping is deeply flawed…and it’s easy to understand why relatively few improvements have been actually implemented.

But at the end of the day, the strongest driver of a geopolitical in China’s favor may not be what Beijing is doing…but what Washington is not doing.

To the extent that China is the “only game in town,” we will inevitably see a greater degree of accommodation for its interests, a reluctance to defy it, and a growing regional dependency on China overall.

I travel extensively in Asia and many of my former counterparts are still in senior positions in government.  There is a widespread sense that America First has ceded the field to the Chinese.  They tell me again and again that if the U.S. disengages, then China is the only game in town.

I was in Hanoi recently when the White House announced that neither the President, the Vice President, nor the Secretary of State would attend last week’s ASEAN summit.  Sent a shiver of fear up Vietnamese spines.

Add to that America’s withdrawal from important international agreements like the Paris Climate Accord and the TPP trade deal.

And what many of my former counterparts point to is the President denigrating allies as “free riders” and turning a blind eye to threats (like NK missiles) that aim directly at our allies but not at U.S. territory.

So, one trend is the perception of a self-interested and distracted U.S. that is disengaging from international rules and institutions.

That is combined with an increasingly activist and assertive China with growing economic leverage and a willingness to use it.

Taken together, these trends add up to a highly undesirable shift in the geopolitical landscape.

And most countries want the U.S. to actively engage in the world – if only to balance China and provide options.  The unsettling specter of a muscular, hegemon burnishes America’s appeal and feeds the international appetite for a (peaceful) countervailing force.

Faced with China’s size; it’s escalating checkbook diplomacy, its muscular assertiveness, and its growing domination of multilateral institutions, many countries in Asia and the world are yearning for American engagement and reliability and leadership.

But the thing to remember is that while they are yearning for the America they knew throughout the post-war period, they’re not waiting around for it.  And neither is China.

Before I came over this morning I looked back over the remarks I made when I spoke to the Council two years ago about China’s ambitions and the implications for the U.S.  Here’s what I said to this group in 2017:

“All of you know from your own service, no country is so rich & powerful that it can afford not to be smart.

That’s why I think it’s essential that we respond to China’s ambitions & behaviors with discipline, determination, and by staying true to the values & principles that have always made us great.”

What more can I say?  I’ll stop here and take your questions.