In part five of the executive summary, Daniel H. Rosen describes the projected economic gains that China’s Third Plenum reform program will create for the world and compares these with the outcomes under alternative scenarios. For more on this topic, read Chapter 3 of the full report.

Building on our assessment of the scope, pace, and prospects for economic overhaul in China, we explore the impacts both domestically and internationally. China has made many policy breakthroughs over the past 35 years, and these have been felt abroad in various ways. But when China set out to reform and open up in 1978, only 2% of world GDP was at stake; today, China accounts for a hefty 15.4% of global GDP. China’s marginal contribution to global growth was near zero in 1978 and was inaccessible to other countries. By 1989, China’s share in global growth was 4%, and by the Asian Financial Crisis in 1997, it was 11%. For the past three years, this share has averaged 28%. China is more interdependent with world markets than nations going through a middle-income policy shock have been in the past. China’s announced timetable to make the proposed changes is short. All this means China’s current reforms will shock the world economy.

To explore China’s long-term potential growth in light of the promised regulatory adaptations, we use a growth accounting framework that combines assumptions about inputs and efficiency gains. This is a stocktaking of labor, capital, and total factor productivity, or additional gains in GDP that come from technological change or a better policy environment. We conclude that in the best-case scenario — a soft landing through 2020 — reforms permit the redeployment of capital from wasteful uses to high-return sectors, so capital stock growth and TFP improvements deliver a combined GDP growth rate of 6%. That is something to be proud of, though lower than past and current rates. If reforms stall, the productivity gains from adjustment will be lost, and increasingly private capital may or may not continue to invest, leaving China with at most 3% growth in a hard landing scenario or 1% at best in a crisis. Figure 1 illustrates these three conjectures. 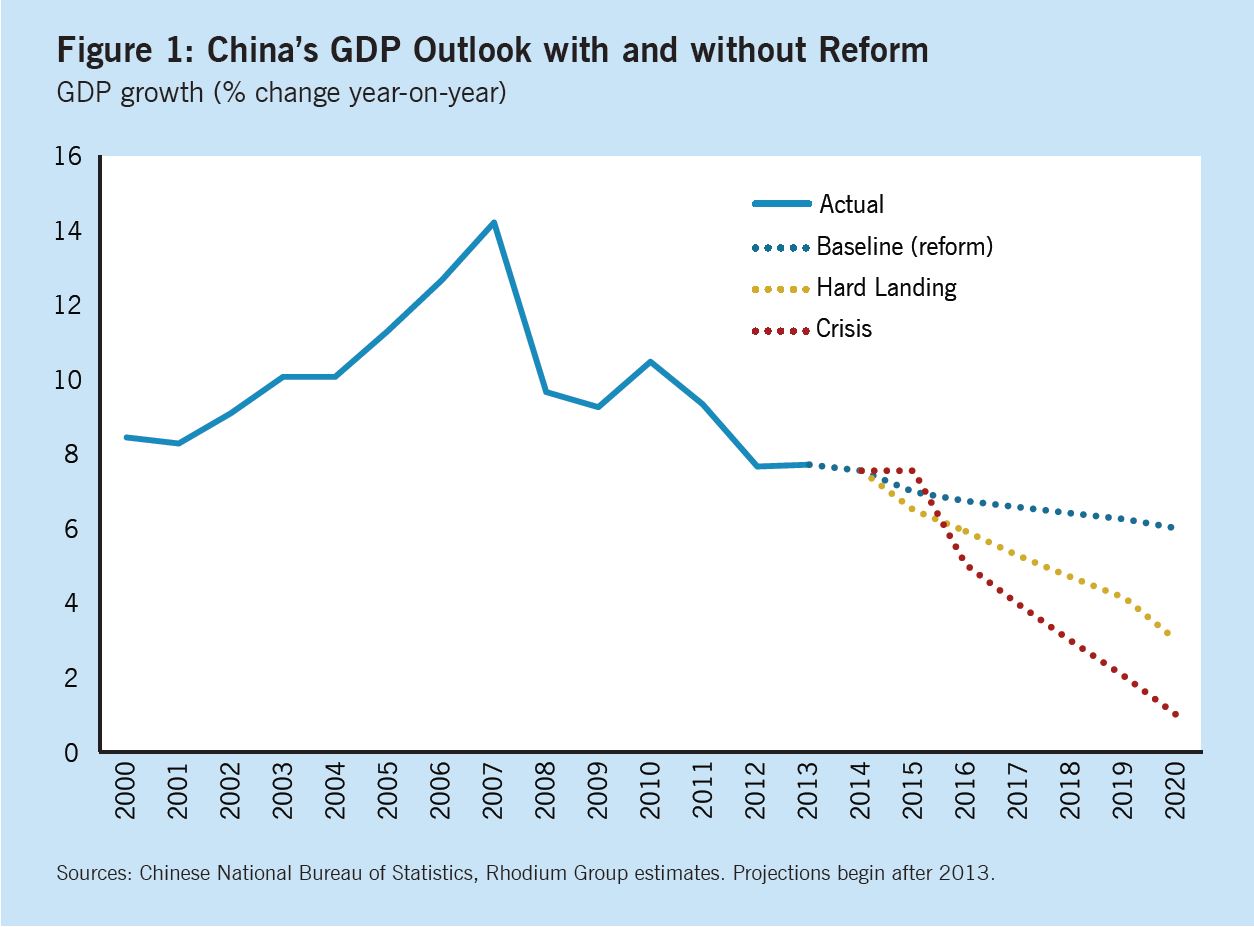 Those differential growth rates add up, and the stakes are high. China’s 2020 economy will be more than $2 trillion larger with reform than without — a difference the size of the entire Russian economy today.

We combine these scenarios — baseline (reform), hard landing, and crisis — with the picture of regulatory reform to help us think about China’s trade and financial interaction with the world in 2020. These projections are rough approximations of potential outcomes, but are valuable for exploring how today’s reforms impact tomorrow’s growth in China and abroad . Substantial implementation of regulatory reform is our baseline scenario: reform is difficult, but not as difficult as dealing with growth collapsing to 1–3% levels. Under reform, China adjusts to a roughly balanced current account position by 2020, from the 2% of GDP surplus it runs today. This results from a trade deficit of $137 billion (in 2013 dollars) and a net investment income surplus of $145 billion because of a better external asset portfolio: both of these are reversals of current conditions. Imports rise faster than exports, helping alleviate trade policy pressures, and China earns higher returns on external assets as a result of more direct investment by firms rather than low-interest government debt bought with foreign reserves. By the end of the period, China’s official foreign exchange reserves will be decreasing modestly, which is consistent with Beijing’s stated intentions.

The hard landing and crisis scenarios illustrate the erosion of benefits that foreign economies and firms would encounter if reform derails. Figure 2 summarizes the trade scenarios compared with the 2013 starting point. Imports and exports fall in both downside scenarios; the growth of China’s imports of foreign goods and services is hit particularly hard. Instead of the good news trade deficit under reform, in the crisis scenario China reverts to big trade surpluses that reach more than 5% of GDP, a level last seen in 2005–2008. 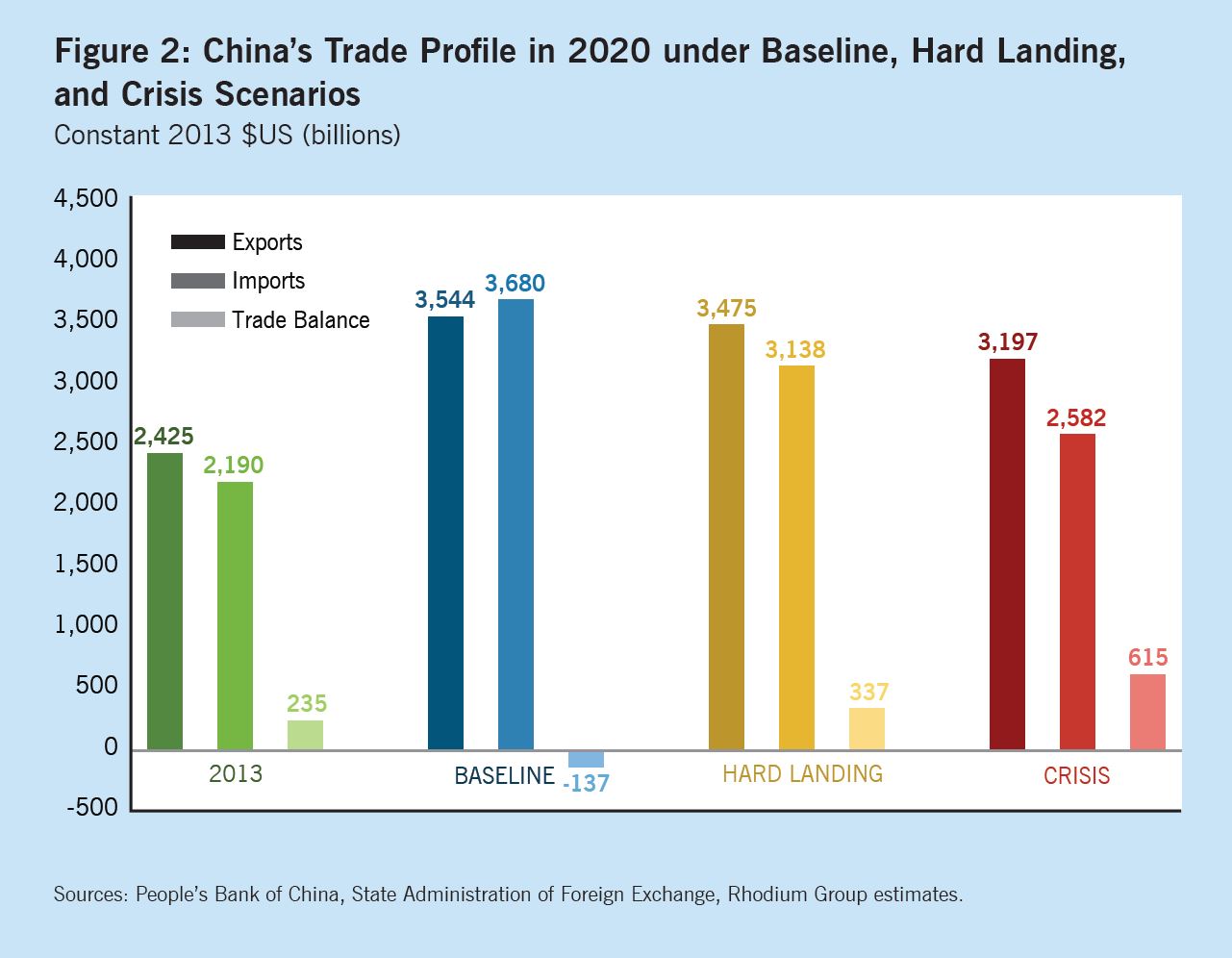 On the financial side, still greater adjustment lies ahead because cross-border financial flows have been more heavily restricted to date. Under a reform scenario, China continues to attract a growing level of FDI, while outbound FDI continues to boom, roughly doubling by 2020 to an annual level of $160 billion. (These are conservative estimates.) Investments in securities (portfolio investment) in both directions increase dramatically as a result of financial account and capital market liberalization, so that by 2020 more than $1.1 trillion in annual two-way flows takes place. Under these assumptions, roughly $3.5 trillion in capital flows from China into foreign stocks, bonds, and other assets, while $2.4 trillion in foreign savings pours into improving Chinese capital markets over the next seven years. That $3.5 trillion of outbound investment is almost 20% of the entire U.S. stock market capitalization today, or roughly the entire value of the NYSE Europe’s stock market capitalization. This presents a tremendous opportunity for financial intermediaries, and for savers both inside and outside China to diversify their portfolios to healthy effect.

The outlook for China’s financial interaction with the world is even more sharply affected by a failure to stay the reform course. Figure 3 illustrates the differences. In a hard landing, China’s 2020 external assets grow to $10.8 trillion instead of $11.2 trillion, and liabilities hit just $5.8 trillion instead of $8.6 trillion. These changes result from lower GDP, a slowdown in inbound FDI as foreign investors are scared away and market opening is delayed, substantially lower two-way portfolio flows, and renewed capital controls and other measures to soak up foreign reserves because of the current account surpluses. In the crisis scenario, asset growth is smaller still. In addition to a lower GDP, a crisis triggers restrictions impeding flows in all categories, but especially short-term portfolio investment, and leads to substantial capital flight through grey channels. Typically in such crises, this would deplete foreign reserves, but we assume that outflows are not large enough to offset the ballooning trade surplus as a result of crashing demand at home and a drop in commodity prices globally; thus, we see reserves increase further to $5.9 trillion by 2020. 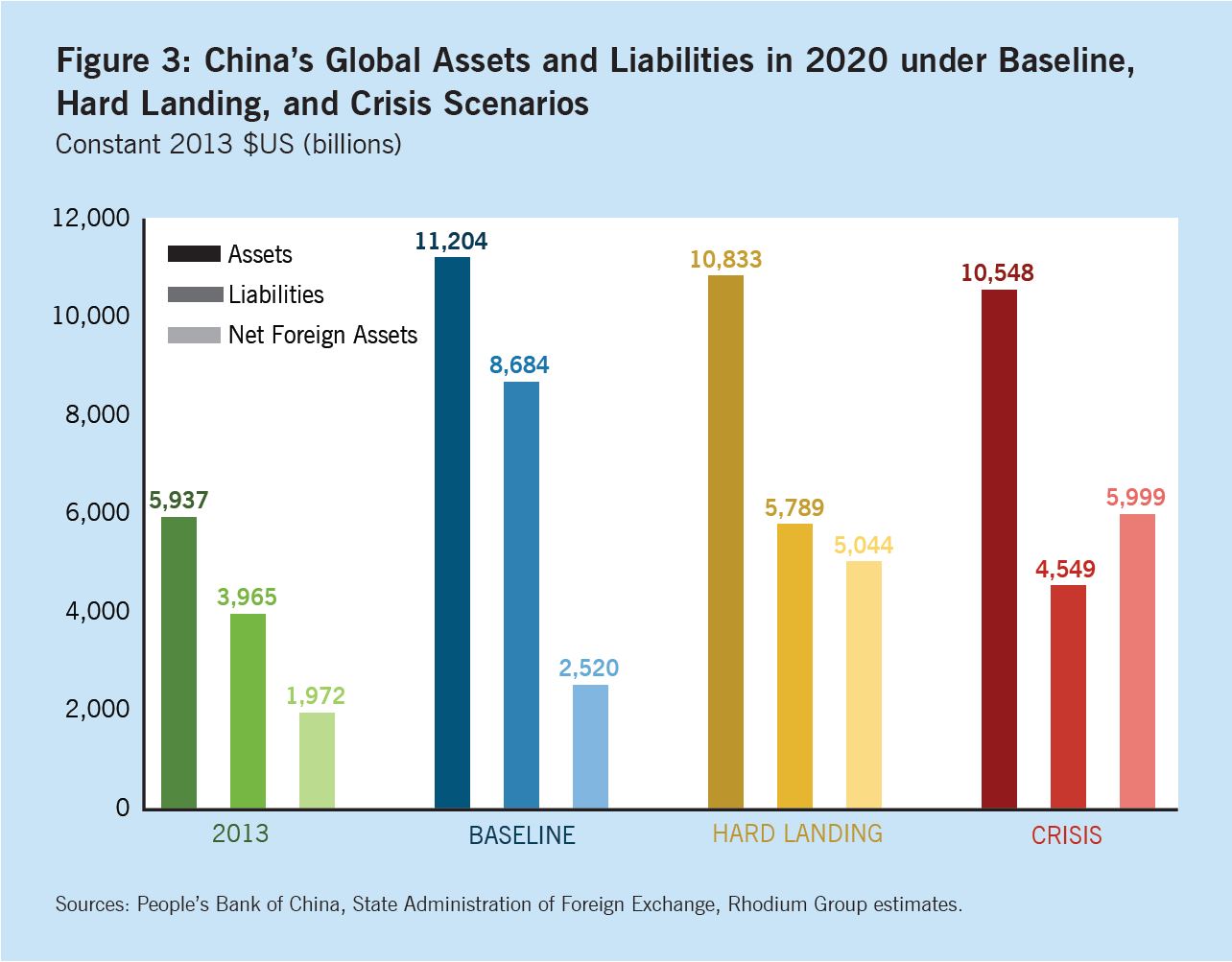 Other Parts of the Executive Summary

Part Two: Why China's Growth Model Is Not Working Anymore