No Limits: The Inside Story of China’s War with the West | Asia Society Skip to main content

No Limits: The Inside Story of China’s War with the West 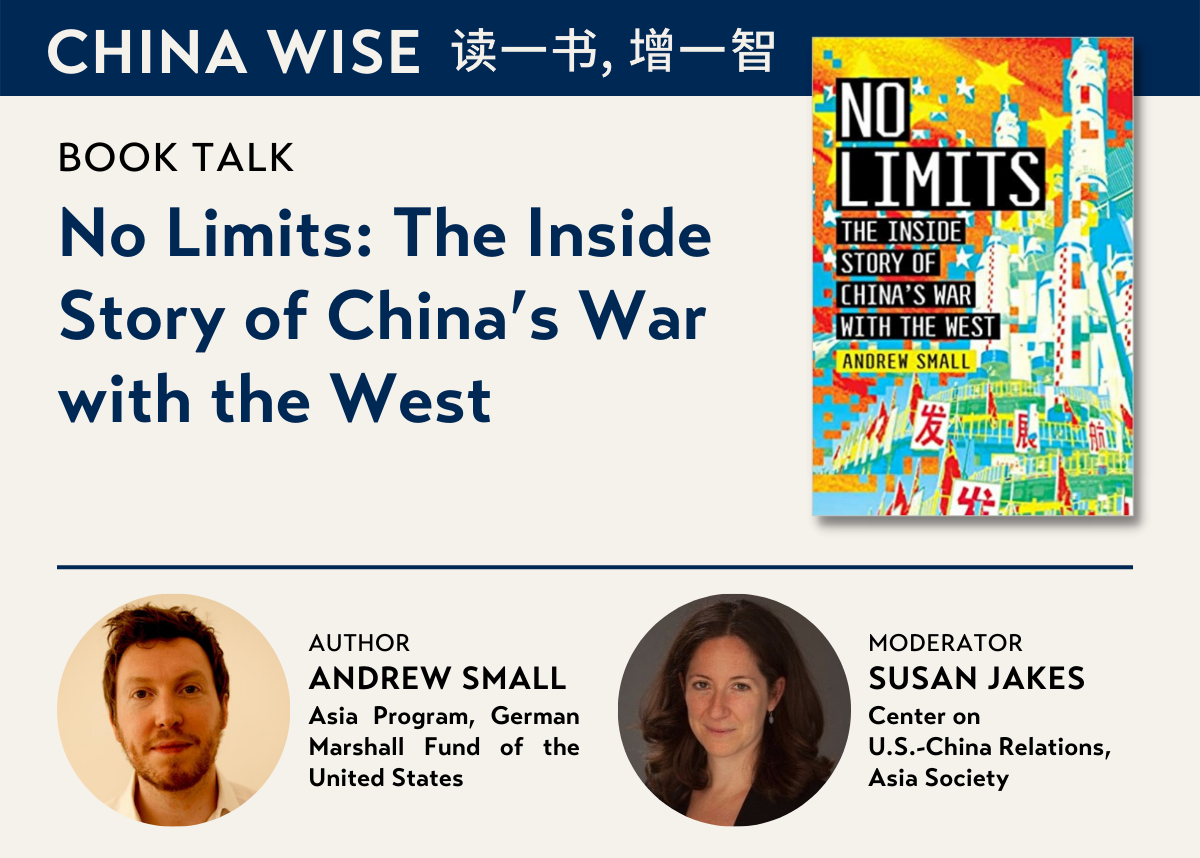 Xi Jinping is emerging from the 20th Party Congress stronger than ever in China and more focused than ever on pressing China’s interests despite pushback from the U.S. and its allies. Technology has become a key point of contention in the U.S.-China relationship, serving as the connective tissue between economic, military, and political competition. How has the U.S. managed China’s quest for technological superiority and self-sufficiency to date? And what does that story tell us about how the U.S. and China will clash in the future?

Please join us in person on November 21 to hear from Andrew Small on his new book, No Limits: The Inside Story of China’s War with the West, in conversation with Susan Jakes, Editor of ChinaFile at Asia Society’s Center on U.S.-China Relations. This conversation will be the latest event in the China Wise book series, co-organized by the Asia Society Center on U.S.-China Relations, the Asia Society Policy Institute, and its Center for China Analysis. Books will be available for sale at the event.

Andrew Small is a senior transatlantic fellow with the Asia program at the German Marshall Fund of the United States. He has worked on foreign and economic policy issues in Beijing, Brussels, Berlin, London, and Washington D.C. His research focuses on U.S.-China relations, Europe-China relations, and broader developments in Chinese foreign and economic policy. He previously worked as the director of the Foreign Policy Centre's Beijing office; as a fellow at the European Council on Foreign Relations, Chinese Academy of Social Sciences, and Australia National University's National Security College; and was an ESU scholar in the office of Senator Edward M. Kennedy. His articles and papers have been published in Foreign Affairs, the New York Times, Foreign Policy, and the Washington Quarterly, as well as many other journals, magazines, and newspapers.

Susan Jakes (moderator) is Editor of ChinaFile at Asia Society’s Center on U.S.-China Relations. From 2000-2007, she reported on China for Time magazine, first as a reporter and editor based in Hong Kong and then as the magazine’s Beijing Correspondent. She covered a wide range of topics for Time’s international and domestic editions, including student nationalism, human rights, the environment, public health, education, architecture, kung fu, North Korea’s nuclear weapons, and the making of Bhutan’s first feature film. Jakes was awarded the Society of Publishers in Asia’s Young Journalist of the Year Award for her coverage of Chinese youth culture. In 2003, she broke the story of the Chinese government’s cover-up of the SARS epidemic in Beijing, for which she received a Henry Luce Public Service Award. Her writing has appeared in The Atlantic, Foreign Policy, and The Los Angeles Review of Books, among other publications.