The COVID New (Ab)Normal: Post-COVID-19 ASEAN and the Centrality of Human Rights 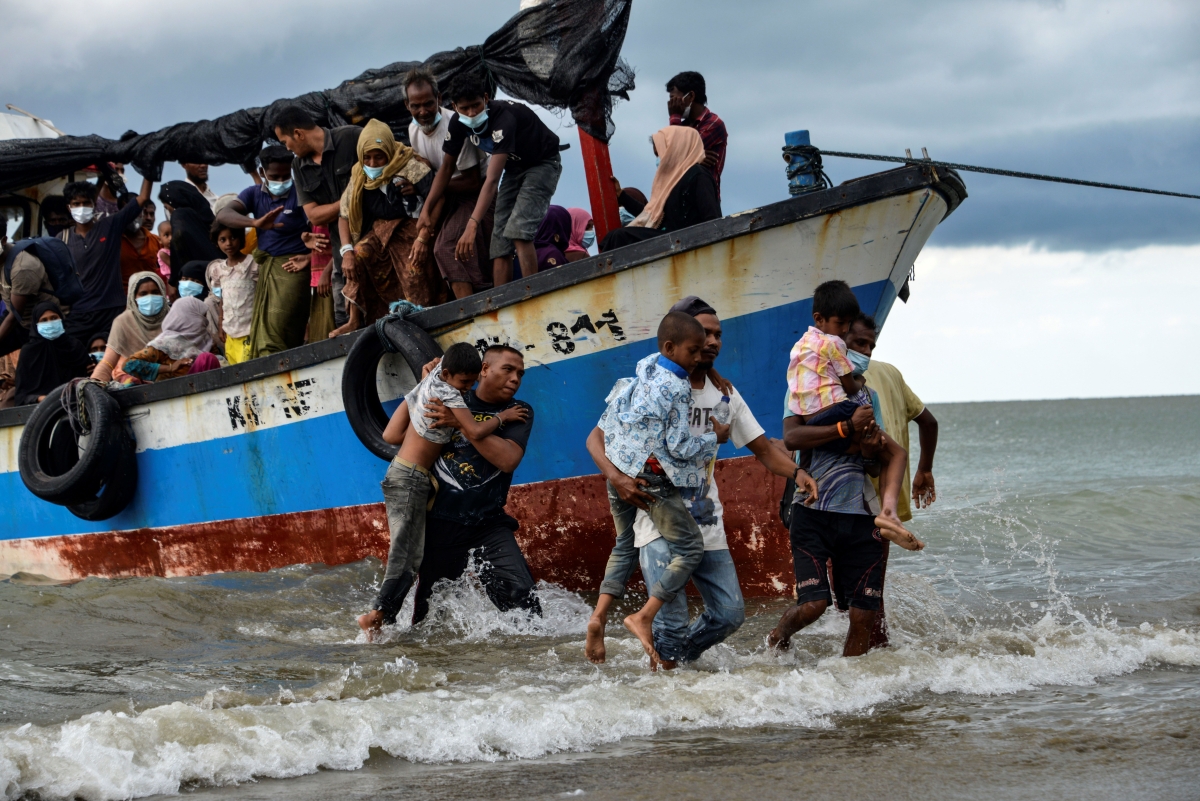 Acehnesse fishermen help evacuate Rohingya children from Myanmar onto the shorelines of Lancok village, in Indonesia's North Aceh Regency on June 25, 2020. - Nearly 100 Rohingya from Myanmar, including 30 children, have been rescued from a rickety wooden boat off the coast of Indonesia's Sumatra island, a maritime official said. (Chaideer Mahyuddin / AFP / Getty Images)

The latest ASEAN Summit, the 36th of its kind, was organised under the theme of a "cohesive and responsive ASEAN."

In a 27-page statement published at the end of the event — which was conducted online due to the coronavirus pandemic — this year's chair, Vietnam, said that the leaders of the 10-member bloc had made commitments to upholding  "ASEAN unity, solidarity and centrality."

On the eve of the Summit, fishermen off the coast of Aceh, on the Indonesian island of Sumatra, rescued about 100 stranded Rohingya refugees. They were compelled to intervene after officials had said they were planning to push the refugees' boat back out to sea. Here was a prime example of ASEAN's citizens displaying unity and solidarity, while its leaders' claims of such ran hollow.

It is not only the Indonesian government that has consistently let down the Rohingya in ASEAN. Myanmar in particular, as well as Thailand and Malaysia have also directly contributed to the Rohingya's suffering through various inhumane actions in recent years, and the situation has grown worse during the COVID-19 pandemic. Not only have governments pushed back Rohingya boats under the guise of protecting their citizens against the spread of the coronavirus, but Malaysia in particular has witnessed a surge in hateful rhetoric against them.

All other ASEAN member states deserve their fair share of scrutiny for failing to speak up, or act, on behalf of the Rohingya, and other groups in vulnerable situations. With Myanmar still unwilling to take meaningful steps to address the root causes of this crisis, the issue has become a regional shame.

It is not only the Rohingya, of course. For many people who call this region home, ASEAN is increasingly coming to be viewed as a rich man's club. One that pursues lucrative business opportunities at the expense of the human rights and fundamental freedoms of its people.

The coronavirus pandemic has further strengthened this viewpoint. Although case numbers in Southeast Asia have remained relatively low compared to other parts of the world, the virus has exposed major flaws and inequalities in our region's governance. Measures introduced by governments to combat the virus have ignored the concerns of those in already vulnerable situations, including informal and migrant workers.

For those relying on a daily wage for their work, self-isolation was not an option, the Malaysian government particularly has used the crisis as an excuse to crack down on migrants and refugees and detain them. In addition, lockdowns may have triggered higher numbers of incidents of domestic violence due to increased stress and difficult living conditions.

Not only have authorities failed to protect those in the most vulnerable situations, but ASEAN has remained silent as some leaders use the pandemic to strengthen their hold on power and silence dissenting voices.

Cambodia, under the increasingly despotic rule of Prime Minister Hun Sen, has been one of the region's worst performers. In April, his government enacted a state of emergency law under the guise of dealing with COVID-19 that grants authorities overly-broad powers to restrict freedom of expression, peaceful assembly, and association. Hun Sen has also used the virus as an excuse to arrest dozens of critics, including members of the now-dissolved opposition, the Cambodia National Rescue Party (CNRP).

Things aren't looking much better in the Philippines, where President Rodrigo Duterte — another leader hardly renowned for his commitment to democratic values — has adopted a state of emergency, granted the state security apparatus permission to behave as they wish, cracked down on critical media, and enacted further repressive legislation.

Meanwhile, Thailand keeps extending its emergency decree, despite coronavirus cases being at a negligible level, but as student-led anti-government protests grow.

In my own country, Malaysia, a back-door government that came to power in March has tried to limit parliamentary oversight on its activities by only holding a parliamentary sitting in May, months after the outbreak began.

With ASEAN's leaders being directly responsible for the dismal state of human rights in the region, clearly their claims of regional unity and solidarity do not ring true.

The challenges and inequalities the pandemic has highlighted however also presents an opportunity for our region's leaders to reflect on past mistakes and, ultimately, change course toward an ASEAN that is people-centred.

An effective starting point would be to improve regional cooperation and assistance, to ensure that everyone in the region has access to basic services and social protection measures. This includes those working in the informal sector and migrant workers, who have been heavily affected by the current situation. Strong social protections across the region will help mitigate the impact of the economic crisis, and help our region recover faster.

ASEAN must also focus on greater environmental sustainability. Economic recovery plans for post-COVID-19 must move our economies away from a reliance on fossil fuels and coal, and towards renewable energy projects that reduce contributions to climate change.

Shifting toward a greener economy, that boosts decent employment, offers social protection to all, and creates sustainable food supplies, will not only help the region absorb the immediate impact of the recession quicker, but also help avoid, and be better prepared for, future similar shocks. Sustainable and fair economies will also enhance public safety and guarantee the long-term economic prosperity of the region.

The rise in xenophobic and hateful rhetoric in recent months has also been concerning and risks increasing in a time of economic hardship. ASEAN leaders must therefore play a crucial preventative role in ensuring unity and peace by speaking out against hate speech of all kinds.

Finally, the COVID-19 crisis has showcased what liberties authoritarians will take when presented with an opportunity to strengthen their hold on power. To safeguard against the rise of authoritarianism, we must  strengthen parliamentary oversight, especially when it comes to human rights, and find ways for citizens to better participate in democracies. The expected increased embrace of technology could create new opportunities for governments and parliamentarians to improve people's involvement in democracies.

Until now, our region's leaders have not put their people at the forefront of their priorities, but COVID-19 presents an opportunity to change course. Let's learn from the mistakes of the past, and ensure an ASEAN that is inclusive, sustainable, and that benefits everyone.