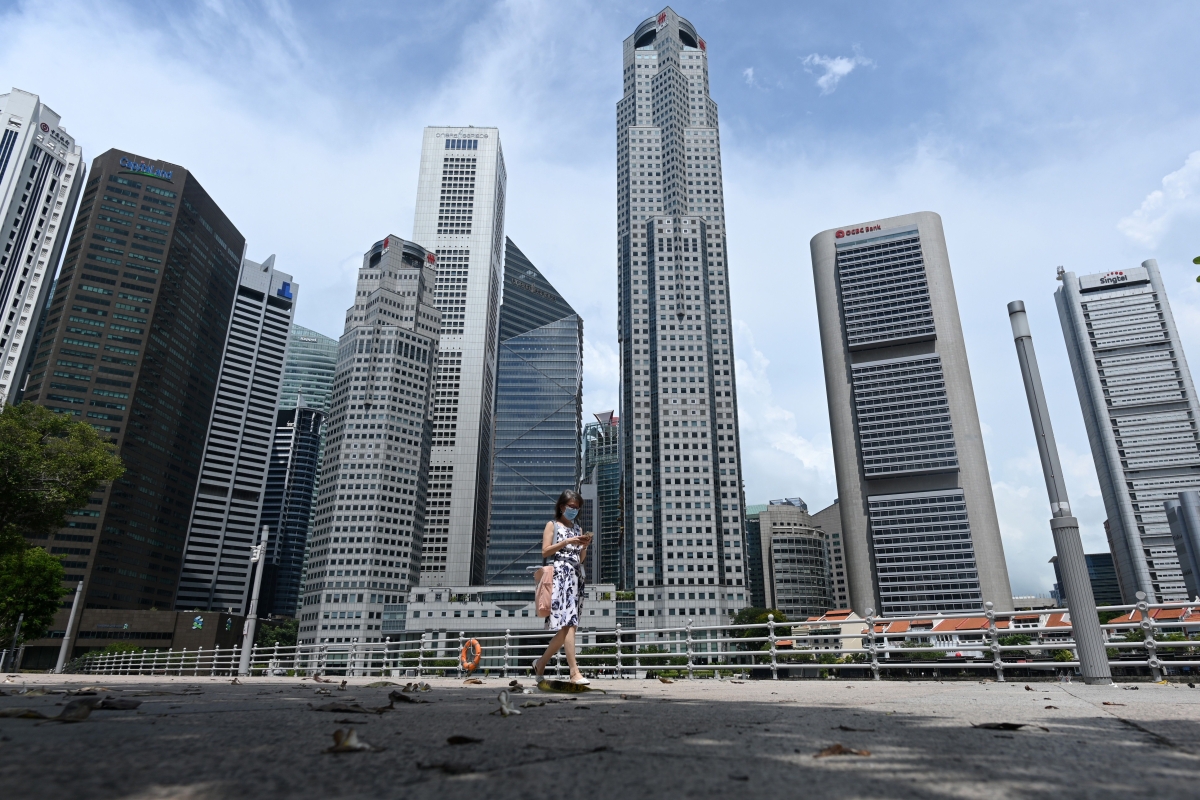 A woman walks past commercial buildings in the financial business district in Singapore on June 11, 2020, as the city-state eased its partial lockdown restrictions aimed at curbing the spread of the COVID-19 coronavirus. (Roslan Rahman / AFP / Getty Images)

In post-COVID urban living, adjustments will need to be made to work-life, transport, and welfare provision to build resilience and preparedness when the next novel contagious disease hits. Fiscally-constrained governments can replicate this city-focused approach with support from the private sector.

As states grappled with controlling the spread of COVID-19, lockdowns appeared to be the default mode of response. Lockdowns though have been politically controversial, and the World Health Organization has been conservative in recommending them, given their disproportionate impacts on economically disadvantaged populations. Singapore and China show, however, that effective lockdowns at the city-level can be successful if states can provide critical economic support to residents and workers. Key to their success was their city-focused approach and prioritization of resources.

Getting it Right: Lockdown with Economic Support

Cities are the key battleground in fighting the COVID-19 pandemic.  As densely populated centres of economic activity, millions of interactions among individuals occur within cities on a daily basis, leading to exponential growth in infections. Hence the critical action to address infections is through lockdowns or strict controls over movements of people within, into, or out of the city. When done right, lockdowns can arrest the growth in active cases in two months.

Most countries today already recognize the importance of closing borders to prevent spill-overs of infections into the country, or from one city to the rest of the country. However, what sets Singapore’s and China’s city-based lockdowns apart was their ability to also provide sufficient economic support allowing households access to basic needs such as food and medicine while movement control policies were in place and people were unable to work. This resulted in people actually staying indoors. In turn, their active COVID-19 cases peaked then declined with recoveries exceeding new infections (considering a 14-day average recovery period).

Replicating the successes of Singapore and China requires tapping into fiscal reserves to support cities, particularly with the suspension of manufacturing and services sectors (including travel and tourism) during COVID-19 lockdowns. These two sectors account for the majority of income-generating employment globally (services alone make-up half). Employees in these sectors requiring economic support have easily exceeded the pre-pandemic average unemployment rate of 4-6 percent of the world’s total labor force.

Governments with the means to tap into fiscal reserves, as China and Singapore did, should focus their resources on one city or one province/batch of cities at a time, while maintaining strict border controls that compartmentalize countries into cities. This allows for gradually minimizing the areas affected by the pandemic. Moreover, this should be done while managing city borders, to prevent the one city’s shortcomings in pandemic management to affect those connected to it by road, sea or air transport. Crucially, this should be followed by a gradual re-opening, to avoid further waves of infection.

Few countries have sufficient reserves to match the needed support during lockdowns. Prior to the pandemic, 69 countries were already at some risk of a debt crisis, according to the International Monetary Fund. Higher-income countries, having taken control of the pandemic, will be constrained in their ability to provide sufficient bilateral aid as they focus on their own economic recovery. Additionally, multilateral lending capacity is inadequate to cover wages in the sectors that provide the majority of jobs.

To enable effective lockdowns for approximately two months, governments can potentially engage the private sector. Expanding from the World Health Organization’s envisioned role of support in healthcare provision, we argue that the private sector can also be convinced to utilize their capital to temporarily cover the cost of paying salaries (not to mention avoiding lay-offs) over the period of locking down.

Given insufficient reserves to tap, national governments can coordinate these contributions by promising commensurate tax breaks to companies that pay wages amid lockdowns, to be given in future recovery periods after economies re-normalize. Such tax breaks can be capped at some fixed amount relative to the minimum basic wage needed to be economically secure, to prevent abuses. For instance, Singapore applied a fixed criterion and quantum for remuneration in selected industries: the first 75 percent of the first SGD 4,600 of monthly wages paid by companies. To reduce the incentive to over-state claims, tax breaks should be given after companies have reported wage payments.

This recommendation differs from the fiscal stimuli to counter recessions currently being recommended by international institutions such as the World Bank and the International Monetary Fund. In contrast, recommendations in this article aim at enabling effective lockdowns, solving the health problem first while allowing economies to restart sooner.

Why Should the Private Sector Get Involved?

Private companies will not likely want to dip into their capital. Instead, they will want to avoid further net losses, preserve returns to shareholders, maintain demand for corporate stocks, and prevent company devaluation in the stock market.

However, contributing to lockdowns benefits companies too. Companies are highly interconnected within national industry clusters or within cities. They depend on demand by consumers, who are wage-earners too. Thus, companies cannot normalize until the rest of their economies do. By contributing financially to a strict two-month lockdown, private companies stand to lose less than if the pandemic were to drag on further.

These have parallel implications on global economic recovery. Within a globalized economy, the competitiveness and growth potential of any country depends inextricably on the normalization of its partner countries. Even the economies of those that have managed to keep the disease under control, cannot fully normalize, until the last country’s economy does.

COVID-19 has struck at cities, which are at the heart of countries’ economic growth. Interactions, from close proximity of businesses to one another, also promote innovation. Moving forward, countries need to “pandemic-proof” their cities, to ensure that future infectious diseases are not as devastating to their health and economies.

First, countries should hasten the pace of digital integration among their companies. This entails upgrading work processes as well as digital infrastructure so that their employees can continue value-adding while working from home. Digital financial inclusion should also be promoted. Ensuring each citizen has an online account and is able to make online payments minimizes the pandemic’s impacts on consumer spending, while providing a direct mechanism for government transfers.

Next, governments will need to identify innovative ways of transforming the public transport sector to allow for social distancing. Public transport involves having large numbers of passengers packed into a confined space.  To ensure safety in times of pandemics, governments should leverage novel technologies/designs and safety protocols to allow social distancing across all modes of public transport, while exploring alternative modes of transport, such as opening bike lanes.

Finally, governments should ensure they are able to provide sufficient economic support to citizens by developing healthier fiscal balances with sufficient reserves.  They also need expanded and more inclusive social welfare systems which are critical not just for citizens but for the country as a whole.  Avoiding exclusion allows for a shared, whole-of-society approach towards effective urban disease mitigation. It also helps prevent protracted bouts with future novel contagious diseases, averting the situation we have today.