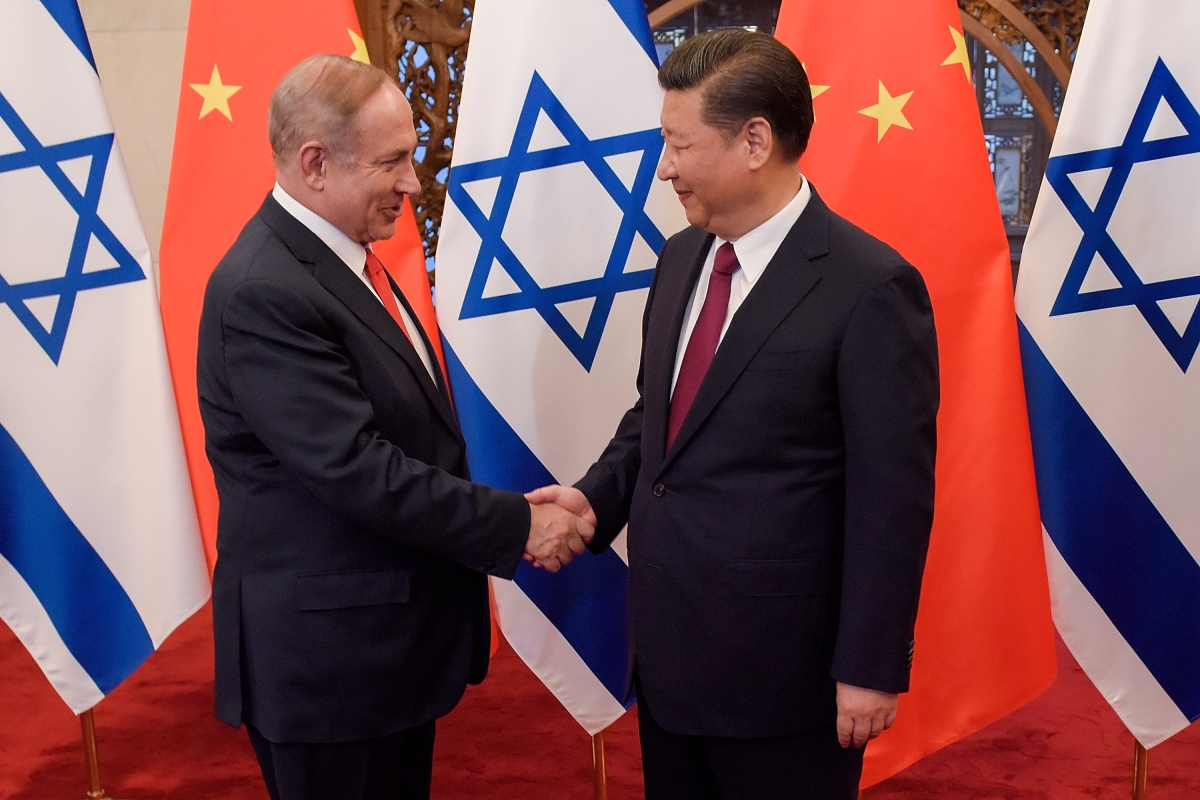 If indeed the relationship between the United States and China in the years to come will be defined as a new era of great power competition, it creates a range of hard choices for U.S. partners. In the Middle East, the United States has no closer partner than Israel, and it will not be spared these dilemmas.

Even before the onset of COVID-19 and the disputes about its origins and China’s management of the early stages of the outbreak, the U.S.-China rivalry, in its ideological, economic, technological, and in time, security dimensions, was taking on a global scale. China’s expanding economic relationships, reinforced through the Belt and Road Initiative (BRI) and frequently in regions where U.S. activity is declining, give it significant influence in non-economic matters as well. The tendency of many countries to defer to Chinese leadership in international organizations like the World Health Organization, or even to go so far as to support a resolution at the U.N. Human Rights Council endorsing China’s oppression of Uighur Muslims in Xinjiang province, are evidence of China’s ability to gain support for its autocratic model in the global competition of ideas with democratic nations, particularly when the United States chooses not to engage. Influence and presence, at first economic, but expanding to other domains, can gradually give China footholds to challenge U.S. security partnerships in numerous regions and countries.

Likewise, China’s rise as a technology rival of the United States — through its own capabilities, the appropriation of others’ intellectual property, and proactive investment in other nations’ technology sectors — creates the potential for a bifurcated global technology competition. The United States and its partners, and China and its partners, will each seek to dominate emerging technology realms, including the building and control of networks and the establishment of rules and norms under which they operate. While no full decoupling of the interdependent U.S. and Chinese economies is remotely feasible for either nation, other countries may increasingly find themselves forced to make stark choices about which power they align with, as has already occurred in the case of Huawei’s 5G capabilities.

Israel, with its strong high-tech and innovation capabilities and close partnership with the United States, is positioned between these two giants, and must calculate its options carefully. Following the establishment of diplomatic relations with the People’s Republic of China in 1992, Israel built significant channels toward China in multiple dimensions, including exploring cooperation in military technology. But in the early 2000s, following two major crises over the proposed sale of advanced Israeli drone and radar technologies, Israel was forced by bipartisan U.S. pressure to halt any sale of military and dual-use equipment and to stop all military cooperation with China. These episodes led to several years of decline in bilateral relations between Israel and China. Yet in the last decade, while Israel has adhered to these restrictions, Israel-China trade has flourished, reaching $13billion in 2019 and making China Israel’s second-largest bilateral trading partner. Chinese companies annually invest hundreds of millions of dollars in Israeli hi-tech companies, and have won contracts to implement major infrastructure construction projects in the country, from ports to tunnels to rail lines. Israel, for its part, declared its support of the BRI and became a partner in the initiative.

Now, as the tensions between the two superpowers are rising to new levels, the United States is urging Israel to choose sides and place significant limits on economic and technological cooperation with China, to avoid giving China access to sensitive dual-use capabilities or a regional presence that compromises U.S. security interests. In one of the most prominent recent examples, in 2019, under U.S. pressure, Israel established a government committee to review the national security implications of foreign investments, with a clear focus on China. The committee and its mandate are still a work in progress, but U.S. patience, particularly as tensions have flared around the outbreak and spread of COVID-19, is limited. Following Secretary Pompeo’s lightning visit to Israel in May of this year, Israel got a clear message that it should not contract with a Chinese-backed company to build a major desalination plant.

Are Israel's options open? Is it possible for Israel to sustain its special relationship with the United States and maintain productive relations with China? Must it choose to be exclusively in the American camp and forego opportunities with China? Or possibly, over the long term, would Israel ever consider changing its course and shifting its policy approach toward the new superpower from East Asia?

China is well aware of Israel’s deep, strategic ties to the United States and has no illusions that they will change. In parallel, the Chinese people have maintained through many years a positive attitude toward the Jewish people, and within the Communist Party and the Chinese public, Israel's image has strengthened as a powerful, creative country with unique technological and scientific innovation capabilities. In the Chinese view, Israel is not at the center of the great power competition, and the fact that it is a firm ally of the United States should not prevent the cultivation of commercial ties along civilian lines. China itself maintains parallel relationships with Middle Eastern countries that are enemies, such as Iran, Saudi Arabia, and Israel, distinguishing between political positions and rhetoric on the one hand, and economic and business activity on the other.

In the last seven years, led by President Xi Jinping and Prime Minister Benjamin Netanyahu, the two countries have succeeded to rebuild friendly relations. Mutual understanding of their strategic restrictions exists, but it requires constant management of expectations. While China acknowledges Israel’s close and dependent relations with the United States, it will nevertheless press Israel to expand the limits of their bilateral cooperation, leading Israel, when necessary, to disappoint its Chinese trading partner and even some of its own industries, at the cost of losing significant, even lucrative opportunities. Israel, meanwhile, understands how China relies on Arab and Muslim support in international organizations, particularly against Taiwan’s ambitions to upgrade its status. It is clear, therefore, that China will not change its position and support Israel against anti-Israel resolutions brought by those same countries, as the United States has done for many years. Israel also must grapple with the reality that China, while professing no ill will toward Israel, continues to sell advanced weapons to Israel’s neighbors. The United States, in contrast, is in the early years of a 10-year commitment to provide $38 billion of military assistance to Israel, and is committed by law and policy to ensure Israel’s qualitative military edge over its neighbors. These factors alone all but guarantee that Israel will not make any political shift in the foreseeable future that would see it lean toward China in this new great power competition.

At the same time, as Israel seeks to recover from its own COVID-19 economic earthquake, it will surely seek to maintain a certain level of civilian economic cooperation with China in non-sensitive areas, such as agriculture, education, and medicine, while blocking Chinese companies from reaching its advanced, sensitive technology. The Israeli government must be more involved in this delicate process, including by expanding the mandate and authorities, and adopting regular and transparent work methods, with respect to the new committee established to examine and approve foreign investments.

One important sector in this regard is the telecommunications field, particularly as it relates to 5G. The small, yet advanced, Israeli telecommunications infrastructure does not use Chinese components, and there is no indication that Israel’s future 5G infrastructure will include Chinese technology. This quiet, undeclared decision by Israel authorities was made in keeping with the Israeli concept of building an independent telecommunications infrastructure that does not rely on any other foreign country. Israel might apply the same approach to other strategic infrastructure facilities: if necessary, and if the construction process itself is not sensitive, Chinese companies might be eligible to take part in early stages of such projects, but Israel must retain full control of the operations of such facilities. But even in such cases, transparency and dialogue with the United States will be essential. Developing a standing, structured mechanism to facilitate such dialogue between Israel the United States, as has been used to deal with numerous strategic and security issues in the past, would be a worthwhile goal.

In the years to come, Israel will continue to remain closely aligned with the United States, preserving its special, strategic relationship. But maintaining productive lines of communication with China is also an Israeli interest. In close consultation with the United States, Israel should define clear limits and explore areas of flexibility. The United States, for its part, may need to take into account Israel’s interest in abstaining from rhetoric and actions that are liable to harm the delicate web of ties with China it has formed in recent years. As China becomes stronger and more involved in the international arena, the United States will maintain its own channels to the Chinese leadership to deliver messages relating to its concerns and interests. It should be understanding as Israel does the same.

Ambassador Dr. Eyal Propper is a Senior Research Fellow and Head of China Research at the Institute for National Security Studies (INSS) in Tel Aviv. He joined the INSS after a long career in the Israeli Foreign Service, where he specialized primarily in China and Arms Control. Most recently, he served as the Consul General of Israel in Shanghai.

Ambassador Daniel B. Shapiro is a Distinguished Visiting Fellow at the Institute for National Security Studies (INSS) in Tel Aviv. He served as U.S. Ambassador to Israel and Senior Director for the Middle East and North Africa at the National Security Council during the Obama Administration.