The Convenient Rewriting of the History of the 'Quad' 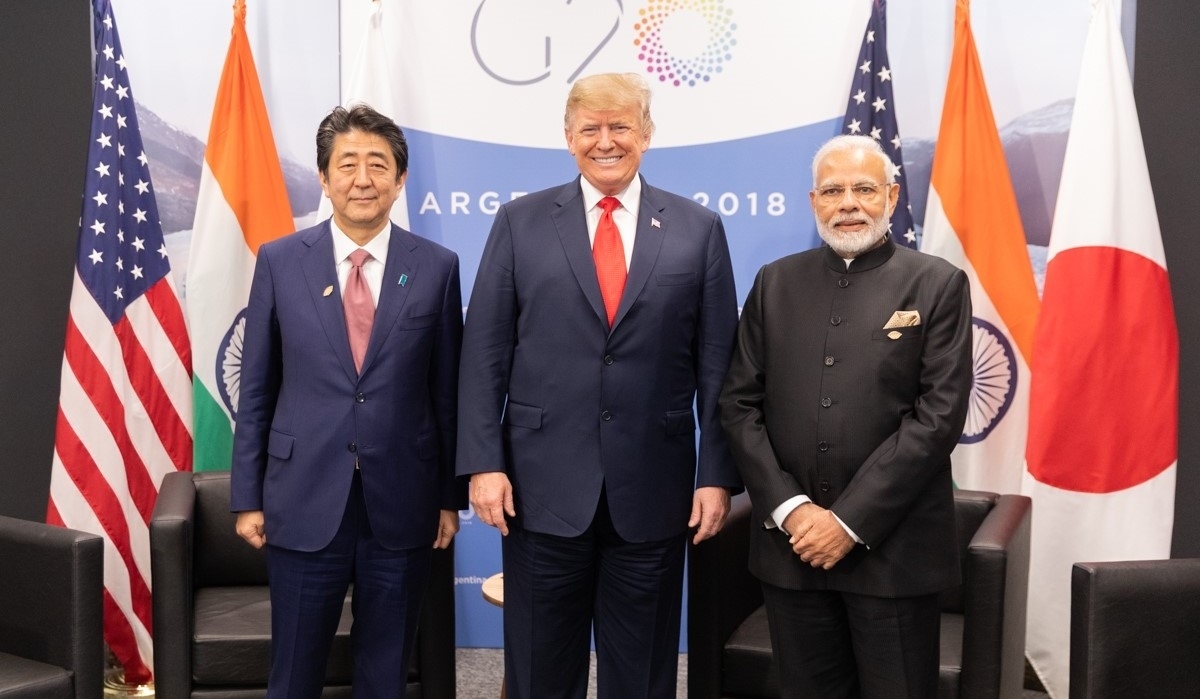 The rise of China and its changing military behavior in the East and South China Seas have prompted many debates among America's friends and allies across the Asia-Pacific region about how to respond.

The so-called "Quad," comprising the region's major democracies of Japan, India, Australia and the U.S., has figured prominently in these discussions as a classic geostrategic tool of "offshore balancing" against Beijing.

Over the last decade, the idea of the Quad has undergone a number of mutations. And once again, in the midst of a further hardening of geostrategic circumstances in the region, it has been attracting the renewed attention of policy makers in Washington, Tokyo, Delhi, and Canberra. The history of the concept, however, is important, if we are to have a properly informed view of its future.

When then Japanese Prime Minister Shinzo Abe first proposed the Quad in 2007, he called for a "quadrilateral strategic dialogue" or QSD linking Japan, India, Australia and the U.S. Back then, as now, there was considerable political ambiguity around what this "linking" would actually mean: was this a regular exchange of views on the strategic shape of the region among officials? A defense and/or foreign ministerial forum to do the same? A mechanism between these countries' militaries to go considerably deeper than that by planning countermeasures against China? Joint naval exercises against China-related contingencies? Or ultimately some form of a mutual defense pact? Or as is more likely, a strategy of graduation from one level of strategic cooperation to the next over time? As Australian prime minister at the time, I was directly involved in this important debate. And one of the core questions in capitals back in 2007-2008 was where in fact did Abe intend to take the Quad over time?

This led us to a second question: the unstated strategic target of the original Japanese proposal -- namely China. Japan was publicly coy about this. But the Japanese Foreign Ministry was considerably less so when it published maps showing an "arc of freedom and prosperity," pointedly including the four Quad members and excluding one very large country just to the west of Japan called China. Japan said that the rationale for the QSD was to defend the international rules-based order, implying that China back in 2007 had already become a threat to the order. As most analysts would agree, there is a considerable difference between Hu Jintao's China of 2007 and Xi Jinping's China of 2019. To argue in 2007 that the wisest strategic approach to the China of the time was to begin forming an alliance against it was at a minimum debatable. Indeed, it was just as arguable that such an action would have further strengthened the hand of hard-liners in Beijing to "double-down" in its strategic posture in Asia.

A third factor concerning the Quad was the actual attitude of the other would-be participants. By the time my government was sworn into office in late 2007, Abe had been replaced by Yasuo Fukuda, whose enthusiasm for the Quad was negligible. Indeed, Fukuda began a period of rapprochement with Beijing which reflected his consistently more benign attitude to China. Our diplomats in Tokyo at the time confirmed this shift in Japan's official position following Abe's loss of the LDP leadership. Very simply, the Quad was no longer a Japanese priority. This became even clearer when the Democratic Party of Japan government took office in 2009; for it any talk of a Quad was political anathema. The idea, therefore, that Japan had been a consistent advocate of the Quad since Abe first advanced the idea in mid-2007 is nothing short of historical revisionism.

The same reality emerged in early 2008 in Delhi. Once again, the Australian government checked with Prime Minister Manmohan Singh on his position on the Quad. What we found was at best limited enthusiasm. Indeed on the eve of Singh's first state visit to China in January 2008 (i.e. prior to any announcement of the Australian government's policy on the Quad), Singh stated that he would not be party to any initiative aimed at containing China, that the India-China relationship was for him a matter of the first "priority," explicitly noting that the Quad "had never got going." This was not an entirely ringing endorsement for the Quad at a time when Australia was reviewing its own position.

That brings us to the United States. As Prime Minister I visited Washington in March 2008 just after we had made clear that we would not be continuing Australian participation with the Quad. In a full day of meetings with President George W. Bush and the most senior members of his cabinet, not once was the Quad raised by the American side.

Then there was the not insignificant question of Australian national interests. Our concerns were straightforward: would it be wise to consign the future of our own bilateral relationship with China to the future health of the China-Japan relationship over which we could exercise no influence or control whatsoever? The uncomfortable truth was that centuries of mutual toxicity colored deeply the lens through which Beijing and Tokyo viewed each other. For Australia in 2007 therefore, to begin embroiling itself in any emerging military alliance with Japan against China, in the absence of any formal reconciliation between Tokyo and Beijing over the events of the Second World War, was incompatible with our long-term national interests.

There was also China's historical relationship with India. While not as toxic as Sino-Japanese relations, the two countries had fought a violent border war in 1962 and continue to contest one of the largest disputed borders in the world, which still periodically erupts into violent clashes between the two militaries. Once again, back in 2007, did Australia necessarily want to make our future relationship with Beijing conditional on the future state of the relationship between Beijing and Delhi involving factors well beyond Australia's national control or influence?

These are the uncomfortable, inconvenient and untidy facts concerning the history of "Quad Mark 1." But a number of right-wing Quad zealots have instead insisted that the reason the Quad didn't proceed was purely because of my opposition to it. This was allegedly because I was a Chinese speaker and I was therefore keen to appease Beijing.

Unfortunately, this particular line of argument also falls foul of other inconvenient truths. During my first visit to Beijing as prime minister, I used an address in Chinese at Peking University to attack Chinese human rights abuses in Tibet. I refused to yield to Chinese pressure not to grant visas to visiting Uighur activists traveling to Australia. I refused a Chinese investment application for its state-owned enterprises to take over major Australian mining companies. We were also the first non-American government in the world to deny Huawei's ability to sell its products -- into the Australian National Broadband Network -- on national security grounds. And our 2009 Defence White Paper explicitly named China's expanding military budget and its unexplained regional deployments as a reason for Australia doubling its submarine fleet and increasing its surface fleet by one third. Indeed, when our officials visited Tokyo at the time to brief the Japanese government on the forthcoming release of our White paper, Japanese officials were horrified that we intended to be that blunt in identifying the emerging China challenge.

Ten years on from the political and military realities that prevailed in 2007-2008, the strategic circumstances of our wider region have changed profoundly. But what now for the Quad? Since Abe's return to the prime ministership, there has been a renewed Japanese embrace of the QSD. There is also some embrace, but by no means with the same level of enthusiasm we find in Tokyo, from Delhi.

The current conservative government of Australia, which joined efforts to revive the Quad in 2017, shares Japan's renewed commitment to the Quad, although India has been reluctant to expand trilateral naval exercises with Japan and the U.S. to include Australia, much to Canberra's chagrin. The U.S. Administration's decision to formally announce the end of strategic engagement with China and to replace it with a new, and as yet ill-defined, doctrine of strategic competition has also seen the U.S. more fully embrace the strategic logic of the Quad. Nonetheless, the QSD in 2019 still suffers some of the same handicaps it did back in 2008 -- including the lack of a galvanizing strategic vision that articulates its substantive, practical purpose beyond classical counterbalancing against Beijing, its operational characteristics, as well as an agreed assessment of its likely effectiveness in deterring, or exacerbating, particular forms of Chinese geopolitical behavior.

Then there is the level of continuing equivocation in many capitals on where the Quad could or should be taken next. Indian Prime Minister Narendra Modi's bilateral summit with Chinese president Xi Jinping in April 2018 reflects a degree of deliberate Indian hedging in India's relationships with both the U.S. and China, reinforced by Delhi's doubts as to how reliable a long-term strategic partner Washington may prove to be under the Trump Administration and whatever replaces it. Should Modi not survive the upcoming Indian elections, it's an even more open question as to whether a different Bharatiya Janata Party leader, let alone a coalition government led by the Congress Party, would sustain unqualified political support for the Quad.

Meanwhile in Tokyo, despite Abe's secure political position and the left's continuing disarray, there are also some signs of Tokyo's hedging on the U.S.-China-Japan strategic triangle as reflected in Abe's historic visit to Beijing in October 2018, which signaled the formal end of a seven-year freeze in the relationship. It's important, of course, not to read too much into these summits given the depth of the strategic animosities which continue to exist. One summit doth not a summer make. But we would be willfully blind not to recognize that more nuanced positions on Beijing are beginning to emerge in both Delhi and Tokyo, reinforced of course by China's own desire to de-escalate historic strategic tensions with India and Japan to help offset Beijing's worsening relationship with Washington.

Center-right governments have been in office in all four countries of the Quad for some years now. It's puzzling therefore that a clearer common position on the future of the Quad has yet to emerge. But for right-wing commentators in various "Quad capitals" to attribute responsibility for this continuing ambiguity to the decision of my government back in 2008 is a nonsense. If we are going to have a clear and forthright debate on the Quad's future in the political forums of our four robust democracies, we should at least be honest enough to provide our peoples with an accurate rendition of its past.