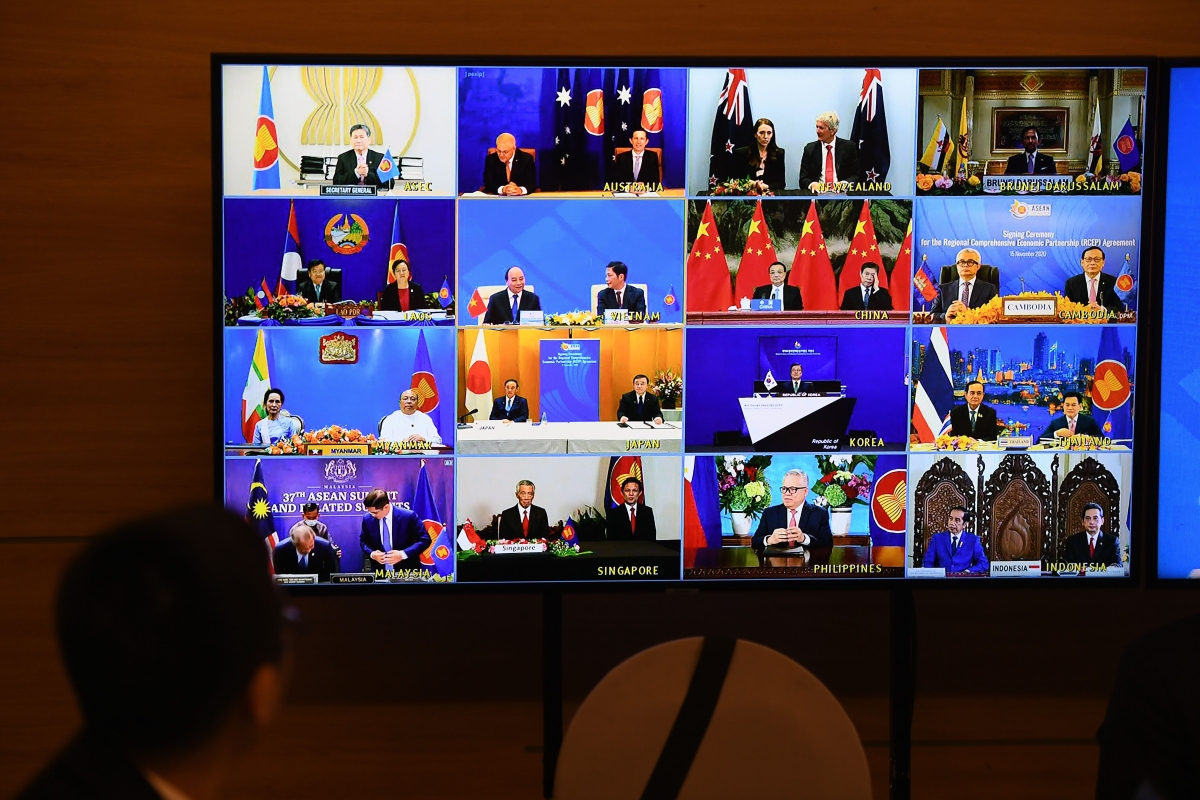 Representatives of signatory countries are pictured on-screen during the signing ceremony for the Regional Comprehensive Economic Partnership (RCEP) trade pact at the ASEAN summit that is being held online in Hanoi on November 15, 2020. (Nhac Nguyen/AFP/Getty Images)

As all eyes were on the United States presidential election in recent weeks, Beijing was aiming its trade arrows at Canberra. Australian timber, coal, wine, and beef exporters were being threatened with new Chinese barriers erected to prevent the sale of their goods.

The reason? To hit back at the Australian government’s statements on Chinese government actions in Xinjiang and Hong Kong, the banning of Huawei from Australia’s 5G network, Canberra’s call for an investigation into the origins of the coronavirus, as well as accusations about Chinese Communist Party interference in Australian politics.

As has become par for the course, Beijing did not actually acknowledge that any trade slowdown was happening at all. But as Chinese officials deflected any direct connection to restricted Australian imports, Foreign Ministry spokesman Zhao Lijian last Thursday listed political “mistakes” that Canberra has committed which are “the root cause of China-Australia relations taking a sharp downturn”.

These were part of a hefty list of 14 grievances given by Chinese diplomats to officials in Canberra earlier last week.

Ironically, these punitive actions were transpiring as President Xi Jinping told the assembled crowd at the annual China import expo in Shanghai of the country’s “sincere desire to share its market opportunities with the world and contribute to the global economic recovery”.

Beijing, he added, was committed to “mutual opening” and support for the multilateral, rules-based trading system.

This is not the first time Beijing has used the threat and imposition of trade restrictive measures to respond to what it perceived as foreign policy positions or actions of another country.

From Norwegian Salmon to Philippine Bananas

The first of these high-profile incidents occurred in 2010, when Norwegian salmon paid the price for the Nobel Committee’s decision to give the Peace Prize to Chinese dissident Liu Xiaobo, and was followed by other incidents, including: In 2010, Chinese Customs officials halted exports of rare earths to Japan over a territorial dispute; in 2012, Philippine banana exporters found their produce rotting on the docks instead of finding their way to China, the result of a different set of disputes with the Chinese over territorial claims.

More recently, punitive measures were taken by the Chinese against South Korean companies, products and tourism when Seoul deployed a U.S. anti-missile system.

And last year, Canadian canola exporters found their access to the Chinese market shut off, likely caught in a larger dispute over the U.S. extradition request regarding Huawei’s chief financial officer Meng Wanzhou.

All of these episodes, unfortunately, follow a similar pattern. Chinese leaders make a determination that the statements or policies of a certain country undermine some aspect of the party’s rule or security interests.

The Chinese trade bureaucracy then looks for ways to “punish” the offending country by imposing opaque trade or investment restrictions without official notifications.

This, in turn, provides enough plausible deniability to suggest that the measures are not being orchestrated by the central government even as Foreign Ministry spokesman and state-run nationalist tabloids such as the Global Times keep up a steady drumbeat of complaints about the wrong done to “China” by the offending country.

As Assistant Minister of Commerce Li Chenggang told the press regarding the recent flap with Australia: Canberra “knows what it needs to do to improve this relationship”.

Against the Rules-Based System

This use of non-transparent restrictions to punish other countries for their policies goes against the letter and spirit of the rules-based trading system, and calls into question the value of concluding free trade agreements with Beijing, as Canberra and Seoul have done.

It is particularly difficult to reconcile these recent punitive actions against Australian imports with the signing earlier this month of a 15-nation trade pact known as the Regional Comprehensive Economic Partnership – with both China and Australia key members of the agreement.

China has been all too quick to criticize the U.S. for its unilateral actions and other measures that are inconsistent with World Trade Organisation (WTO) rules over the past four years, while trying to herald itself as the champion of the rules-based multilateral trading system.

But pointing to objectionable practices by Washington does not excuse Beijing’s own behavior here. China has repeatedly taken trade restrictive measures, without acknowledging them
or justifying them under the WTO rules.

These measures raise serious questions regarding China’s adherence to the WTO rules on non-discrimination, transparency, appropriate use of trade remedy laws, and “ensuring regulations shall not be more trade-restrictive than necessary to fulfill a legitimate objective” – which includes “national security requirements, the protection of human health or safety, animal or plant life or health, or the environment”.

The time is ripe for the U.S., Australia, and other trading partners to join forces at regional gatherings, and the WTO to make it clear to Beijing that trade restrictive measures, whether formal or informal, publicly declared or not, are unacceptable and raise serious concerns with regards to China’s adherence to its WTO obligations.

Upcoming meetings of the WTO’s general council and the run-up to the formal WTO trade policy review of China in July next year could provide important venues to collectively call Beijing out on its infractions.

At a minimum, rules on transparency require clear explanations based on science or fact when China curtails imports. If such measures continue to be swept under the rug or excused as the cost of doing business with China, it only sends a green light to Chinese leaders that such behavior is cost-free.

If China is as committed to the rules-based system as its leaders contend, Beijing will have no choice but to act in line with the letter and spirit of its international obligations by having its deeds match its rhetoric.

Read the article in The Straits Times.