Christopher K. Johnson is Senior Fellow on Chinese Politics at the Asia Society Policy Institute's Center for China Analysis. He is also the President and CEO of China Strategies Group, a political risk consulting firm. As one of the top China experts in the field, his insights frequently are sought out by the world’s leading corporate, financial, and other business interests to help develop strategies for clients pursuing opportunities in China and regionally.  Chris is based in New York, but spends nearly half his time in China and the rest of Asia. Chris also serves as a senior fellow in the office of the president at the Center for Strategic and International Studies (CSIS). His views and analysis on China frequently are featured in the world’s leading business, policy and media outlets. An accomplished Asian affairs specialist, Chris spent nearly two decades serving in the United States Government’s intelligence and foreign affairs communities. Chris worked as a senior China analyst at the Central Intelligence Agency, where he chronicled China’s dynamic political and economic transformation, the development of its robust military modernization program, and Beijing’s resurgence as a regional and global power. 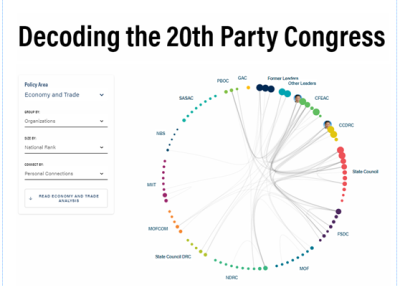 The 20th Party Congress of the Chinese Communist Party (CCP) will determine China’s leadership for the next five years, and be a defining moment for politics, policy, and the world.