A Q&A with Kevin Rudd in the Asahi Shimbun 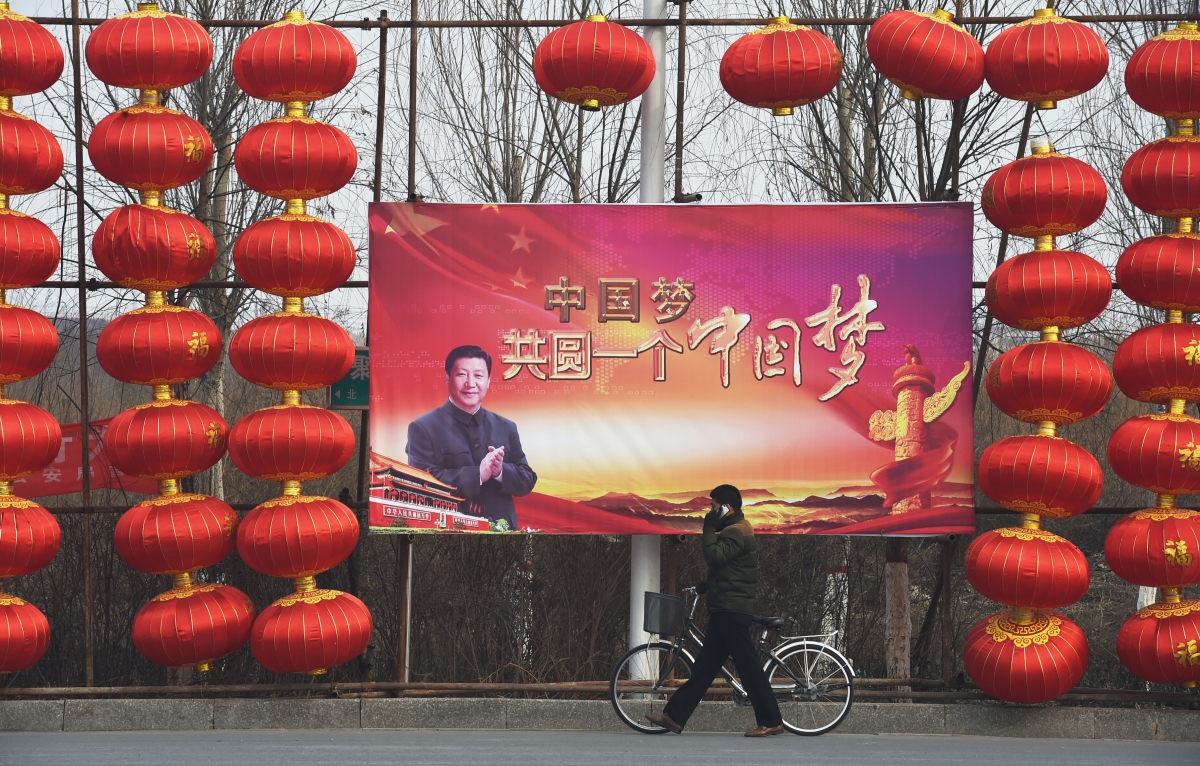 A man walks past a billboard featuring a photo of Chinese President Xi Jinping beside lantern decorations for the Lunar New Year in Baoding, in China's northern Hebei province on February 24, 2015. The Chinese characters read "Together realize one Chinese Dream."

Following is ASPI’s translation of a Q&A with ASPI President Kevin Rudd that first appeared in the Asahi Shimbun, one of Japan's oldest and largest national daily newspapers.

China is rapidly expanding its economic and military influence around the world. The "China Standard" is changing heretofore recognized international social standards and norms. We asked Kevin Rudd, former Prime Minister of Australia, who has spent half his life working on Chinese affairs, his view on these circumstances, and why intelligence experts have shifted toward a cautionary stance on China.

Kenji Minemura for the Asahi Shimbun: You are an expert on classical Chinese literature and the Chinese language. Recently, it appears as though China is receiving increasing amounts of criticism. What do you think is the cause?

Kevin Rudd: Everything changed on November 28, 2014. That's when, at the Central Conference on Work Relating to Foreign Affairs, where China's Communist Party's discusses its diplomatic objectives, Head of State Xi Jinping put forth a worldview vastly different from any we've seen before.

He announced that China is taking initiative, repainting the existing international order in a Chinese style. The country is accomplishing this through, among other things, Chinese leaders' enormous economic bloc plan, ‘One Belt One Road,’ and the Asian Infrastructure Investment Bank (AIIB). No one is surprised or disappointed. That's because China, now a major power, has advanced into foreign markets’ established procedure.

You’ve told me before that China is going to start cooperating with the international order. Was your analysis mistaken?

Kevin Rudd: I do not think my analysis was incorrect—at least until 2014. China has changed greatly. China slowly built up its regional and international presence during the Jiang Zemin and Hu Jintao regimes. But after Mr. Xi came to power, China accelerated its advancement internationally in the fields of military, diplomacy, and economy. China is no longer a country content with its current circumstances.

What is China trying to do with the world?

Kevin Rudd: I believe it is implementing what Mr. Xi is calling the great revival of the Chinese people — the ‘Chinese Dream.’ By the 100th anniversary of China’s founding in 2049, China wants to regain its standing at the top of international influence. China has been viewing Mr. Trump’s recent moves to withdraw the United States from the world and weaken its international influence as an opportunity. China is propagating a Chinese-centric international order in the space left behind by the United States.

But I don’t understand why China must make an enemy even of the United States in order to continue building its own order.

Kevin Rudd: As long as China is advancing its reform and opening up policies, the international community expects it to abide by the accepted Western international order regarding its human rights issues and market opening. China is rejecting this pressure, conversely attempting to propagate a Chinese-centric model to the world.

The Chinese Communist Party’s guiding principle is to survive through to the future. In order to do so, it must preserve its ideology and political influence. As such, Chinese state capitalism must triumph over Western democracy and capitalism.

Discussion of the Chinese threat within the U.S. has escalated in response to China’s hawkish behavior. Even in Washington, pro-China voices are becoming almost nonexistent.

Kevin Rudd: As a matter of fact, U.S. researchers and scholars on China who have tended to be understanding toward China are shifting toward a hardline stance. More than anyone else, those who interact with Chinese scholars and media, governmental pressure toward Chinese academia is strengthening, is felt deeply. They are shocked.

The U.S. involvement policy in place since 1978 has come to an end. The U.S. had aimed for China to enter the international community through its involvement and by encouraging its development and democratization. However, China didn’t open its markets enough for U.S. industrial exports and investments. Furthermore, far from becoming ‘responsible stakeholders’ of the rules-based order, China is attempting to construct its own order. And domestically, far from becoming more democratic, China is tightening its order as if regressing toward an older form of socialism.

China’s economy is currently second only to the United States’. China’s rise, its policy changes, and U.S. reactions are all structural issues. 2018 will no doubt be remembered as a year of fundamental divide in U.S.-China relations.

Have we entered a “new Cold War?”

Kevin Rudd:It is dangerous to use that word at this stage. 'Cold War' refers to a state of ideological warfare or proxy warfare in a third country, as well as a cut-off in both interaction and economy. U.S. and Chinese ideologies certainly differ, but on the other hand, there are hundreds of thousands of Chinese students living in the United States, and trade between the two countries is the world's largest. Further, it’s not as though there is a proxy war happening anywhere.

If U.S.-China antagonism deepens, wouldn’t U.S. allies, such as Japan and Australia, get involved?

Kevin Rudd: The U.S. is likely preparing diplomatically, economically, and militarily for the possibility of conflict escalation, crisis management, and even war with China.The more this conflict deepens, the more likely are third party countries to be pulled into the conflict by each side. Should that happen, they will be forced to make a difficult choice.

When you served as Prime Minister and Foreign Minister, you were considered pro-China.

Kevin Rudd: The Labor Party, in which I served as leader, is sometimes referred to as ‘pro-China,’ but in reality it pursues a well-balanced China policy. Australia is a continent, but has a population of only 25 million, so it needs foreign investment. However, when accepting foreign investment it is always necessary to consider whether it really benefits Australia. That's why I refused investment by Chinese state-owned enterprises in Rio Tinto, a leading Anglo-Australian natural resource company. We also do not allow China's telecommunications giant Huawei to enter the next generation telecommunications standard "5G" network.

However, the Coalition Party, which replaced the Labor Party, has adopted different policies toward China. While it had originally taken a tough stance towards China, in 2015 it signed a 99-year lease handing over Northern Australia’s Darwin port to a Chinese company. What’s interesting is that the Coalition Party calls me a China hawk.

A member of the Labor Party resigned after being questioned about an inappropriate relationship with a Chinese entrepreneur. Should Australia continue in the present way, will it not be swallowed up by China?

Kevin Rudd: That will not happen. This is because we are creating laws that regulate donations and technological investments from foreign countries. The question of how much democratic nations like Australia and Japan can engage economically with China while protecting their national security and political values is one we must start dealing with. It's not impossible, but it won’t be easy either.

Including your time as a student, you have maintained close ties with China for 40 years. Do you ever feel betrayed by the way China has changed in recent years?

Kevin Rudd: No, my personal views have not changed. The real problem is that as a result of China becoming a major power, it no longer wants to accept the laws and rules based on a free and open international order.

Now that the U.S. “involvement policy" has come to an end, how might we best face China?

Kevin Rudd: One thing that should not be forgotten is China’s contribution so far. Over the past 15 years, China has been the largest engine of global economic growth. Without China’s growth, the world economy would no doubt have further declined. It is a question of whether we can accept China and its new framework without abandoning the current free and open international order.

This seems like a challenging task. What should be done?

Kevin Rudd: We would need to perform surgery on our own system. The most important quality of a liberal system is equality--which is to ensure equal opportunity for all people to make use of their individual talents. Regarding capitalism as well--the Lehman Shock financial crisis of 2008 resulted from the United States having managed the global financial system with a kind of money game-like ‘casino capitalism.’ We need to rebuild a sound capitalist order that is socially and economically responsible. "

But the Trump Administration’s policies seem to contradict that idea.

Kevin Rudd: Exactly. The U.S. has withdrawn from the UN Human Rights Council, it constantly criticizes the World Trade Organization, and it has halted its contributions to UN agencies. This makes it difficult for us to protect the rules-based international order. The problem with the Trump Administration is that it follows a U.S.-centric approach void of a clear idea of global interests and values.