A Q&A with April Rinne, independent advisor to China's National Committee on the Sharing Economy 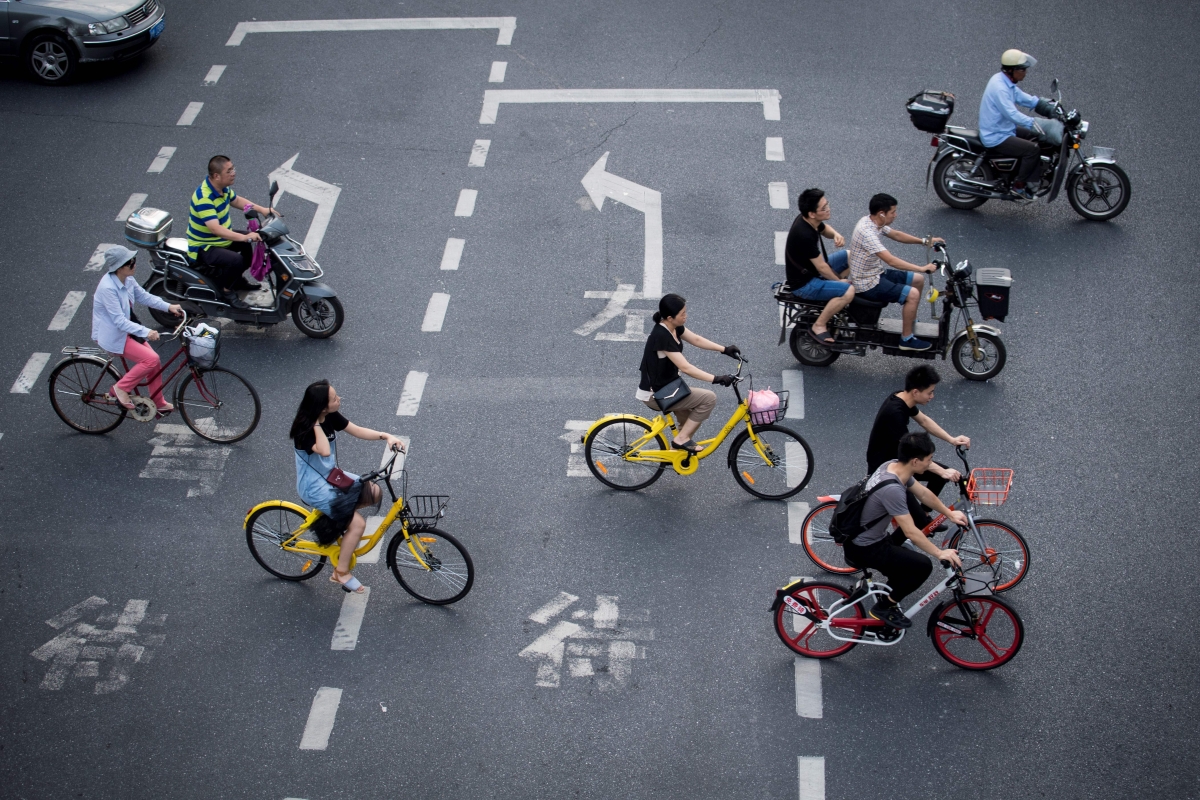 Two women (center) riding yellow bicycles from Ofo, the bike sharing company, in Shanghai on July 3, 2017. Another shared bike, an orange one from rival Mobike, is ridden by a man (right). Authorities in Shanghai and Tianjin have imposed regulations on the rapidly growing bike-sharing sector following mounting complaints over an accumulation of millions of the rentable two-wheelers on city streets..

Residents of Washington, D.C., first saw China’s arrival in the American sharing economy manifest in the thousands of bright orange and yellow share bikes dotting the sidewalks of the U.S. capital. To understand what’s behind the 40 percent growth Beijing forecasts for China’s sharing economy, and the sometimes-hyperbolic press about Chinese companies cornering the global sharing market, Asia Society Policy Institute Director for Political-Security Affairs Lindsey Ford spoke with April Rinne, an independent advisor and one of just a few non-Chinese to sit on China’s National Committee on the Sharing Economy—a group whose statistics show some 600 million people were employed in the sharing economy in China in 2016.

Lindsey Ford: One important aspect of understanding China’s sharing economy is that they define sharing differently. You’ve described it as more of an "access economy" than a traditional "sharing economy." Can you explain this a little more?

April Rinne: I've been looking at the sharing economy in China for the last several years and for many years it was quite silent, until 2015-2016, when it was declared a national priority. When the government decides something is a national priority it’s like a light switches on overnight and things start to happen.

Prior to that time we weren't able to get a lot of data. We've always known that bike sharing—like bike riding—is quite big in China. Any Chinese bicycle-sharing program would dwarf anything that we’ve seen elsewhere. But what we've seen in recent years is something quite different.

I don't want to say just in the West, but generally speaking, globally, when we look at the sharing economy we're looking at some combination of business models that harness new technologies to create platforms that help people share rather than own what they have. This has economic benefits; this has environmental benefits and, ideally, this has community benefits—where we're seeing people coming back into relationship when they're sharing something.

In the case of China, they seem to apply the “sharing” adjective to almost everything under the sun—what we would think of in the West as something more like the digital economy or the platform economy: effectively anything that's based on new digital technologies or built on new digital platforms. That is a much broader definition than we would typically [use to define] the sharing economy here in the U.S. and Europe.

China seems to have lumped it all together, which in part describes or explains why the market is so big and why they are so bullish about its growth.

Ford: In China's sharing economy, there’s a crazy array of things that can now be shared. One of my favorite startups was the company offering shared toddler toys to help parents cut down on costs when their kids go through new toys every few months. That was complete genius. But then there was also the umbrella-sharing startup that lost its entire stock of 300,000 umbrellas in a few months because nobody returned them. You kind of have to wonder: do all of these models make sense? Is there really a need for some of these things to be part of a sharing economy?

Rinne: I think the umbrellas and the basketballs gave China some really interesting press. Some made us think, “I think we might be taking a little bit too far.” Several months ago there was a launch of what we could think of as modular gyms. The photos looked like you had a treadmill in a closet. “Oh, look, it’s on-demand fitness.” But I'm not really sure what we're sharing here. I understand that people want to get fit and will focus on wellbeing and that it was very much on-demand—you could just book time on a treadmill—which is great. But then there’s no difference, in that case, if we want to call your traditional gym an example of the sharing economy. We could do that because not everyone has a treadmill at their house. They're all sharing it in this collective space. But [the company] took this concept that makes sense in many different settings and [I looked at it] and thought, “This is just odd.” This is the antithesis of something that would build community because you're basically swapping-in to use one treadmill in one closet—the most impersonal fad you can imagine. That’s one example. There are many. We've even seen shared flowerpots.

But I want to come back to definitions, because the sharing economy, the collaborative economy, these are often interchangeable terms but we also have seen in recent years—and, again, this is globally—we've seen the rise of the on-demand economy, the freelance economy, the gig economy, the peer economy, etc. Many people are lumping these terms together, but they're actually very different. So, take the example of the flower pot: basically, what you're doing is accessing a flower pot on-demand, right now. There's no guarantee that you're sharing that flower pot with somebody else. There's no guarantee that it's better for the environment, and often it’s not less expensive. But, going back to your earlier question, it is about access, which I absolutely applaud. But we really need to be scratching beneath the surface thinking, “What are we really looking at in terms of economics, environment, and community building?” Is this truly a better business model or are we just slapping this term on to something to make a flashy press release and perhaps a quick buck?

Ford: Yes, you’ve got to question if there’s demand for things like a gym pod and a shared flower pot.

Rinne: Some things are uniquely Chinese and others are more global. In the case of the umbrella company, it folded quite quickly because people realized there wasn't enough of an incentive for people to return them.  They’re pretty cheap and if you really want one it’s not that horrible to go buy one. They did ask for a deposit but the deposit was so low that people just said, “Forget it! I’ll keep the umbrella, you can keep my deposit. I don't really care.” Which is indicative. When you look at the assets that are best utilized in the sharing economy, those things that have the most success tend to have two criteria: one, high—or higher—purchase price; and two, low frequency-of-use. If you have something that's relatively expensive and not used [up] very often, that’s nirvana for the sharing economy: like a car, like your house, like your office space. Then there's a significant cost savings.

Ford: What's behind the sharing economy craze in China? Is it simply venture capitalists throwing money at a hot concept, or is there something more? Is the Chinese government really trying to push growth in this sector?

Rinne: Chinese, as they often do, really do scan what's happening globally. They spend years doing research and figuring out where trends are going. For a year, as I've been trying to figure out what was happening with the sharing economy within China. We know, for example, that bike sharing has always been quite popular—bicycle riding and bike sharing and communal ways of living. But it was very difficult to get a sense of what was really going on until late 2015, when the Chinese government announced that the sharing economy is a national priority and almost overnight investment starts flooding in, entrepreneurs start getting onboard, the government start investing a ton. They established a National Sharing Economy Committee, on which I serve as one of just a few non-Chinese. Part of this relates to a government desire to be a peer among equals or first among the larger countries in the world around the digital economy and digital innovation. They were looking at and continue to look at a very stark reality of their earlier wave of growth, which was around construction and building and production. That is a very hard model to sustain indefinitely.

So how do we keep up our growth rates? How do we boost GDP? I think they saw this as a little bit of a saving grace, perhaps overly optimistically. There was definitely a push to keep our numbers up and they were looking around at the world of entrepreneurship and investors and saying, “Ooh, everyone else seems to be doing this, we should be doing this as well.” And, to some degree, it fits—again going back to a more traditional concept of the sharing economy—there are certain elements that overlap quite nicely with Chinese culture and tradition, but again they've really kind of blown that beyond realistic proportions and in many ways, as we look at how they're defining it, what they're investing and how much they're investing. One of the points of concern that I have is that this has become such a hot, sexy term that money is being thrown at these platforms without necessarily doing a lot of homework or due diligence.

Ford: Is China’s sharing economy headed for some kind of bumpy adjustment?

Rinne: Unfortunately—and I say this because I am still a big advocate, ambassador, and champion of this concept the sharing economy, so it pains me to say this—I do think that they're in for a rude awakening.

Ford: Is the Chinese government doing anything to rein in this growth? Are they concerned that it's become a little inflated?  Are they at least trying to regulate the sector a little more around how companies are allowed to operate on the national or local levels?

Rinne: There's a great case study here around ride-hailing regulations that were passed last year. By and large it's pretty forward thinking in terms of legitimizing ride-hailing, seeing it as a key component of transportation policy. The cities got quite excited, more activity started taking place, and then there was a subsequent rule that was passed that said drivers had to provide proof of where they lived and they could only drive in the city in which they [are registered to live]. Now, this affected something like 80-plus percent of drivers, many of whom found out almost overnight that they couldn't drive where they were currently living because they had migrated in a typical shift from rural to urban. And so [the rule] had a real dampening effect. In that case, [the rule] wasn't so much about, “Oh, we want to promote the sharing economy.” It was done more [out of a desire] to restrict or control the mobility of people in the country. So really interesting dynamics come into play. And in that case, even if cities had really wanted to be proactive around developing ride-hailing as a service industry they would have been really hampered by some of the national policies in place.

Ford: What should we expect in the next five years from what we might call the 2.0 version of China’s sharing economy?

Rinne: I think we're going to see multiple rounds of ebb and flow or boom and bust, from an investor perspective. On balance, unless there's a significant policy shift in the narrative coming from government and the private sector I think we will see more people using these platforms. There will be even more of a sense of the Wild West, a sense of unpredictability and instability in the market because it has been so loosely defined. It has that sense of growing out of infancy into adulthood—there's going to be a lot of awkwardness and clumsiness that comes along with adolescence.