The Blood Telegram: Nixon, Kissinger, and A Forgotten Genocide by Gary Bass 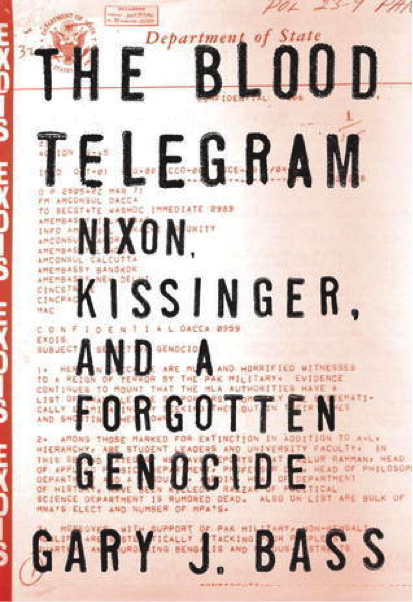 The Blood Telegram: Nixon, Kissinger, and a Forgotten Genocide by Gary Bass (Alfred A. Knopf) has won the 2014 Asia Society Bernard Schwartz Book Award. Gary Bass was presented with a $20,000 prize and honored at a special event at Asia Society’s headquarters in New York City on December 9, 2014.

The Asia Society Bernard Schwartz Book Award is the only award that recognizes nonfiction books for their outstanding contributions to the understanding of contemporary Asia or U.S.-Asia relations. The Blood Telegram was selected from over 100 nominations submitted by U.S. and Asia-based publishers for books published in 2013.

A jury co-chaired by Tommy T. B. Koh, Singapore’s Ambassador-at-Large, and Carol Gluck, George Sansom Professor of History at Columbia University, and composed of leading experts and figures from policy, academia, and journalism from Indonesia, Japan, Singapore, Thailand, and the United States selected the winner and honorable mentions.

According to Dr. Gluck, “The Blood Telegram is a compelling account of the origin of the independent state of Bangladesh in 1971, showing how the United States acted in its own national interests in the context of Cold War geopolitics to deal, or rather not to deal, with the mass atrocities and humanitarian crisis in East Pakistan.”

Ambassador Koh added, “Gary Bass’s book shines a strong light on the tragic events which took place in 1971 in what is now Bangladesh. The book forces the reader to think hard on such important questions as the competition between morality and state interest in foreign policy.”

Two Honorable Mentions were also chosen: Return of a King: The Battle for Afghanistan, 1839-42 by William Dalrymple (Alfred A. Knopf) and China Goes Global: The Partial Power by David Shambaugh (Oxford University Press). Each will receive a $2,000 prize.

Carol Gluck (Jury Co-Chair) is the George Sansom Professor of History at Columbia University. She specializes in modern Japan from the late nineteenth century to the present, international relations, and historiography and public memory in Japan and the West. Her most recent book is Words in Motion: Toward a Global Lexicon (Duke University Press, 2009). Her latest book, Thinking with the Past: Modern Japan and History, was published by the University of California Press in 2013, and Past Obsessions: World War II in History and Memory (Columbia University Press) is forthcoming.

Tommy T.B. Koh (Jury Co-Chair) is Singapore’s Ambassador-At-Large, Special Adviser at the Institute of Policy Studies at the Lee Kuan Yew School of Public Policy, and Chairman of the National Heritage Board. He is on secondment from the Faculty of Law of the National University of Singapore. Among his many government appointments, he has served as Singapore’s Permanent Representative to the United Nations, High Commissioner to Canada, and Ambassador to the United States and Mexico. He is a member of Asia Society’s Global Council and chaired Asia Society’s Leadership Group on Water Security in Asia. 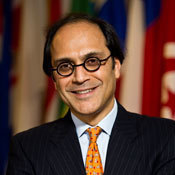 Bhaskar Chakravorti is the Senior Associate Dean for International Business and Finance and Executive Director of the Institute for Business in the Global Context (IBGC) and the Council on Emerging Market Enterprises (CEME) at the Fletcher School of Law and Diplomacy at Tufts University. Previously, he was a Partner of McKinsey & Company and a Distinguished Scholar at MIT’s Legatum Center for Development and Entrepreneurship. He also served on the faculty of the Harvard Business School and the Harvard University Center for the Environment. His prior appointments include Partner and Thought Leader at Monitor Group and officer of TAS, the executive cadre for the Tata Group, among others. 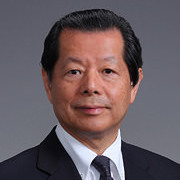 Yoichi Funabashi is Chairman of the Rebuild Japan Initiative Foundation and a former Editor-in-Chief for the Asahi Shimbun. He is a contributing editor of Foreign Policy. He served as correspondent for the Asahi Shimbun in Beijing (1980-81) and Washington (1984-87), and as American General Bureau Chief (1993-97). In 1985 he received the Vaughn-Ueda Prize for his reporting on international affairs. He won the Japan Press Award, known as Japan’s “Pulitzer Prize”, in 1994 for his columns on foreign policy, and his articles in Foreign Affairs and Foreign Policy won the Ishibashi Tanzan Prize in 1992. He is a member of Asia Society’s Global Council.

Susan Glasser is the editor of POLITICO. Previously she served as editor-in-chief of Foreign Policy, where she oversaw its relaunch in print and as a daily online magazine. Before joining Foreign Policy she was a longtime foreign correspondent and editor for the Washington Post. She spent four years as co-chief of the Post’s Moscow Bureau, throughout President Vladimir Putin’s first term, during which time she also traveled extensively around the countries of the former Soviet Union. Together with her husband, New York Times White House correspondent Peter Baker, she wrote Kremlin Rising: Vladimir Putin’s Russia and the End of Revolution, which was published in 2005. She also covered the wars in Afghanistan and Iraq as a correspondent for the Post.

Thitinan Pongsudhirak is Associate Professor of International Political Economy and Director of the Institute of Security and International Studies at Chulalongkorn University, Bangkok. His publications have focused on Thailand’s political economy, foreign policy, and media, as well as ASEAN and East Asian security and economic cooperation. His comments and op-eds have been featured in international and local media. He has held positions at BBC World Service and The Economist Intelligence Unit, as well as visiting positions at The School for Advanced International Studies, Stanford University, and Singapore’s Institute of Southeast Asian Studies. His Ph.D. at the London School of Economics received the UK’s best dissertation prize.

Susan Shirk is the chair of the 21st Century China Program and Ho Miu Lam Professor of China and Pacific Relations at the School of International Relations and Pacific Studies at UC San Diego. She is also director emeritus of the University of California, Institute on Global Conflict and Cooperation (IGCC), and chair of the IGCC International Advisory Board. From 2008–09, she was the Arthur Ross Fellow of the Center on U.S.-China Relations at Asia Society. She also served as Deputy Assistant Secretary of State in the Bureau of East Asia and Pacific Affairs from 2000–03. She has written and edited several books on China.

Rizal Sukma is Executive Director of the Centre for Strategic and International Studies in Jakarta, Indonesia. He is also Chairman of International Relations in the Muhammadiyah Central Executive Board, and a member of the Board of Governors of the implementing agency for the Bali Democracy Forum at the Institute for Peace and Democracy. He has served as a member of the National Committee on Strategic Defense Review at the Ministry of Defense of the Republic of Indonesia, and the National Drafting Committee for the National Defense Bill and the Armed Forces Bill. He is the first Indonesian to receive the Nakasone Award and was named as one of 100 Top Global Thinkers by Foreign Policy magazine in 2009.