PNoy & Pinoy: A Year After, a pre-SONA forum 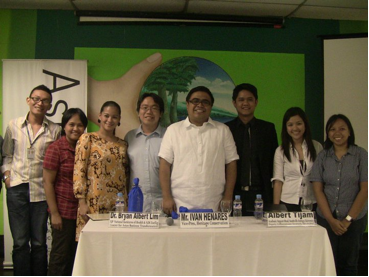 MANILA, July 22, 2011 -- The Asia Society, a leading institution that promotes international understanding between the leaders of Asia and the United States of America (USA) recently held forums at the Asian Institute of Management (AIM) and Miriam College to assess the performance of President Benigno “Noynoy” Aquino III in his first year in office. Known experts in their respective fields, Ramon Casiple, Juan Miguel Luz and Roland Simbulan spoke and gave their assessments at the Asian Institue of Management in Makati City. Casiple, the Executive Director of Institute for Political and Electoral Reform, evaluated the administration in terms of his governance. According to him, the main problem of the administration was that there was no concrete short, medium or long term plans on governance. In terms of tackling poverty, comprehensive anti-poverty programs have still yet to be established and realized at the grass root levels. However, Casiple rated PNoy quite high in terms of cleaning up corruption, taking into account the resignation of former Ombudsman Gutierrez. Casiple rated PNoy’s administration a 76% or a 6 out of 10. Although much has still yet to be done, Casiple commended PNoy for his actions in consolidating power and for bringing back the trusted confidence in the government.

Former Department of Education Undersecretary Luz, who is also the Associate Dean of the AIM, addressed the administration in terms of its delivery of social services to the poeple. He lauded PNoy for passing the budget on time, a feat that hasn’t happened since 2000. At the same time, he also supports the move of the administration to increase the number of years in basic education from 10 years to 12 years citing the experience of other progressive Asian countries such as Singapore and Japan, both of whom have at least 12 years of basic education. However, he cited the need for the administration to prioritize the development of a comprehensive program that would generate much needed jobs here in our country. Luz emphasized that the administration is still in the planning stage and for it to be effective PNoy must have the political will to bring about structural change by focusing on how things are done stating: “It’s not how you start; it’s how you finish.” Simbulan, a professor in Development Studies and Studies and Public Management, tackled the administration’s foreign policy. Simbulan states that one objective of our foreign policy should be reclaiming control of our resources. Although there has been a lack of progress in this area, he also states he still believes and supports the present administration.

In Miriam College, Asia 21-Philippines Young Leaders fellows’ Ivan Henares, Bryan Lim and Albert Tijam Jr. evaluated the administration in terms of tourism, public health and governance respectively. Henares, a popular travel blogger and staunch advocate for the preservation of Philippine Heritage, stressed on the importance of tourism and how essential it is for our country’s progress. According to him, being declared a Tourism Economic Zone (TEZ) should be one of the administration’s goals since it provides large tourism potential as well as employment and investment opportunities. Also, the Department of Tourism should consider the importance of the Open Skies policy, where more flights to the country would bring more tourists. He gave an 80% for PNoy’s overall administration for the past year.

On public health, Bryan Lim, a physician at San Pablo Doctors’ Hospital, rated PNoy a 60% stating that he is still taking baby steps. Universal health care, which was promised by our President, must be achieved through reforms in the healthcare industry and greater support from the private sector. He also said that he approves of sin taxes since it can help raise much needed revenues that will help provide health coverage to more Filipinos and lessen health risks as well since it will help deter more Filipinos from smoking. Albert Tijam Jr., the Head of Academic Support Services in Southville Foreign School, gave a score of 80 percent in terms PNoy’s governance citing his efforts to lead by example. Participants of the forums have generally expressed that it is too early to rate PNoy’s administration given that it has had only been a year since he took office.

Although our President has done considerable progress based on what he promised, students from both AIM and Miriam College are expecting him to deliver more concrete results in the upcoming years ahead especially in providing better access to quality social services.