A Panel Discussion on the Impact of Netflix's Trese 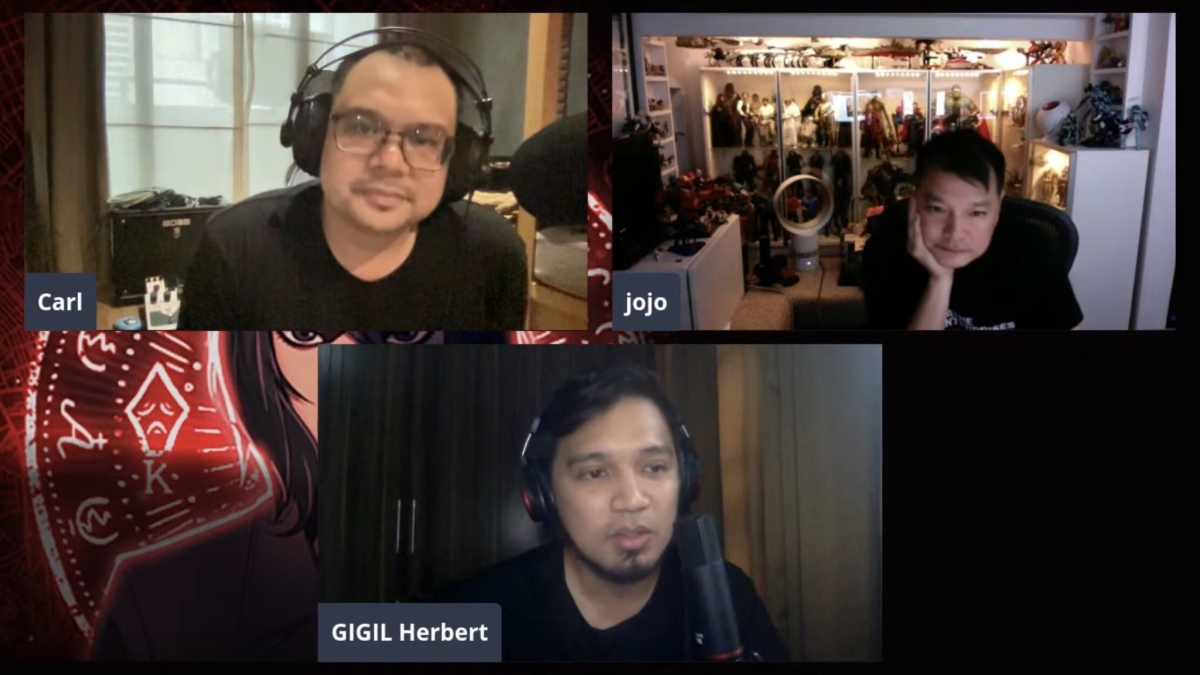 30 July 2021—One of the most locally hyped and marketed shows to have come out of Netflix this 2021 was Trese, the first Filipino comic-based anime. Based on the fantasy, crime-horror comic book series of the same name created by Budjette Tan and Kajo Baldisimo, it reached top spots in the streaming giant’s Top 10 charts in 19 countries in just less than a week. This was a milestone both for the Filipino creative community that played a role in everything from its conception to production to the marketing that made it go viral, as well as to the Filipino people as a whole with its worldwide reach and global success.

In view of this, Asia Society Philippines hosted a special webinar last 30 July 2021 entitled “Trese: A Creative and Cultural Milestone.” Moderated by PumaPodcast’s CEO Carljoe Javier, it featured Jojo Aguilar, Art Director of Netflix’s Trese and Creative Director at Lex+Otis Animation Studios; and Herbert Hernandez, Founding Partner of GIGIL, The Ideas Company, the agency behind Trese’s viral marketing campaign. Their discussion revolved around how Netflix’s Trese became a global hit, what went on behind the scenes, and what drove its overwhelming success.

The panel shared their experiences when they first encountered Trese. Jojo Aguilar recalled, “Jay Oliva (whom he was working with at the time) asked me, and I was like, ‘Wow, this is a dream come true because it’s Filipino, and I’ve never one any project that was solely Filipino.’” He mentioned that when Jay eventually started his own company and made him Art Director, it further exposed him to the book. “I fell in love with it, and then they flew us out to Manila to do research… that’s how I was introduced and that’s how I fell in love with the project, and I’m still in love with it.”

Meanwhile, Herbert Hernandez cited two things, the first of which was that he was a huge comic book fan to begin with. “Bata pa lang ako, Comics collector na ako. Hindi lang foreign comics, kundi Filipino comics” (I've been a Comics Collector since I was a kid, not only foreign comics but also Filipino comics.) Second, he was a big fan of Budjette Tan, the writer behind the Trese comics. “Pareho kaming agency people noon. Si Budjette Tan ‘yung naging peg ko na you can do both advertising work and your passion.” (Budjette and I worked in the same agency before. Since then, I've admired him for being able to do both advertising work and your passion.) It was both amusing and interesting then that his passion for comics and the works of one of his idols coincided through this project. Similarly, things went full circle as he was able to repay those inspirations by putting Filipino comics back on the radar through Trese.

The discussion then headed to the processes both parties went through during the conceptualization, planning, and execution of the project. Aguilar started with the stellar backgrounds which aptly represented Filipino cityscapes, as he mentioned that most of his social media followers would comment on those details. He gave credit to Tanya Yuson, one of Trese’s Executive Producers, and shared how it was Yuson’s initiative to fly them out to the actual locations to capture as much of the details as possible. He also gave a nod to Kajo Baldisimo’s artworks for the original comics. With humility, he said, “All I did was basically put color and say, ‘Hey, this has to be, like, moody, or dirtier, or something apt for the scene.’”

Carljoe Javier added his own experiences with cityscapes and transitioned to an underpass mural he saw as part of Trese’s campaign. Surprised to see the scale of it for something that’s inherently Filipino, he asked about the conceptualization of the marketing project. Hernandez credited their client, Netflix Philippines. He mentioned how Netflix really wanted “something big out there,” “‘yung tipong mapapa-’Oh my god, ginawa ‘yun ng Netflix para sa Trese.’” (the type that will make you say Oh my God, Netflix did that for Trese) He thanked their client’s direction, giving much focus on Filipino pride. This would go on to be a theme widely explored and felt throughout their process. They likened the marketing efforts to the hype surrounding the Olympics, or to the pride felt with every boxing match of Manny Pacquiao. Hernandez likewise credited the campaign’s success to how they started on the project by asking the comic fans. “Lahat ng creatives ko, fans. ‘Yung sa accounts, fans. Malaking factor yun dito na yun ang una naming ginawa.” (All of my employees involved, from creatives and accounts departments, were fans. It was a big factor to our work.) He continued by saying their next step was to immerse themselves in the source material, particularly through an interview with Budjette Tan himself. As everything fell into place, their conviction for the project grew, and their collective “Filipino pride” allowed them to put their hearts into every aspect of the product delivered.

Talking about the success of Trese now, Hernandez shared how the marketing campaign achieved its goal by going viral, allowing it to reach people outside of its existing fanbase. People who were outside their target market and had no idea that such a series existed were suddenly bombarded with the campaign, and they were eager and excited to know what it was all about. At the same time, he highlighted how the essence of the show was, simply put, “bringing the folklore to the city,” which was exactly what GIGIL did—amplifying that essence, bringing those characters from the show to billboards.

Javier also stated, “This is the tip of the iceberg of a huge comics community na maraming bagong kwento,” (This is the tip of the iceberg of a huge comics community with plenty of new stories) further reinforcing the trajectory of not just the Filipino comics industry, but the country’s entire creative arts community, thanks to the worldwide sensation that is Trese. Contrary to what some have been speculating, the Filipino comics industry is alive and well as Hernandez put it. Whatever the case may be, Aguilar added that there is no doubt that a resurgence has been triggered by the series, one of a new kind of more mature genre. “Hopefully, with the popularity of Trese, more comics like this will come out and there will be more Filipino exposure around the world.” Javier ended the discussion by stating that Netflix is only one of the platforms and creative avenues “that [creatives] can access so that the world can see how good Filipino work is.”

The same message came from the opening remarks of Kaitlyn Magtoto, ASPH’s Program Officer, “when the Filipino creative community is given a platform to bring together all their creative powers, the result can be nothing less than an artistic success.” These sentiments were echoed in the closing remarks by Ceej Tantengco, PumaPodcast’s Head of Marketing, quoting the recent and first Filipino Olympic Gold Medalist, Hidilyn Diaz, “Akala natin imposible, pero kaya ng Pinoy.” (We thought it's impossible, but Filipinos definitely can.) As a whole, the unanimous opinion was that Netflix’s Trese has put Filipino comics and Filipino creativity on the spotlight once more, giving all forms of local art equal chances to flourish given the right platform.

Watch the full discussion on Trese below: