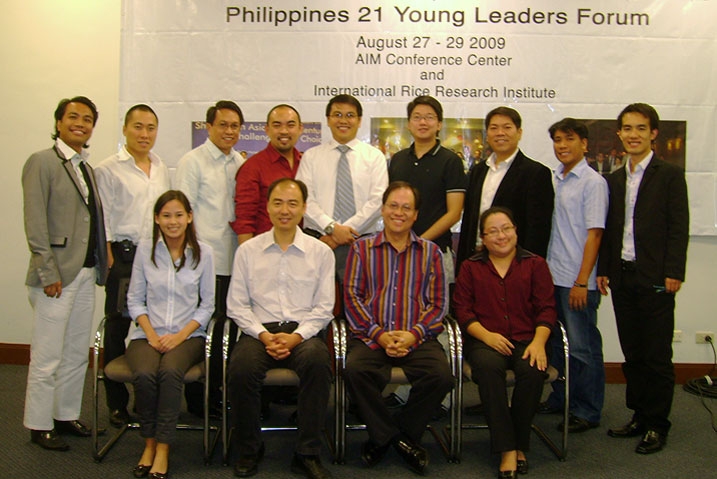 MANILA, September 13, 2009 - Business entrepreneurs, cultural workers, civic leaders, and education advocates comprise the Class of 2009 of the Philippines 21 Young Leaders Initiative. Established in 2006 by Asia Society Philippines and social entrepreneur/governance advocate Harvey Keh, the program is the first locally-organized chapter of the Asia 21 Young Leaders Initiative, which aims to develop a core group of leaders aged 25-40 to meet, educate, and inspire each other; collaborate and share ideas on public service and other meaningful initiatives, and build relationships of trust and understanding.

Name recall
Philippines 21 Fellows are a mix of prominent names and promising young talent. Business leaders know of the success of Enrique Gonzales and Rommel Juan. Gonzales took his IT start-up IPVG Corp. from garage to public and has since expanded operations from their RP homebase to seven countries, including India and the United States. Juan’s native food chain Binalot Fiesta Foods, on the other hand, has become one of the more successful local franchises. And as of late, Dynamic Teen Company and Efren Peñaflorida’s alternative kariton classrooms for out of school youth have caught public attention, thanks to the latter’s CNN Heroes nomination and participation in the Ako Mismo advocacy campaign.

Regional representation
The Class of 2009 is the most geographically representative Philippines 21 batch to date, with seven out of ten Fellows coming from or residing outside Metro Manila. Steve Arquiza and Cecile Dominguez hail from Davao and Sarangani respectively, and are dynamic examples of young Mindanaoan leadership. Arquiza is secretary-general of JCI Davao and immediate past president of the Mindanao Young Leaders Parliament, while Dominguez heads the Conrado and Ladislawa Alcantara Foundation. And though city councilors Jocelle Batapa-Sigue (Bacolod City) and Jose Romeo de la Cruz (Santiago City) may hail from different parts of the country, they share a vocation for public service, and support environment and youth issues.

Cross-sectoral involvements
Aside from demonstrating expertise in their chosen field and the spirit of community service, Phils 21 Fellows also share an inclination for cross-sectoral activities. Darwin Mariano’s day job as public affairs head of Cemex Philippines does not hinder him from his duties as core member of Movement for Good Governance. Mariano has supported this advocacy since his days as the founder of Aksyon Demokratiko Youth. Ryan, on the other hand, is a licensed phycisian whose Cordillera heritage has imbued him with a sense of cultural pride. He founded two NGOs: KOSDEY, which promotes and preserves Ibaloi culture, and DITENG, which advocates culture-sensitive health programs. And while UP Los Baños’s. Dennis Gupa is primarily a stage director schooled in classical and contemporary theater, his work in theater-in-education has led him to collaborate with science researchers and social scientists to develop educational and/or socially relevant plays.

The selected Fellows convened at the Philippines 21 Young Leaders Forum on August 27-29, with support from the International Rice Research Institute and official media partner Philippine Daily Inquirer. The Class of 2009 will also represent the country in the Asia 21 Young Leaders Summit, organized annually by Asia Society’s New York headquarters, to be held in Kuala Lumpur in November 2009.