Eyes on the Women of Asia

In Celebration of Women's History Month 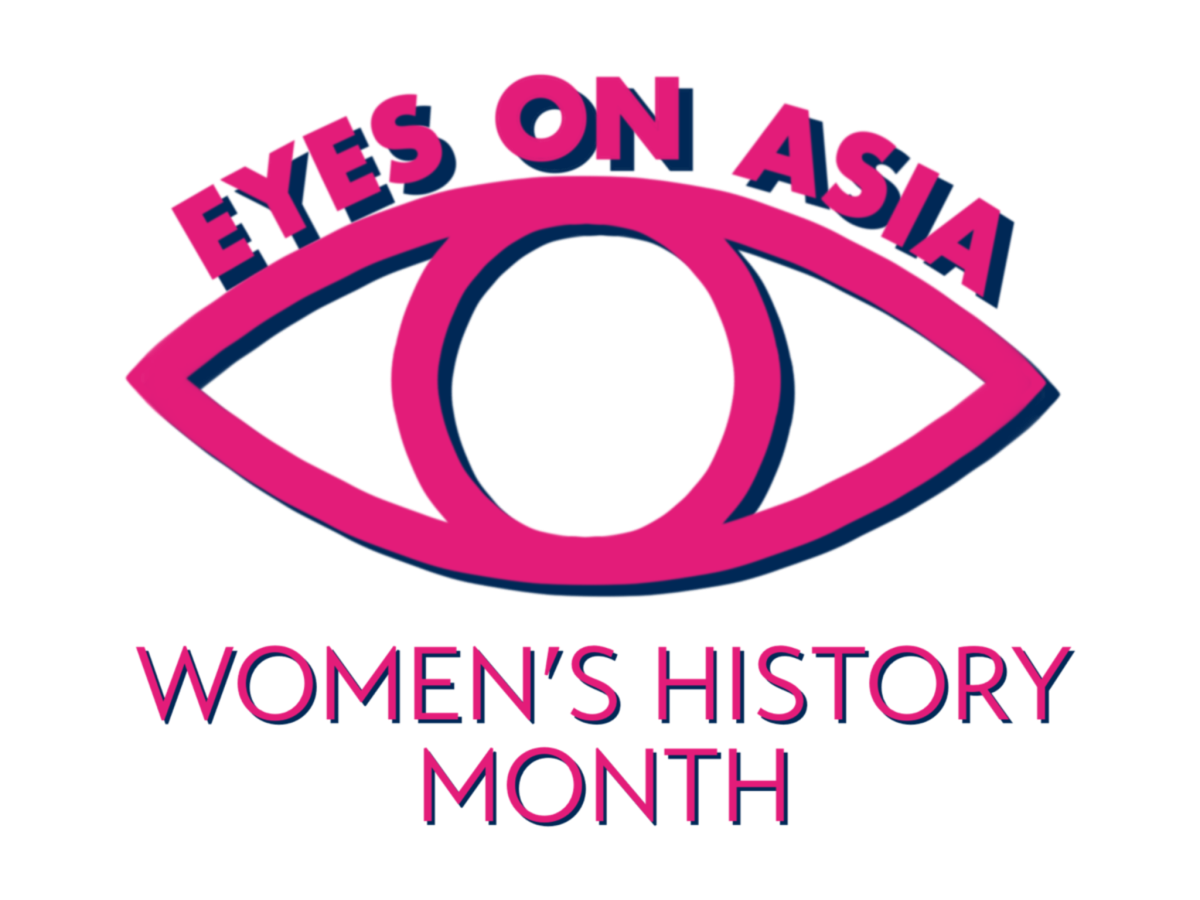 In celebration of International Women’s Day and Women’s History Month this March, Asia Society Philippines partnered with Ramon Magsaysay Award Foundation for a special series, Eyes on the Women of Asia, highlighting the women of Asia whose works have helped shape a better future for all.

Through this series, we remember, recognized, and celebrate the achievements and contributions of five exemplary women who tirelessly uphold women’s rights and empower them. These five women— Michiko Ishimure of Japan, Angela Gomes of Bangladesh, Tri Mumpuni of Indonesia, Lahpai Seng Raw of Myanmar, and Kommaly Chanthavong of Laos— serve as inspirations for everyone, especially women, to continuously smash boundaries and shatter gender stereotypes.

Read more on the stories of these inspiring women below: 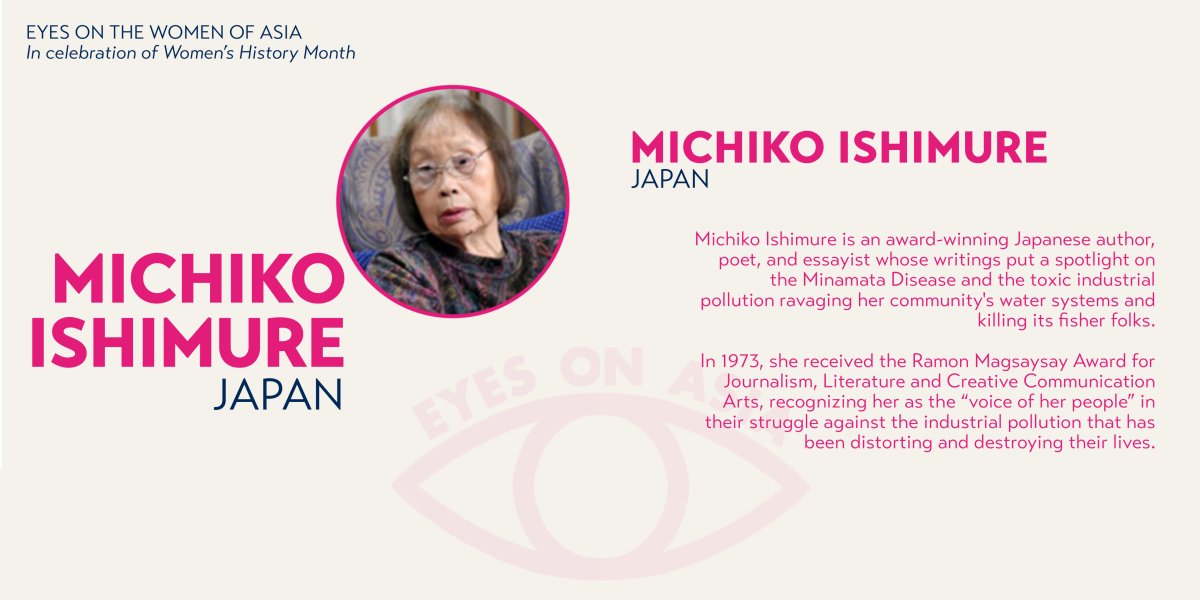 Michiko Ishimure was an award-winning Japanese author, poet, and essayist whose writings put a spotlight on the Minamata Disease and the toxic industrial pollution ravaging her community's water systems and killing its fisher folks.

Minamata was a naturally beautiful but poor fishing and farming center when one of Japan’s pioneer chemical companies established itself there in 1908. Growing into a great chemical complex before, and especially after, World War II, the company became the principal employer and dominant influence in local politics and government.

A puzzling “cat’s dance disease” spread through Minamata nearly a quarter century ago, causing frenzied cats to die or drown themselves. Soon after, people, especially fisher folk, were afflicted with a crippling and disfiguring disease that also was often convulsive and fatal.

No officials showed concern at the time with the exemption of the late Dr. Hajime Hosokawa of the chemical company’s hospital, who found that the “mysterious disease” was a central nervous system disorder resulting from eating fish contaminated by mercury waste discharged into Minamata Bay.

Ishimure wrote about the portrayals of their lives and agonizing illnesses within the context of a stratified society. It was first published in a small literary magazine in Kumamoto, Kyushu. When assembled into a book, Kukai Jodo Waga Minamata (Pure Land Poisoned Sea) in 1968, these poetic essays commanded national response.

Even with the resistance and protest of officials and unaffected residents whose livelihoods are dependent on the polluting company. Ishimure continued to write a collection of essays that was chronicled the life in Minamata and the disease that kills its peoples. Eventually, Japan’s Health and Welfare Ministry heard that lead to them to pursue corrective measures, though belatedly.

The Minamata tragedy is only a part of the ongoing struggle between the simple innocence of fishermen and farmers and the tyranny of mass industrialization that threatens to dehumanize society.

In 1973, she received the Ramon Magsaysay Award for Journalism, Literature and Creative Communication Arts, recognizing her as the “voice of her people” in their struggle against the industrial pollution that has been distorting and destroying their lives. 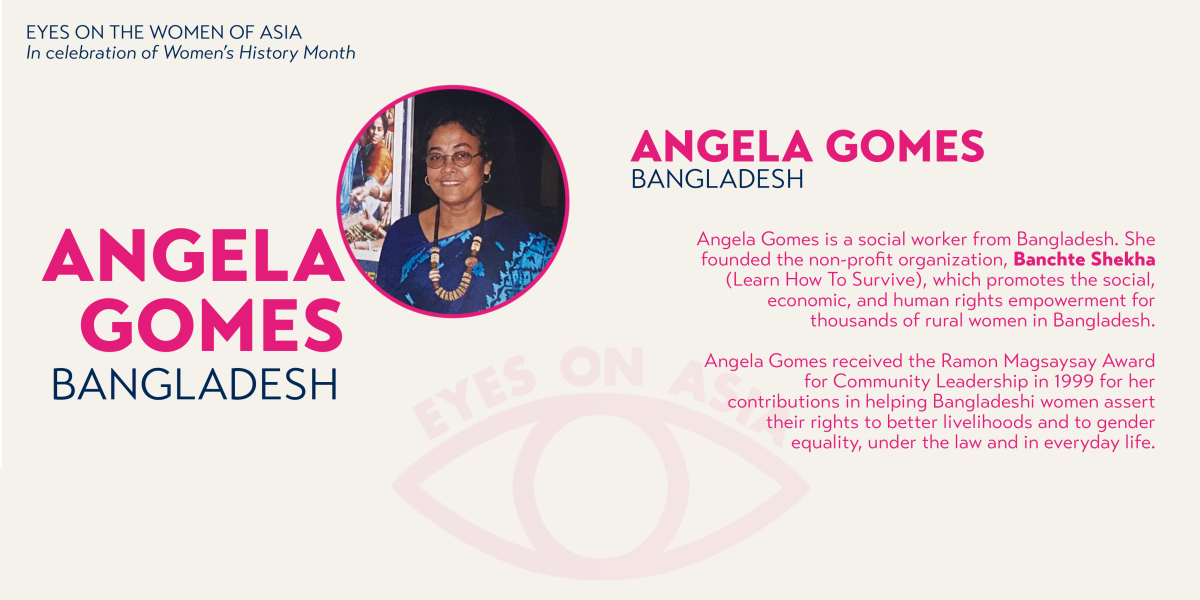 Angela Gomes is a social worker from Bangladesh. She founded the non-profit organization, Banchte Shekha (Learn How To Survive), which promotes the social, economic, and human rights empowerment for thousands of rural women in Bangladesh.

Banchte Shekha, founded by Gomes, is one of the largest women’s rural organizations in Bangladesh, spanning a 1.5-hectare training complex in Jessore. The organization provides skills training and support to poor rural women, many of whom experienced domestic violence, desertion, dowry abuse and rejection by their families.

Angela Gomes received the Ramon Magsaysay Award for Community Leadership in 1999 for her contributions in helping Bangladeshi women assert their rights to better livelihoods and to gender equality, under the law and in everyday life. 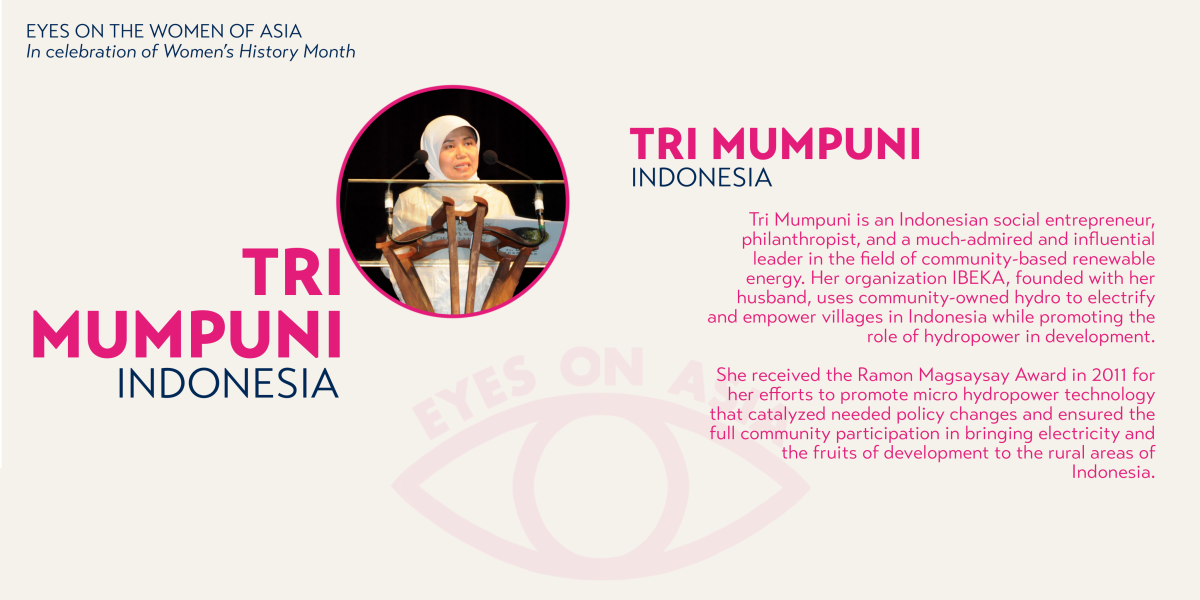 Tri Mumpuni is an Indonesian social entrepreneur, philanthropist, and a much-admired and influential leader in the field of community-based renewable energy.

Her organization IBEKA, founded with her husband, uses community-owned hydro to electrify and empower villages in Indonesia while promoting the role of hydropower in development.

Mumpuni struggled with restrictive state regulations, complex financing requirements, and the draining demands of social mobilization work. To meet the twin challenges of a social enterprise—remaining viable as a business without compromising its social mission—she had to focus all her energies on working at the level of the poorest communities, as well as with the highest government authorities.

Skill, creativity, and determination, however, have turned IBEKA into an outstanding Indonesian example of social entrepreneurship. From its base in Subang, West Java, IBEKA has built sixty micro hydropower plants, with capacities ranging from 5 kilowatts to 250 kilowatts, providing electricity to half a million people in rural Indonesia. Equally important, it has done this through a community-based development approach that goes beyond the technology to the socioeconomic empowerment of communities.

She received the Ramon Magsaysay Award in 2011 for her efforts to promote micro hydropower technology that catalyzed needed policy changes and ensured the full community participation in bringing electricity and the fruits of development to the rural areas of Indonesia. 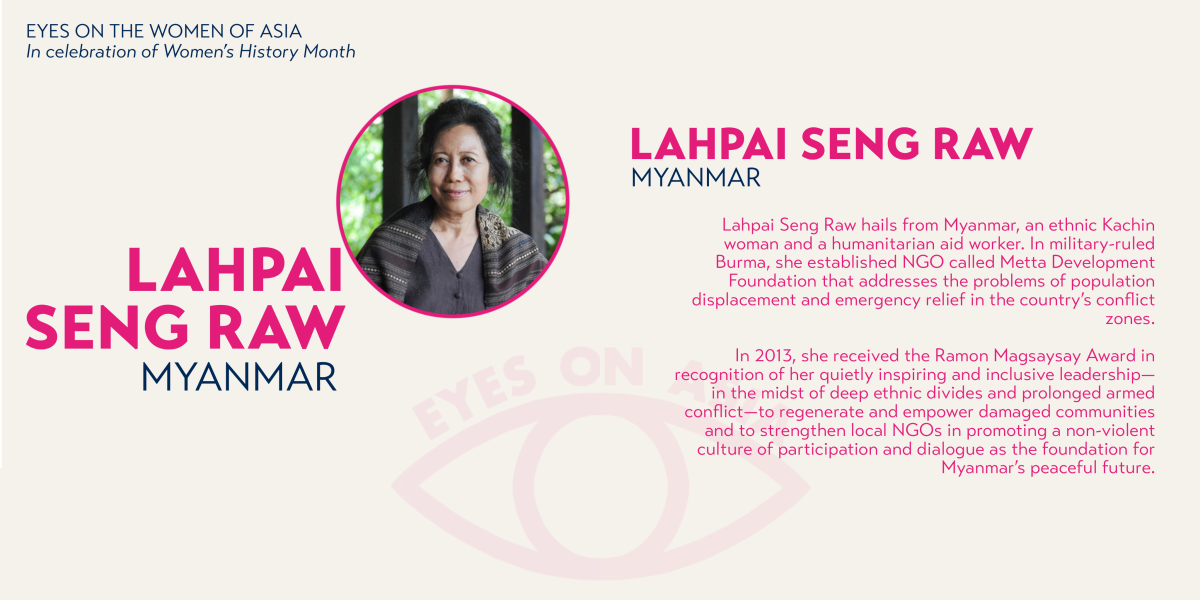 Lahpai Seng Raw from Myanmar, an ethnic Kachin woman and a humanitarian aid worker who established NGO called Metta Development Foundation that addresses the problems of population displacement and emergency relief in the country’s conflict zones

Metta Development Foundation was established in the time when the military ruled Burma with the aim to address the problems of population displacement and emergency relief in the country’s conflict zones, starting in northern Myanmar, where fighting between Kachin rebels and government forces had already displaced over seventy thousand people.

Metta has grown to be the largest NGO in Myanmar, with a staff of six hundred branches outside Yangon, and three research and training centers. Its various programs have reached over six hundred thousand people in 2,352 communities.

Working in a war-torn and socially fractured country, Seng Raw has shown both amazing courage and a unique ability to work with both government and rebels. She fully appreciates that in addressing conflict and instability, it is essential to build a foundation of stable, self-reliant communities. With this conviction, she has advocated an inclusive peace and reconciliation process in Myanmar. She has herself been an example of inclusiveness, and an embodiment of what metta means, “loving kindness.”

She received the Ramon Magsaysay Award in 2013 in recognition of her quietly inspiring and inclusive leadership—in the midst of deep ethnic divides and prolonged armed conflict—to regenerate and empower damaged communities and to strengthen local NGOs in promoting a non-violent culture of participation and dialogue as the foundation for Myanmar’s peaceful future. 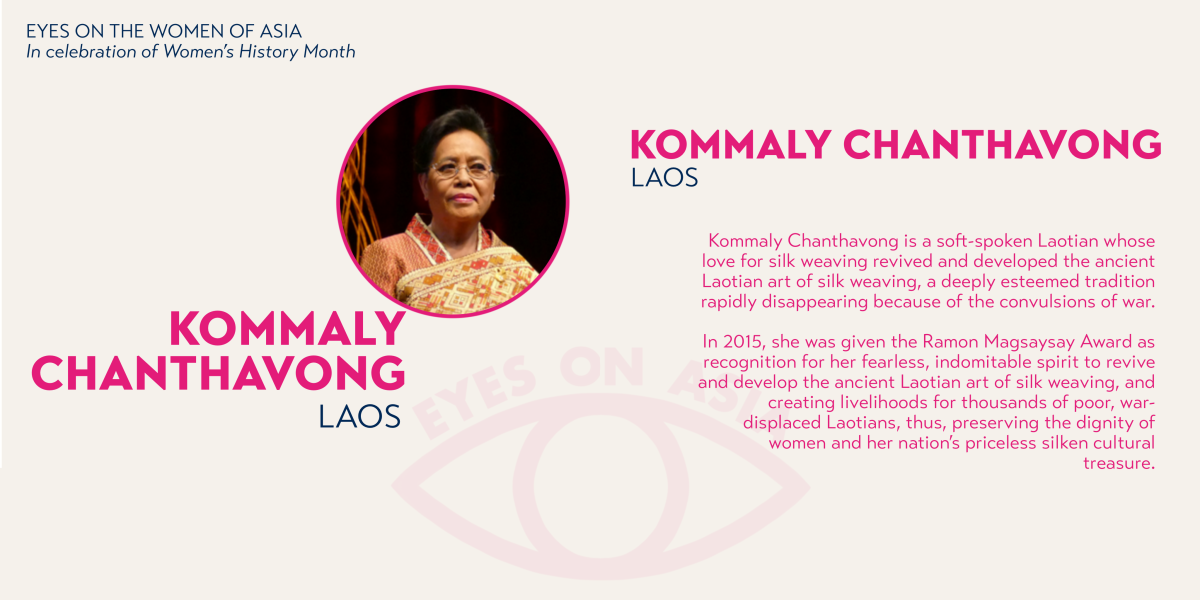 Kommaly Chanthavong, whose love for silk weaving, revived and developed the ancient Laotian art of silk weaving, a deeply esteemed tradition rapidly disappearing because of the convulsions of war.

In 1990 she started Camacrafts, a non-profit project that markets traditional Lao and Hmong handicrafts, working with hundreds of women in twenty villages.

Three years later, she created Mulberries, a social enterprise that initiates income-generating projects around traditional arts and crafts, including the production of mulberry tea, wine, and soap. More than two thousand villagers in five provinces have benefitted from this.

In 1993, the Lao Sericulture Company was launched to oversee and manage KOMMALY’s many initiatives. Her amazing work has covered the whole cycle of silk production, from growing mulberry trees, raising silkworms, creating natural dyes, to training, research, provision of tools, and local and international marketing of highly-prized handmade silk items.

Despite numerous adversities, she has traversed villages to personally teach and encourage weaving, and to patiently set up silk houses where young women and men can weave world-class products.

In 2015, she was given the Ramon Magsaysay Award as recognition for her fearless, indomitable spirit to revive and develop the ancient Laotian art of silk weaving, creating livelihoods for thousands of poor, war-displaced Laotians, thus, preserving the dignity of women and her nation’s priceless silken cultural treasure.

Eyes on the Women of Asia is a special series of Asia Society Philippines' signature program, Eyes on Asia that aims to highlight and promote understanding of an Asian country or region through its policy, culture, and arts - spanning discussions and activities to discover what is beyond the surface.

The Eyes on the Women of Asia series is made in partnership with Ramon Magsaysay Award Foundation to highlight the women of Asia whose works have helped shape a better future for all.