In A Nutshell: Defining Filipino Cuisine 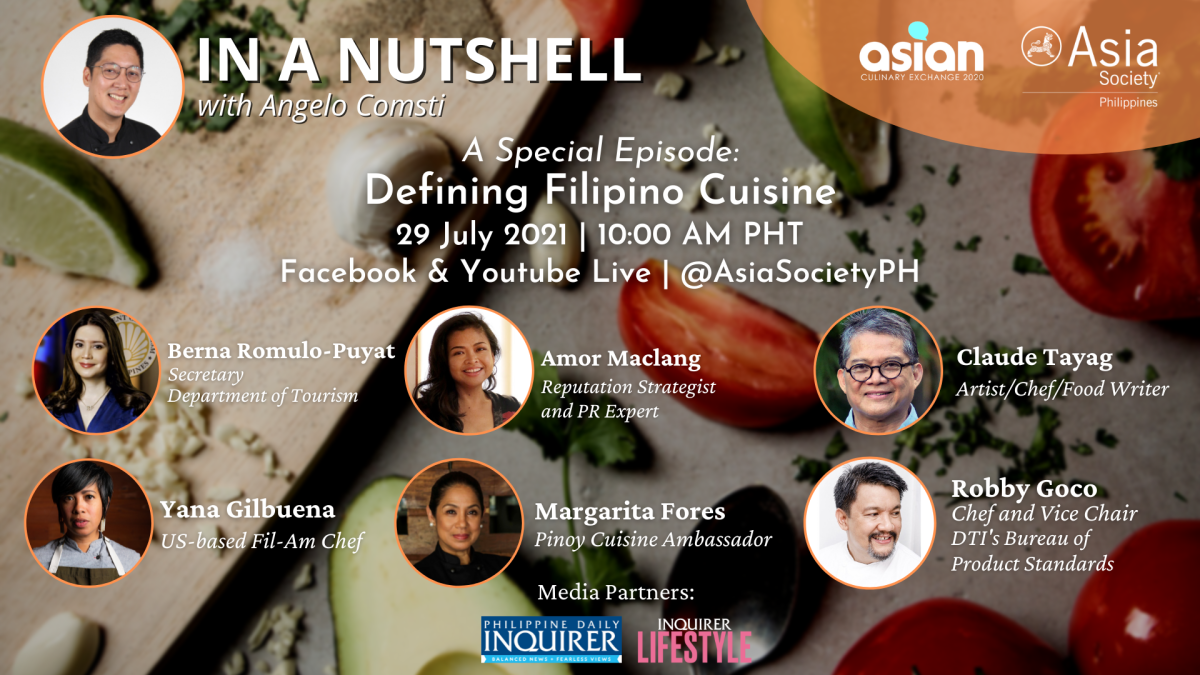 In this special episode of In A Nutshell series, Angelo will have a meaty discussion on the issue of recipe standardization and culinary promotions abroad involving key figures in food and beverage, trade, food tourism, and public relations.

Tune in this 29th of July, 10:00 A.M. and eavesdrop on this healthy conversation peppered with points-of-view from different sectors as we figure out how to best represent and advocate Filipino cuisine abroad.

Berna Romulo-Puyat is the Secretary of the Department of Tourism of the Philippines. She attended the University of the Philippines and pursued an undergraduate and a Masters degree in Economics. She was appointed as Undersecretary at the Department of Agriculture from 2007 to 2018 where she was designated to handle Special Concerns, Administration and Finance, and Agribusiness and Marketing.

Amor Maclang is a brand specialist and PR expert. She founded GeiserMaclang, which went on to become one the top public relations firms in the Philippines. An internationally awarded champion of marketing as a force for good, her projects demonstrate that you can hit your business goals while still doing good for the country. She is the first communications professional in the country to become trained in ISO 31000 Crisis Management.

Margarita Fores is a restaurateur, Filipino cuisine Ambassador and a co-author of the cookbook "Kulinarya, A Guidebook to Philippine Cuisine," a project of Asia Society Philippines that features favourite Philippine recipes developed for modern kitchens by six top Philippine chefs. She runs a variety of restaurants which serve varieties of Italian cuisine. In 2016, she was named Asia's Best Female Chef. She initially worked in catering, before launching the chain Cibo, as well as several individual restaurants.

Claude Tayag is a food writer and a co-author of the cookbook "Kulinarya, A Guidebook to Philippine Cuisine," a project of Asia Society Philippines that features favourite Philippine recipes developed for modern kitchens by six top Philippine chefs. He is best known for depicting scenes of impressionistic landscapes and scenes of Philippine folk festivals and religious imagery in his art. In recent years, he has written and been involved with Philippine gastronomy both as renowned chef and as food writer with his weekly column, Turo-Turo (Filipino for pinpoint) on The Philippine Star.

Yana Gilbuena is a US-based Filipino-American Chef. She is a Filipina immigrant cook, author, and traveler who has brought regional Filipino cuisine to all 50 American states and 11 other countries over the past six years through Salo Series, a succession of pop-up kamayan (eat-with-your-hands) dinners.

Robby Goco is a chef and Vice-Chair of DTI's Bureau of Product Standards. He was one of the successful Chef-Driven brands with 25 restaurants units to name. He has always been fascinated with food production. At an early age, he have already created his own pastry recipe that eventually became a hit to his family and friends.

Angelo Comsti is a chef, food writer and the author of bestselling cookbooks Home-Made for the Holidays, From Our Table to Yours, The Filipino Family Cookbook and Fuss-Free Filipino Food.