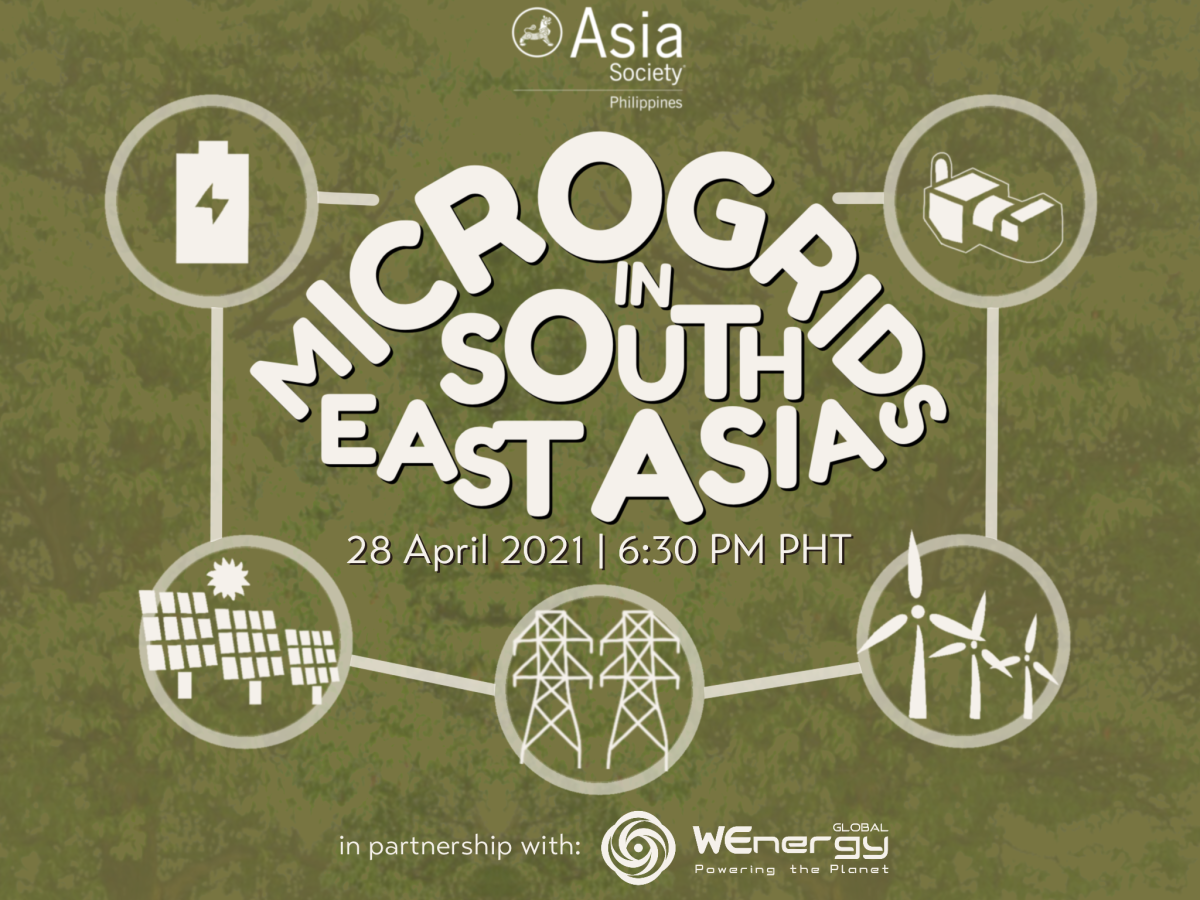 The Southeast Asian region is a budding great economy relying heavily on agriculture, natural resources, and forestry for livelihoods. However, this development is threatened by climate change with Southeast Asia being known as one of the world’s most climate disaster-prone regions. Additionally, the great leaps in economic growth and development the region has made comes with an increase in its demand for energy.

In Microgrids in Southeast Asia, we explore how microgrids can address both the threat of climate change and the growing energy needs of the region. What are microgrids? And can this be the answer to ASEAN’s Community Vision 2025 for a regional focus on environmental protection for now and the future – adapting and responding to climate change and green technology and development?

Atty. Josefina Patricia Magpale-Asirit earned a Bachelor of Laws degree from the University of the Philippines. Atty. Ina as she is more fondly called, has been in the public service for more than twenty years, having held office in all branches of the government – legislative, judiciary, and executive. These include both appointed and elected positions. She worked as Legislative Liaison Officer at the House of Representatives while pursuing her Bachelor of Laws degree. Then she became Branch Clerk of Court at a Regional Trial Court in a Northern Province of the Philippines. Thereafter, she was elected to a three-year term as Provincial Board Member for the 5th District in the Province of Cebu. In the executive department, she was posted as the Chief of Staff to the Secretary of the Department of Tourism for four years. Prior to her post as Commissioner of the Energy Regulatory Commission , she was the Chief of Staff to the Secretary of the Department of Energy (DOE) where she became one of the Undersecretaries of the same agency for three years. She handled the administration of the operational activities of the offices of the Electric Power Industry Management Bureau and the Energy Policy & Planning Bureau while concurrently being the DOE Chief of Staff.

Aside from being in government service, she was once a broadcaster for a daily public affairs program in the Visayas, a passion she has since taken up again in the time of Covid 19 after retiring from government service. She was also an educator and a former executive at a premier private college. She likewise had her stint as an entrepreneur and was an astute businesswoman having established a micro food retail business which gave economic opportunities to the womenfolk of the province she had settled in for some time. In her early years while pursuing a law degree, she was also working as an account executive in a leading beverage manufacturing industry.

The exemplary ideals she practiced in both the private sector and in government service continue in her personal endeavors as a “retired” public servant.

Quintin Jose V. Pastrana is the Head of Business Development of WEnergy Global and President of WEnergy Power Pilipinas Inc. Quintin also serves as the Chairman of WEnergy Global’s affiliates, Archipelago Renewables Corporation and Maharlika Clean Power Holdings, Inc. He completed his Master’s degrees in Business, International Relations, and Literature from the universities of Georgetown, Cambridge, and Oxford. He has championed an entrepreneurial focus on renewable energy, off-grid solutions, education, community empowerment, and sustainable development. He served as anchor and producer of ANC and Bloomberg TV Philippines. He was awarded as a US ASEAN Business Council Rising Star in 2010 for contributing to a stronger regional business environment. He is also Asia Society Young Leader and Starting Bloc Fellow, one of 100 leaders worldwide to join the Global Institute of Innovation at the London Business School.

Atty. Josine Alexandra Gamboa is an environmental and energy lawyer and public policy specialist, and law professor. She earned her Juris Doctor from the UP College of Law and her Masters in Laws from the University of California - Berkeley, where she has certificates of specialization in Environment and Energy Law, and in Public Law and Policy. She is currently a partner in YDL Law, as well as a fellow of Parabukas and part of the Board of Trustees of the Philippine Reef and Rainforest Conservation Foundation, Inc.

Hoon Tong has a Ph.D in Electrical Engineering, and Bachelors of Engineering (First-Class) from National University of Singapore.

*Be sure to check back on this page or through Asia Society Philippines' Facebook, Instragram, or Twitter (@AsiaSocietyPh) for more updates!