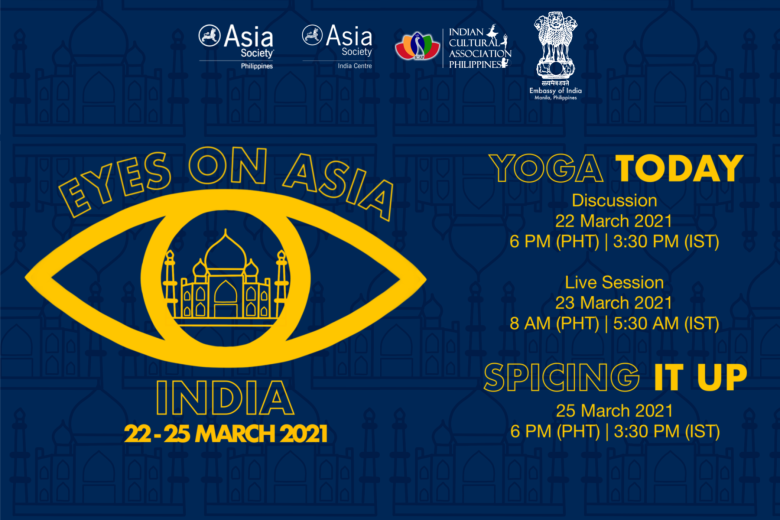 Eyes on India is the inaugural program of Asia Society Philippines' Eyes on Asia which aims to highlight and promote understanding of an Asian country through its policy, culture, and arts - spanning discussions and activities to discover beyond the surface.

Eyes on India is developed and produced in partnership and collaboration with the Asia Society India Centre, the Indian Cultural Association of the Philippines, and the Embassy of India, Manila.

Yoga has etched its own place in the world. People can now find Yoga classes almost anywhere, pervading more than fitness circles and digital spaces.

While more popularly known as an exercise, the interest for Yoga has brought the art at the center of a global cultural revolution as a holistic philosophy of life; and is coming to light as a beneficial ancient science that may be able to help society achieve ‘an integrated vision of human life’.

Catch Dr. Ishwar Basavaraddi, Director of Morarji Desai National Institute of Yoga, Ministry of AYUSH, Government of India as he discusses the roots of Yoga, its global evolution, and discover how it benefits more than the self.

Register and join us for a FREE, live yoga session!

Love yourself some butter chicken, tandoori, curry, or that dish that screams India? In Spicing It Up, we go beyond these well-known dishes to serve you the not-so-well-known (but equally flavor explosive!) dishes of India; and what these dishes have in common in the Philippines.

Together with Chef Thomas Zacharias and Chef Angelo Comsti, we join them on a scrumptious journey to the dishes we never had growing up!

He graduated top of his class at the Welcomgroup Graduate School of Hotel Administration in Manipal, Karnataka and received high honors at the prestigious Culinary Institute of America. The chef continued his journey working under Chef Eric Ripert at the celebrated three-star Michelin restaurant, La Berenardin in New York City andhelmed the Olive Bar and Kitchen in Mumbai under Chef Manu Chandra - all before he became the Executive Chef at the Bombay Canteen.

Chef Thomas constantly pushes boundaries of what Indian food is and is a passionate advocate of the Indian Food Movement. He has travelled and continues to travel the corners of India through his #ChefOnTheRoad series where he showcases Indian cuisine celebrating indigenous, local and seasonal ingredients, and creates memorable experiences.

Chef Angelo Comsti is a man with many pursuits. The inadvertent food ambassador combining his love for writing and food.

He pursued the culinary path in Le Cordon Bleu, Australia, opened his own restaurant, continued on to write Also Filipino: 75 Regional Dishes I Never Had Growing Up and four other bestselling cookbooks, and is the host of Asia Society Philippines' and Asian Culinary Exchange's In a Nutshell series.