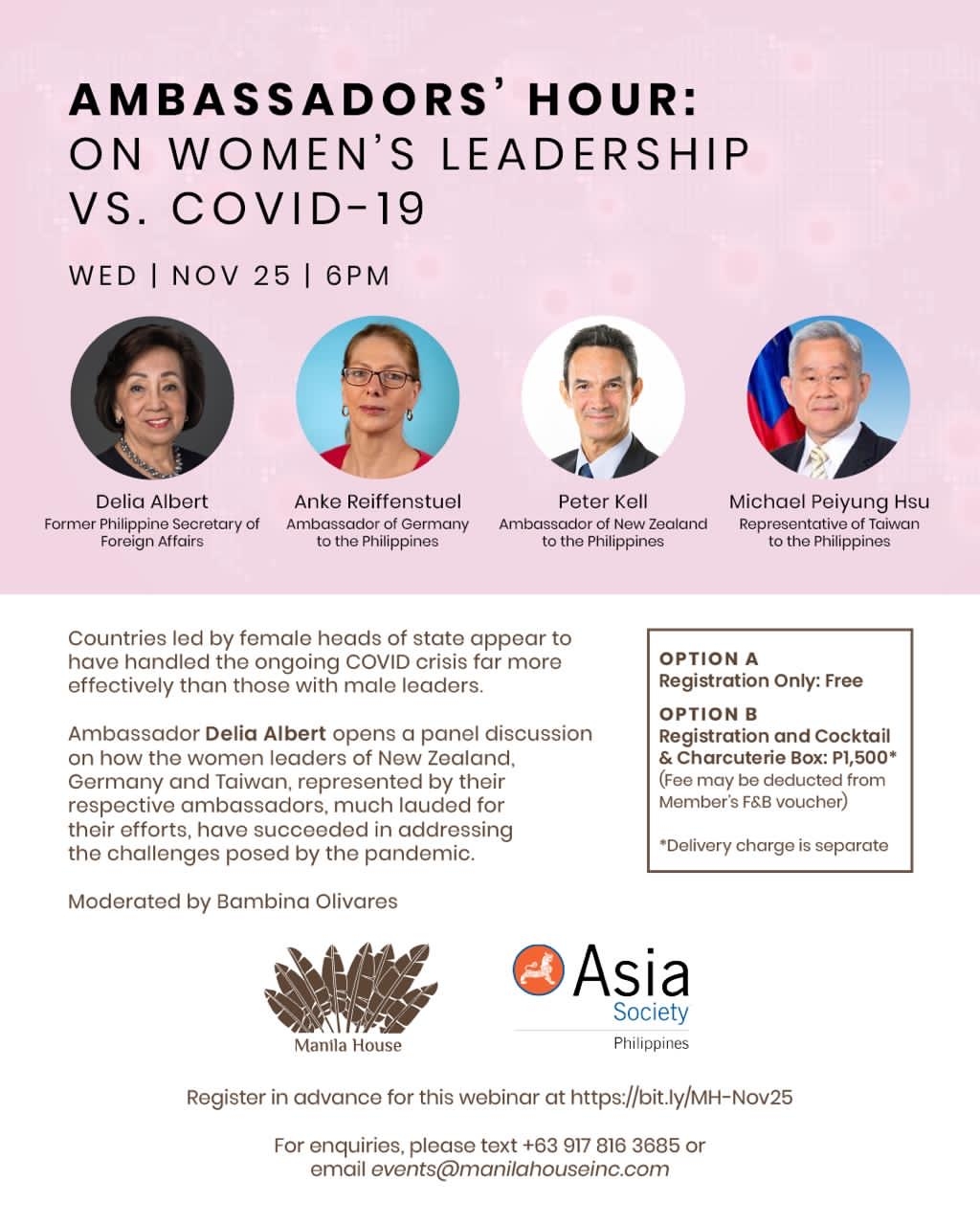 Asia Society Philippines, in partnership with Manila House, is hosting a webinar on “Ambassadors’ Hour: On Women’s Leadership vs. COVID-19” on 25 November, Wednesday, at 6 p.m. (PHT).

Joining us in this discussion are Ambassador Delia Albert, former Philippine Secretary of Foreign Affairs; Ambassador Anke Reiffenstuel, Embassy of the Federal Republic of Germany; and Ambassador Peter Kell, New Zealand Embassy, in further exploring the analysis published by the Centre for Economic Policy Research and the World Economic Forum, that female-led countries (like Germany and New Zealand) seem to stand out with their strategies and relative success in confronting the pandemic and the socioeconomic disruptions it has caused.

Also joining us through a pre-recorded video is Ambassador Michael Hsu from the Taipei Economic and Cultural Office in the Philippines, sharing his insights on the subject of women leadership and Taiwan’s experience in dealing with the pandemic.

She is the first woman career diplomat to become Secretary (Minister) of Foreign Affairs in Asia. She represented the Philippines in Switzerland, Romania, Hungary, the Federal Republic of Germany and the Commonwealth of Australia.

As Chair of the United Nations Security Council in 2004 she introduced the agenda “The Role of Civil Society in Post-Conflict Peacebuilding”. She attended the University of the Philippines, the Institute of International Studies in Geneva, the Diplomatic Institute in Salzburg, Boston University Overseas in Bonn, the J.F. Kennedy School of Government at Harvard University, among others.

The Philippine Women’s University conferred on her Doctor of Humanities, honoris causa for building a gender-fair society and was awarded “Most Distinguished Alumna of the University of the Philippines in 2012.

For her meritorious and exceptional service to the country, she was conferred the Presidential Order of Sikatuna rank of Datu and was given the title of “Bai-A-Rawatun sa Pilipinas” for assisting Muslim women in their search for peace and development. She received the Knight’s Commander’s Cross of the Order of Merit with Star (BundesVerdienstKreuz) from the Federal Republic of Germany and the single award to celebrate 70 years of Philippine-Australia relations in 2016 from the Australian government.

Ambassador Albert is a member of the advisory board of the Institute for Cultural Diplomacy in Berlin; and the Global Summit of Women. She is the founding chair of Business and Professional Women Philippines (Makati Chapter) Diwata: Women in Resource Development, ASEAN Society-Philippines, adviser to the Filipina CEOs Circle, and is a part of Asia Society Philippine’s board of advisors.

Her Excellency Anke Reiffenstuel, Ambassador at the German Embassy in Manila

Anke Reiffenstuel has worked in the diplomatic service since 1993; her postings included the German embassies in London, New Delhi, Cairo and Manila.

During her first year as German Ambassador in the Philippines she had the chance to get to know different places, where she met with Representatives and Officials to not only strengthen the bilateral relationship between both countries, but also to get to know better its people and their culture. Her journey lead her to Mindanao, Ilocos South & North, Cebu, Palau, Cavite and hopefully there will be more to come in the next couple of years.

His Excellency Peter Kell, New Zealand Ambassador to the Philippines

Peter Kell is the New Zealand Ambassador to the Philippines. He was the Deputy Head of Mission and Consul General at the New Zealand Embassy in Tokyo from February 2015 to April 2019 and Acting Ambassador from April to July 2019. Before that, he served in Wellington for five years in the Human Resources Division and Chief Executive’s Office before undertaking a secondment to the Office of the Minister of Foreign Affairs. His last role in Wellington was as Principal Adviser to the Deputy Secretary of the Americas and Asia Group. He has also served in Honiara, London and twice before in Tokyo. He is a graduate of Kyoto University and Victoria University of Wellington. Before taking up his assignment in Manila, he spent three months on intensive Filipino language training.

His Excellency Michael Peiyung Hsu, Representative of Taipei Economic and Cultural Office in the Philippines

Michael Hsu is the current Representative of the Taipei Economic and Cultural Office in the Philppines since 2018. He has held two other positions in TECO Philippines as the Deputy Representative from 2009 to 2011 and the Deputy Director from 2004 to 2007.

From June 2015 to 2018, he was the Director General of the Department of International Organizations, MOFA. Prior to that, he was he was the Representative of the Taipei Liaison Office in the Republic of South Africa for four years.