An In A Nutshell Special Episode 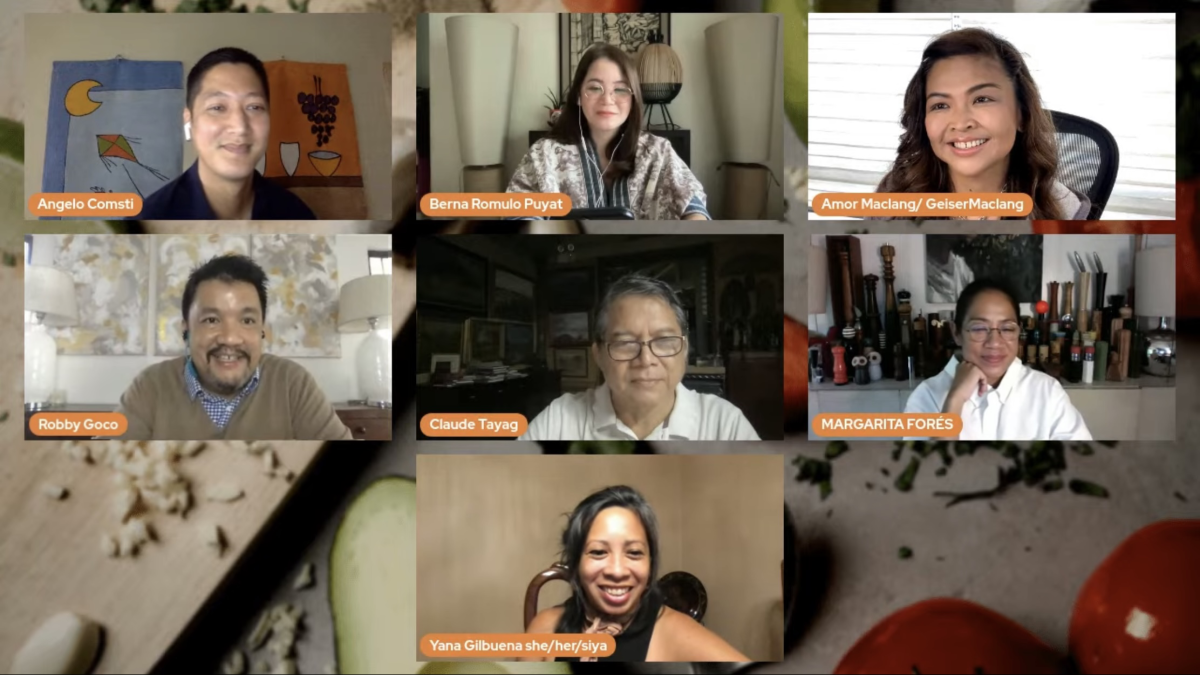 29 July 2021—Early in July, the Department of Trade and Industry - Bureau of Philippine Standards (DTI-BPS) said in a press statement that it has formed the BPS/TC 92, a technical committee aimed at developing Philippine National Standards (PNS) for Filipino dishes (Source: DTI, July 2021). The news became a topic of conversation as many people aired their views about the “standardization” of adobo.

In light of this, Asia Society Philippines, together with Asian Culinary Exchange, mounted a special episode of In A Nutshell last 29 July 2021 hosted by Angelo Comsti: streamed live on AS PH’s Facebook page and Youtube channel.

In A Nutshell, is a web series produced in 2020 by Asia Society PH, together with Asian Culinary Exchange, where Angelo Comsti sits down with friends globally to discuss the different facets of the food and beverage industry—from chefs and restaurateurs to cookbook authors and influencers.

Chef Robby Goco quickly set the record straight: “The standards the group is trying to set was the most basic recipe: it’s the protein, the local endemic vinegar, garlic, salt, pepper. Whatever you can add to that, bahala ka na. It’s about letting the world know and differentiating adobo from paksiw, humba, or asado.” Goco also likened the “standardization” to cooking the five mother sauces. “Nobody anymore cooks the basic bechamel or the basic espagnole, but up to now, everyone is taught about the basic mother sauces. It’s really to just go down to the basics, to having a baseline. So that at least when they teach anyone anywhere in the world, for instance to a non-Filipino national, they will know the basic Filipino Adobo.” He also added that it is about promoting local or Philippine vinegar abroad, “When chefs abroad make Filipino adobo, they should look for Philippine vinegar, not simply use balsamic or sherry or even apple cider vinegar, to make it Filipino adobo.”

From this, the others shared their opinions about the controversial matter. Chef Gaita Fores remarked, “You’re right about trying to find Filipino vinegar to use to make it, so that people abroad can do it as close as possible to the Filipino model. It’s really about the effort to get our cuisine out there and then add the message that because of regionality, there are many varieties. So I think that there’s really no reason to be angry, and we should rather appreciate what the DTI is trying to do. I think that’s exactly how you get the cuisine out there globally.” Chef Yana Gilbuena also shared, “It’s good to have the foundations, and I’ve always said that about Filipino cuisine, about understanding the flavor profiles. Once you understand the foundation of what the dishes are, then you can jazz it up however you want. I agree with having that baseline, that foundation, but also being able to celebrate that regionality, specificity, and diversity that we like to embrace as Filipinos.” Goco asserted, “It’s really to celebrate diversity and the different ways of cooking adobo, so long as all of them have the basic ingredients.”

Sec. Berna Romulo-Puyat similarly chimed in with her thoughts on the matter: “I think the operative word is [DTI] did not actually say standardize. When I talked to DTI Sec. Lopez, he said that nobody said standardize. I think that was the bone of contention for the public. What should be made clearer is that it is more to differentiate Filipino adobo from the likes of Mexican adobo.” Amor Maclang concurred, “The ‘fault,’ for lack of a better word, was the intent was not communicated right. Dapat siguro sinabi (What should have been said) what the intent is first: to create a baseline so you can all go crazy and innovate.”

The panel was also asked by an audience member about whether it would be practical to serve Filipino cuisine traditionally or in a modern way, especially in places where the Filipino cuisine is still underrepresented. Fores remarked, “Traditionally muna (first), then you can show the innovations after, especially in places where they still don’t know much about our food. We need to show the basics first so non-Filipinos understand the psyche behind the cuisine. Doing the traditional one first is probably the better way to get your food in the door.”

Chef Claude Tayag also added, “I’ve heard so many comments about customers in Flipino restaurants abroad saying something like, ‘Oh it’s not like what my grandmother/mother cooks.’ Their idea of what Filipino cuisine should be is frozen in a time frame of, say, 30 years ago when they left the Philippines. My point is, every generation creates their own tradition. Why not present it in a modern way? Make it contemporary and relevant, as long as you keep true to the taste.”

Going back to the issue at hand, Maclang remarked, “The ironic thing of what happened is that with all of this cancelling culture, we are actually cancelling innovation. Now all of a sudden, if there are chefs who want to document the secret recipes, in their secret kitchens, hindi na (not anymore).” In relation to that, Fores brought up how the Kulinarya: A Guidebook to Philippine Cuisine, published by Asia Society Philippines and Anvil Publishing in 2008, became a foundation which allows for the diversification of Filipino cuisine. “It’s not just about the recipes. What the book morphed into is how it also explains why our food is regional. It’s actually celebrating its originality. Look at the advancement of Filipino cuisine in the past decade. It was precisely because we all decided to get together and not fight. We first chose the basics of our cuisine, in order to make headway and explain how diverse our food is later.”

Moving forward, Fores also said, “Another important thing is PPP: Public-Private Partnerships. Private sector and government have to get together. That’s how this is all happening. The Kulinarya book is a DOT project, and if the government didn’t join us to do this, it would not be where it is today. The agencies of Agriculture (DA), Tourism (DOT), Trade and Industry (DTI) are the 3 most important to actually get our cuisine out there.” Sec. Romulo-Puyat seconded this by emphasizing that the DOT will work on not only resolving the controversy behind their efforts, but to fulfill their intended objectives in the first place. “If it helps generate awareness of our country’s food, it will always be welcome. We always want to promote local cuisine and local ingredients.” She likewise emphasized the importance of other government agencies in promoting Filipino food, stating, “I think the Department of Foreign Affairs (DFA) also really plays a large role with their presence around the world. The ambassadors really want to push Filipino food. I think they should also be there, syempre because they handle the local ingredients.”

Maclang, in addition, made an interesting request and suggestion to Chef Goco: “Rather than this “standardizing,” can we document living traditions? Let’s do it now while there are living treasures in the culinary field. The problem with Filipinos in general is we don’t document and write down the amazing things we do, [whether in the kitchen or elsewhere].” Such statement, which upon first hearing, may only sound like an interesting quip, actually shows the direction where Filipinos can take their attention and efforts. While much focus has been given to the controversial nature of the issue at hand, more emphasis can be given to the enriching of our culture through collaborative efforts between the government and its people, and not simply these select individuals.

The panel agreed that while the DTI’s efforts towards having a set of PNS are noble, it must make clear to the public what its intentions are: to establish a baseline and to document our Philippine culture, celebrating an inherent diversity to unify, instead of divide.

In a Nutshell, creating the baseline for the recipes is how it defines Filipino cuisine on the international arena. As Mr. Comsti said in his opening spiel, “They will serve as the common denominators among all the known ways of cooking the dishes to help preserve the country’s cultural identity, despite the variations made to it.”

Watch the full video of the webinar below:

Be part of the conversation and send in your thoughts through the comments section!

Inquirer Lifestyle | What makes it Filipino: Settling the adobo war

Kulinarya: A Guidebook to Philippine Cuisine