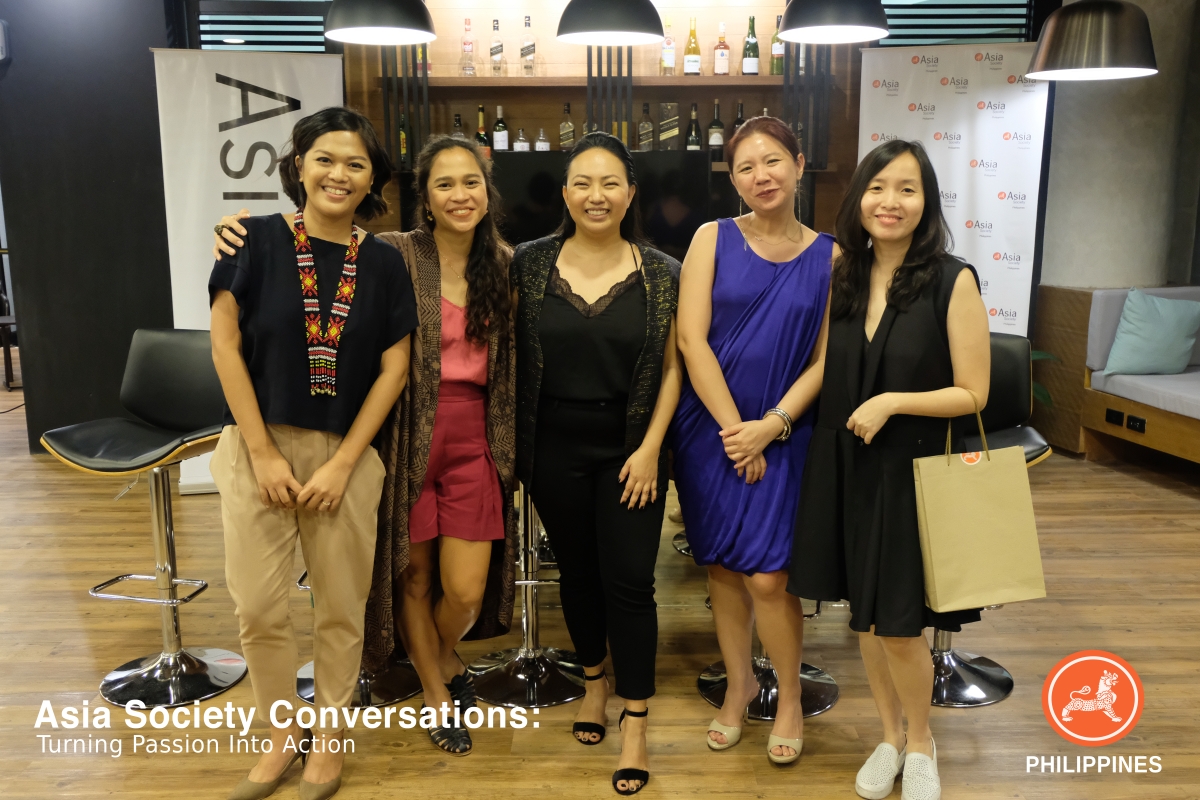 A Night of Women Empowering Women

Last 27 March 2019, Asia Society Philippines, in partnership with Acceler8, held another edition of its monthly series, Asia Society Conversations, in lieu with Women’s Day this March, entitled Turning Passion into Action. Asia Society gathered five women of different backgrounds within the creative industry. The conversation was moderated by Krista Garcia, a digital marketing consultant and the current Content and Strategy Lead for Ideasync. She was joined by Kakki Teodoro, a theatre actor known for her roles in Himala: Isang Musikal, Ang Huling El Bimbo, and Every Brilliant Thing; Ria Lu, the Executive Director of the Game Developers’ Association of the Philippines; Reese Fernandez-Ruiz, the President and Founding Partner of the fashion brand, Rags2Riches Inc. and the market and media platform, Things That Matter; and Ice Idanan, a film director of Sakaling Hindi Makarating (The Amazing Journey of the Letters) and the upcoming movie under Regal Entertainment, STRANDED.

The guests shared their humble beginnings, the stereotypes they have faced along the way, and advices to people who wished to turn their passion into action.

Kakki, on the other hand, since childhood, wanted to be a performer. She was a part of the Repertory Philippines and on college, the Ateneo Blue Repertory; but it was only after an internship in an advertising company that she realized how much she enjoyed performing on stage more than a corporate job.

Ria Lu shared that she started in game designing from playing one of the Final Fantasy games with her friends. It was the joy of seeing her friends’ expressions to the game, why she wanted to pursue it.

Reese did not consider herself a ‘creative’ before because she felt that she did not fit the bill of what was considered a ‘creative.’ Reese shared that it was an accumulation of her experiences that lead her to where she is now. Rags2Riches was a way to solve problems that also gives opportunities to other people, especially the under-privileged people.

Stereotypes within the Industries

Kakki, coming from a performance arts background, that all theatre actors come from wealthy families. This is because theatre does not pay well, while this may be true, it is not true that they all come from a rich background. Some actors in order to make ends meet also have business on the side like herself, with DietDiva.

Ice shared an anecdote that on her first work as a cinematographer outside of independent films, she was treated like she did not know anything. She had to work her way in, especially in a very male dominated industry, and demonstrate to these people that she knows what she is doing by doing the work herself.

Ria shares that the stereotype in game design is more on perception that girls does not equal to game design but guys do. This is because girls’ jobs are typically associated to sensible jobs and games are known to being ‘sensible.’ Hence, it was not expected of girls to be part of the industry.

From Passion to Action

But they also share that in pursuing your passion, you have to remember to keep it authentic. People would respond more to you, whether it is in film, a play, a product, or a game, you have to keep it genuine because your audience or consumers will know. Another important thing is the ‘Other.’ These are the people at the receiving end—your audience and consumers. They are the people whose feedbacks matter the most. Last important thing is to know the different aspects of business. As a creative, you’re less likely to know about the financial side of the business. However, this should not stop you to learn and figure out how to build a business from ground up.

As much as you work hard for your dreams, our panelists, having their fair share of the ‘burnt out’ feeling, also reminded people that rest is part of the process. It is important to take time for yourself and have a break. They also pointed out that asking for help is also okay when things get too overwhelming.

All the guests took time to give some parting advice to people wishing to pursue passion in their same fields.  Reese says, “explore whatever you like” She also advices the audience to do what you live especially if it is something that you are not expected to do.

Ria says, “Go for it.” She also shares that the gaming industry needs more women to join them and that women are very welcome.

Kakki shares the honest struggle of women in theatre, “it’s going to be hard because there’s a lot of competition.” But she also shares that if it is truly your passion, to go for it and be part of the Philippine theatre industry.

Ice tells girls and women if they want to be a film director, “Be one. Don’t let anyone tell you that you can’t do it.”

Lastly, Krista, coming from a writing background, shares to the audience to do their research. Whether it be for a story, or for building a business, research is important.