Peter Sellars: 'Nixon in China' and the Power of Music | Asia Society Skip to main content

Peter Sellars: 'Nixon in China' and the Power of Music

Director emphasizes importance of the arts in US-China relations 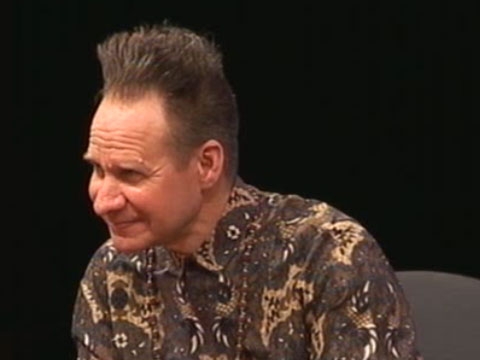 NEW YORK, January 11, 2011 - Music can be a powerful democratic force, able to push boundaries in authoritarian societies, according to theatrical director Peter Sellars.

Pointing to 18th-century Europe and czarist Russia as examples, Sellars said the "irresistible" power of music has been responsible for social and even political change.

"Music doesn't soften the message, it deepens it," Sellars said during a conversation here with Orville Schell, Director of Asia Society's Center on US-China Relations.

"Great music, you are somewhat helpless in front of. It is disarming. You have to have your guard sentries stand down while the army invades. You go with it. It moves you. And it touches some idealistic core of your being where even the greatest cynic has not given up hope. That's why we listen to music."

Sellars, who on February 2 makes his Metropolitan Opera directorial debut with John Adam's groundbreaking work, Nixon in China, says he is proud that his work, which includes sexually explicit (and, Sellars notes, historically accurate) scenes involving Chairman Mao, has thus far been banned in China.

Although he would love for his work to some day be shown in China, he refuses to remove the objectionable scenes.

"To me, culture remains one of the last tests of the Chinese government," Sellars said. "The government can show itself as willing to go quite far in business, in certain political things, ecologically. This government—you can talk to them and they are quite far-reaching and in some ways quite visionary at the moment. It's very impressive. But the soft spot, the vulnerable spot, the pinched nerve continues to be culture."

Sellars has witnessed firsthand the plethora of changes China has undergone in recent decades, having visited the country well before Deng Xiaoping's reforms began to transform the country.

"It was clear from your first day on Chinese soil that you have no idea what's going on here. Your illusion that you have control over anything disappears very quickly. The sheer scale is overwhelming—coming from America we think we're used to large scale, but you go to China and the scale is just so much vaster. That was shocking."

Sellars said that Nixon in China is about "what people ask themselves before they die."

"At the end of the day, after all the hoopla and press conferences and so on, what are we left with? What are the deeper reckonings? What are the deeper aspirations that remain in front of us for next generations? What did we accomplish? How much of what we did was good?"