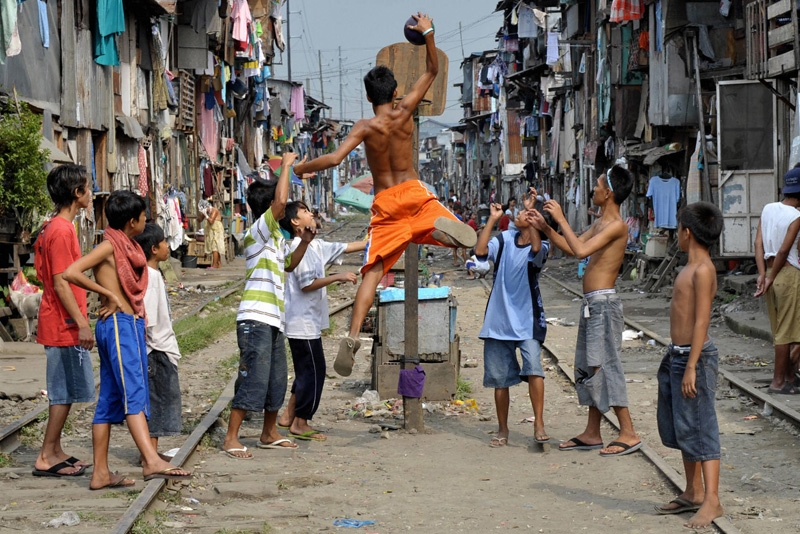 Though the book centers on the sport within the culture of the Philippines, Bartholomew finds that the two subjects are inextricably intertwined. His personal experiences—traveling with a popular Philippine Basketball Association (PBA) team, being mobbed by fans in remote rest stops, and debuting as a Filipino soap opera star—give the reader a unique perspective on a culture that is as vibrant and captivating as a PBA championship game.

Bartholomew, who says that "his heart remains in the Philippines," recently shared his insights into Filipino basketball culture with Asia Society Online.

ASIA SOCIETY ONLINE: You knew you wanted to write about basketball in the Philippines before you left for your fellowship. Where did the motivation for this project come from?

RAFE BARTHOLOMEW: I almost stumbled into it. I had played basketball in high school and at a club level in college so obviously I was already interested in the sport, but I was reading this book called Big Game, Small World by Sports Illustrator writer Alexander Wolff. He traveled all around the world sort of like a basketball travel log and wrote about the sport in probably 15-20 countries. There was one chapter in there about the Philippines and that may have been the first thing I had read about the Philippines longer than a couple of pages long. But the stuff he wrote about really inspired me. It was stuff like kids playing basketball in their flip-flops, or in their bare feet, and people building their own basketball courts out of whatever materials they could get their hands on. It was this sort of passion—that they would play the sport by any means necessary—that made me want to go out there and see it for myself.

RB: Once you get out there and once you start following the basketball culture it's too much a part of everything else that is going on with the country to just focus on basketball. I think the reason why it is so embedded in people's lives there is it was the first team sport that was widely accessible and popular. It caught on because early in Filipino basketball history, and also in everyone's basketball history, they were very good at it. Basketball was introduced there by the US colonial government in 1910. They made it part of the physical education curriculum in the public school system. They built playgrounds, they built the YMCA in Manila and so in that way, the game was promoted.

One of the interesting things is that they [the US government] tried harder to promote baseball because if you think about what period it was, in the 1920s and '30s, baseball was really thought of as the national pastime. Basketball didn't really come into its own until probably the '60s or '70s, but in the Philippines, it was already huge. In the first Olympics to have basketball as a medal event in 1936, the Philippines only lost one game and it was to the United States. They beat everybody else and it was only because of a scheduling quirk that they didn't get a medal.

Those early successes coincided with the time when idea of the Philippines as a nation was sort of coming into its own also. The Philippine-run part of the Philippine government was starting to try and convince people that they were part of this larger nation. Not "I'm Cebuano" or "I'm Ilocano" or "I'm Ilonggo"—not just part of their regional identity. They were trying to convince people that they were Filipino, and basketball was one of the things that people had in common across different geographical regions and linguistic regions. There are more than 100 distinct languages spoken in the country, so it is still a challenge to get people to break out of the sort of regional mindset. Basketball, and probably Catholicism, are two of the things that are most successful at crossing all of those boundaries.

ASIA SOCIETY ONLINE: Your book combines your personal experience on the court with more historical information on how the game originated and has grown in the Philippines. What was it like doing research for this book? How important was your first-hand experience to understanding the role of basketball in the lives of Filipinos?

RB: There was the library research and the interviews that I conducted with former players and current players and coaches, so there is that side of the research, and then there was a lot of the personal stuff. The personal stuff is in there for a few reasons. One, from a publishing point of view, it sort of anchors the book with a character that might be more easily relatable to an American reader. It sort of turns me into a guide for this alternative basketball universe, so there is a practical sort of storytelling reason for it.

The other reason is because too many entertaining and revealing things happened to me or with me playing a role. For instance, that scene where people sort of cornered me and forced me to sign autographs as a PBA player, it's sort of a thing where it says a lot about the sort of basketball mania that sets over for fans there and it is something that I may not have seen if I hadn't lived it in that way. And so the personal side, research-wise, it sort of grounds the book in a level of understanding of Filipino culture that I couldn't have gotten strictly through interviews and academic research.

I think the tone and my perspective on the subject is based on the fact that I lived there for three years and felt like I was writing for other people who know the country well and I was doing my best to do that. I didn't want to sound like a detached observer that was lecturing about the country. I don't really like that tone. Often I find that tone sort of presumptuous when written by foreigners, no matter how long they get to live there.

ASIA SOCIETY ONLINE: One reviewer describes your book as "the sort of hymn to a country that's more gushing in praise than anything a native could hope to produce." What caused you to fall in love with the Philippines? Would you describe it that way?

RB: Certainly. I tell people that by the time I was writing it, I was thinking of the book as sort of a love letter to the country. Of course, it was directed to the basketball culture there, but more than that, it was a much more generalized thing to the whole country, the whole shebang. For me, the reason I enjoyed living there so much was that even though I got to a point where I felt very at home and comfortable in the country, you can't avoid having a foreign perspective on things. To me, that meant feeling like I was constantly learning something new. It's probably true that if I looked harder here in New York, where I'm from, or somewhere else in the states, I could have a similar experience. I'm sure I could find something new about the city here every day but because I'm from here I don't look at it through the same eyes. When I was living in the Philippines everything I saw was like a new story that I wanted to tell or I wanted to learn more about. I could just walk through my neighborhood and see 10 new things that I wanted to learn about.

ASIA SOCIETY ONLINE: You mention in your book how a Filipino basketball player's style differs from American style, citing both the height factors and how a lot of Filipinos grow up playing in makeshift courts. How else is playing pick-up basketball in the Philippines different from playing in the US?

RB: Personally, as someone who loves playing basketball, one thing that I adored about the Philippines was that you could play in a good, fun game with guys who were active and in shape and certainly knew how to play, you know might not be fantastic players, but you could have a competitive fun game almost anywhere at any time. Basically if you bring a ball and start dribbling it, people are going to hear it and show up. More often than not, you will have a good enough game going to have some fun. It's harder to find good games here in the states than it should be.

Playing with people was also pretty instrumental for me being able to describe some of the unique aspects of the Filipino style of play. That comes from having to try and guard it myself and being able to see the moves that come from their style as opposed to what you're used to seeing as an American basketball player.

ASIA SOCIETY ONLINE: How would you describe your book's intended audience? Who did you feel like you were writing for?

RB: The way I've always thought of the book has been narrative non-fiction, hopefully for a general audience. Even though I was always interested in sports, I never wanted to be a sports writer. That was something that I was just never interested in because when you think of sports writers you think of covering the game, writing columns about it, and analyzing the game. That is all stuff I like to do, but more like when I'm talking with my friends. As a writer, I have always been more interested in doing narrative journalism, writing about people's lives and cultures and things like that. So this was sort of like a perfect marriage of my interests.

I always thought that the role basketball plays in Philippine society is interesting enough to appeal to anyone, so I hope there is some general audience for it. Of course I expect that people who like basketball will be interested in it, I think, because at least to an American audience, it exposes them to a side of the game that they probably haven't seen in a place that they probably don't know a whole lot about.

Also I expect that Philippine audience whether it be Filipinos living in the Philippines or whether it be the diaspora of overseas workers and people who have emigrated to the United States or Canada or Europe. Obviously, I am aware that they exist and figure that they would have an above average interest in the book or more of a reason to pick it up than someone walking through a bookstore that has never heard of the Philippines.

So I don't know if I wrote the book for any one audience in particular. I know I was more conscious of how Filipino readers would respond to what I was writing because I figured they're the people who know this culture better than anyone else, better than I do and if what I was writing seemed true to them, then that would be the best measure of success.

ASIA SOCIETY ONLINE: What has the feedback been like from your Filipino readers?

RB: I've seen a handful of reviews, I've read Philippine Star, Philippine Daily Inquirer, GMA news, and they have all been very positive. I have heard from the guys who are on the team that I followed, other people in the PBA, and so far it's been very, very positive which I'm happy about. I wasn't expecting to totally disappoint them, of course, but you never know. That is what I'm most proud of-that the people who know about Philippine basketball and culture are reading it and saying, ‘this guy didn't misrepresent us.'