The Honorable Kevin Rudd Speaks on the U.S.-China Trade War 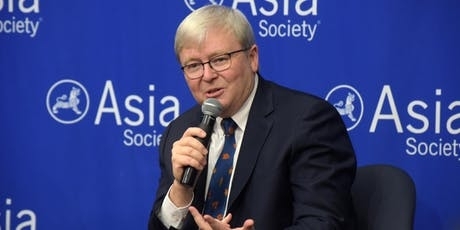 On November 7, 2019, Hon. Kevin Rudd, former prime minister of Australia; President of the Asia Society Policy Institute think- and do-tank; and a leading authority on China’s domestic political economy, its international relations, and global trade, joined Asia Society Northern California for a discussion on future directions of the ongoing U.S.-China trade war and the risks of general economic decoupling.

About the Honorable Kevin Rudd

The Honorable Kevin Rudd served as Australia’s 26th Prime Minister (2007-2010, 2013) and as Foreign Minister (2010- 2012). He led Australia’s response during the Global Financial Crisis—the only major developed economy not to go into recession—and co-founded the G20. Mr. Rudd joined the Asia Society Policy Institute in New York as its inaugural President in January 2015. He serves as Chair of both the International Peace Institute and Sanitation and Water for All. He is a Senior Fellow at Harvard University’s John F. Kennedy School of Government, a Distinguished Fellow at Chatham House and the Paulson Institute, and a Distinguished Statesman with the Center for Strategic and International Studies. Mr. Rudd is a member of the Comprehensive Nuclear Test-Ban Treaty Organization’s Group of Eminent Persons. He serves on the International Advisory Board of the Schwarzman Scholars program at Tsinghua University, and is an Honorary Professor at Peking University. Mr. Rudd is proficient in Mandarin Chinese. He also remains actively engaged in indigenous reconciliation.