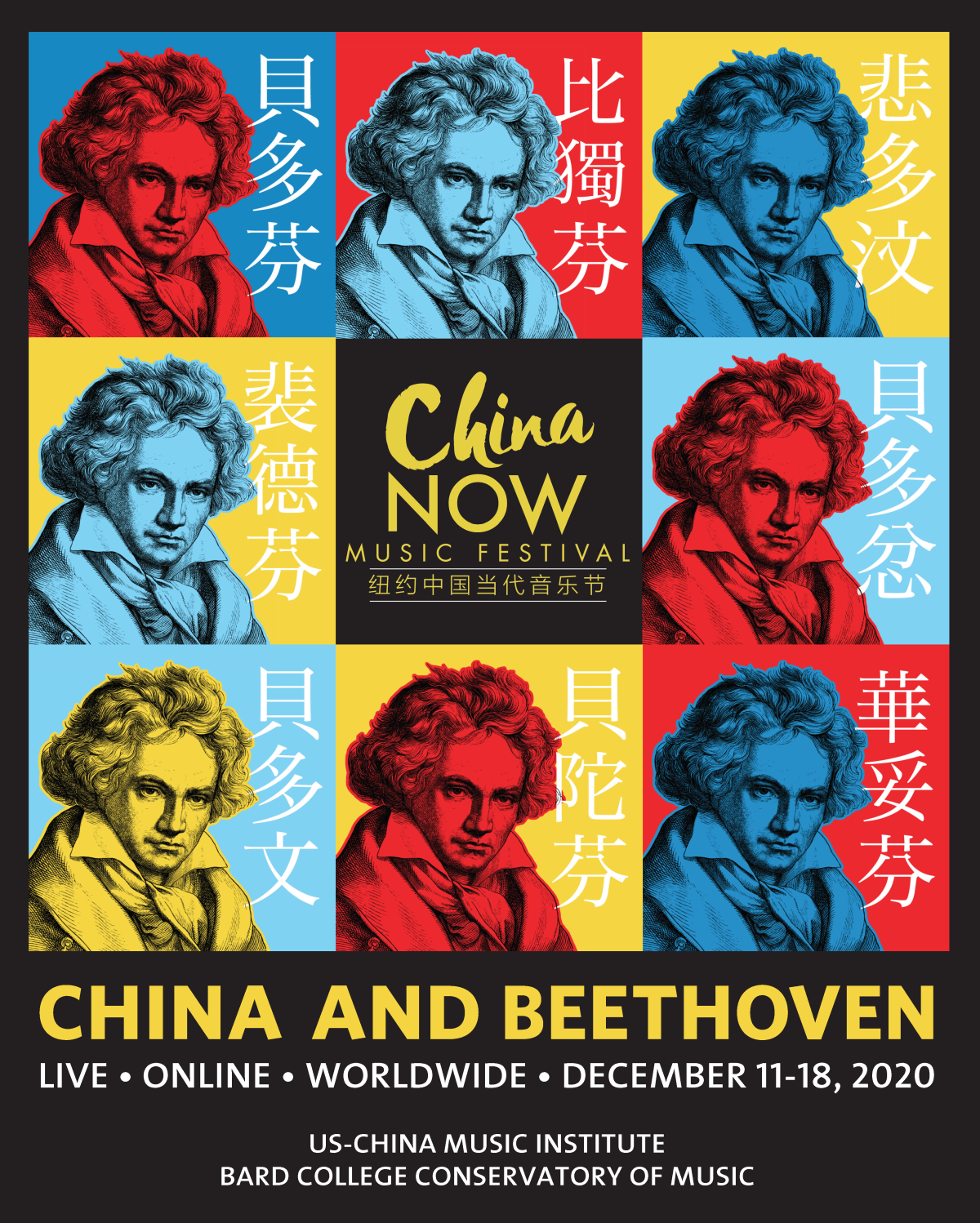 The year 2020 marks the 250th anniversary of Beethoven’s birth. Celebratory events have been planned all around the world, and nowhere more so than in China, where classical music enjoys a huge following among audiences of all ages. As China begins to reopen, Beethoven once again takes center stage.

The third annual China Now Music Festival taking place December 11-18, 2020 will provide a window into celebrations happening in China today, as well as explore Beethoven’s enduring legacy during the changing politics of the 20th century and China’s oscillating affiliation with Western classical music.

Asia Society Northern California along with the Asia Society Global Cultural Diplomacy Initiatives will host a panel on Thursday, December 17 featuring filmmakers and musicians involved in the documentary film, Beethoven in Beijing as part of the China Now Music Festival. The discussion will center around building new connections across cultures and between nations. This work exemplifies the idea of Culture as Diplomacy, a new initiative of the Asia Society.

Beethoven in Beijing starts with a forgotten moment in history, when President Nixon secured an invitation to have his favorite orchestra visit the People’s Republic of China and help renew relations after decades of isolation. The Philadelphia Orchestra’s 1973 tour was a tentative gesture of cultural diplomacy that resonates today, as China produces a new generation of musicians, erects dozens of new concert halls and sends talent to join orchestras around the world.

This program is complimentary and open to the global community.  Please consider making a donation to support our work.

Link to join virtually via Zoom will be emailed the day before and an hour before the program is scheduled to begin by James Gale, Director of Programs (JGale@asiasociety.org).  This will be a webinar program; attendees will not appear on camera and will participate via the Q&A box.

Nicholas Platt is one of America’s most distinguished Asia experts. Having worked as both a diplomat in the US Foreign Service and in the non-governmental sector as the president of the Asia Society, he is knowledgeable of both US policy towards Asia and domestic politics within Asia. Ambassador Platt has worked on an independent task force on new priorities in South Asia with the Council of Foreign Relations, assessing the strengths and weaknesses of India, Pakistan and Afghanistan so as to recommend how US policy can both take advantage of the opportunities and address the dangers within these countries.

After being educated at Harvard College and the John Hopkins University School of Advanced International Studies, Ambassador Platt began his 34-year Foreign Service career with assignments in Hong Kong (1964-68), Beijing (1973-74) and Tokyo (1974-77), and culminated with service as the US Ambassador to the Philippines (1987-1991) and Pakistan (1991-92). In 1972 he accompanied President Nixon on the historic trip to Beijing that signaled the resumption of relations between the United States and China. In addition to these foreign assignments, Platt also served in Washington as a China analyst, Director of Japanese Affairs, National Security Council Staff Member for Asian Affairs, Deputy Assistant Secretary of Defense (responsible for politico-military relations with Japan, Korea, China and Southeast Asia), Acting Assistant Secretary of State for UN Affairs (1981-82), and Executive Secretary of the Department of State (1985-87).

Jindong Cai joined the Stanford faculty in 2004 as the first holder of the Gretchen B. Kimball Director of Orchestral Studies Chair. He has held positions as assistant conductor with the Cincinnati Symphony and the Cincinnati Chamber Orchestra, working closely with conductors Jésus López-Cobos, Erich Kunzel, and Keith Lockhart. He led the Cincinnati Philharmonia Orchestra on a successful concert tour to Portugal, the only American orchestra invited to participate in the Cultural Festival of World Expo 1998 in Lisbon. He has also served on the faculties at Louisiana State University, the University of Arizona, the University of California at Berkeley, and the College-Conservatory of Music in Cincinnati.

Mr. Cai has received much critical acclaim for his orchestral and opera performances. In 1992, his opera conducting debut took place at Lincoln Center's Mozart Bicentennial Festival in New York, when he appeared as a last minute substitute for the world premiere of a new production of Mozart's Zaide. The New York Times described the performance as "one of the more compelling experiences so far offered in the festival." Mr. Cai has guest conducted the Arkansas Symphony, the Cincinnati Chamber Orchestra, the Cincinnati Symphony, the Louisiana Philharmonic, the Lexington Philharmonic, the Northwest Chamber Orchestra, and the Tucson Symphony, among others.

Starting as a wunderkind piano virtuoso in his early teens before turning to composition in college, he studied under the guidance of Juilliard Piano Chairperson Yoheved Kaplinsky, composer Andrew Thomas, and composer Samuel Adler.  As a former concert pianist, he has appeared with major US and European orchestras and given numerous recitals at prestigious venues in Europe, the Americas, and China. As a composer he has written eleven symphonies, three piano concerti, a quantity of chamber music and solo piano repertoire. His school-time works have won the American Society of Composers, Authors and Publishers’ Young Composer Award for eight consecutive years from 2006~2013.

Jennifer Lin is a former China correspondent for The Philadelphia Inquirer.  She is the Co-Director and Co-Producer of Beethoven in Beijing.  She uses the historic 1973 tour as the starting point for her narrative, and ends it in the present, showing through musicians like composer Tan Dun and pianist Lang Lang how China is energizing the world of music.

Jennifer Lin is an author and former journalist with The Philadelphia Inquirer, including postings as a correspondent in Beijing, New York and Washington, D.C. Sharon Mullally is an Emmy Award-winning producer, director and editor whose work has appeared in more than 20 feature-length documentaries.

Sheila Melvin writes about culture in China.  She is a regular contributor to The International Herald Tribune and Caixin, and her articles have appeared in numerous other publications, including The New York Times and The Wall Street Journal. She is the author of two books, Rhapsody in Red: How Western Classical Music Became Chinese (co-authored with her husband, Jindong Cai) and The Little Red Book of China Business. She is at work on a new book that examines China’s quest to become a cultural superpower.

Ryan Fleur is currently Executive Director for The Philadelphia Orchestra, responsible for the day-to-day operations and marketing of the Orchestra, TicketPhiladelphia, Information Technology Services, Human Resources, and the organization’s long-term planning efforts.

Prior to moving to Philadelphia, Ryan was president and CEO of the Memphis Symphony, an organization offering more than 250 performances and events annually. The Symphony is viewed by the community as a key artistic and civic asset. He took the helm of the Memphis Symphony in 2003 and led a comprehensive strategic planning process that focused on artistic excellence, education, and community engagement. The process has transformed the $5-million ensemble from an organization in the business of making great music to an organization that serves its community through great music. This transformation has been profiled in Symphony magazine, in a case study called “Fearless Journeys: Innovation in American Orchestras” (published by the League of American Orchestras), and on Polyphonic.org.

Rachel Cooper is Director of Global Cultural Diplomacy Initiatives at the Asia Society. Cooper has presented and curated film programs from India, Indonesia, China, Iran, Japan, Korea and Thailand, as well as producing and presenting performances from throughout Asia. She has co-sponsored and presented various film festivals and film series at the Asia Society, including the Iranian Documentary and Short Film Festival, the Asian American International Film Festival and the IAAC India Film Festival, among others. She has organized major arts and culture initiatives, including Festival of Song: Music of India and Pakistan, Creative Voices of Islam in Asia, Festival of Indonesia and Dance — the Spirit of Cambodia. In addition, she has conducted and published research on international impact of the arts, which resulted in the report Making a Difference through the Arts. In 2006 she was awarded the Dawson Award for Sustained Excellence in Arts Programming.

THANK YOU TO OUR CO-PRESENTER