The program will also include a presentation from artist Yang Yongliang, who will speak about his piece Whispering Pines in the Mountains moderated by Jay Xu, Director and CEO of the Asian Art Museum in San Francisco and Asia Society Northern California board member.

After this unique opportunity to appreciate the community locally, participants will join a screening to celebrate with Asia Society Centers around the world globally.

Link to join virtually via Zoom will be emailed the day before and an hour before the program is scheduled to begin by Palarp Jumpasut, Director of Partnerships (pjumpasut@asiasociety.org).  This will be a Zoom meeting; we encourage participants to turn on their cameras to make this session as interactive as possible.

Nanxi Liu is the CEO and Co-Founder of Enplug. She was named Forbes 30 Under 30. Enplug is a leading digital display software company used to manage and distribute visual communication on screens in Fortune 500 companies, banks, hotels, elevators, and universities. The company is headquartered in Los Angeles and has offices in Japan, Brazil, Poland, Australia, and the UK. While an undergrad at UC Berkeley, Nanxi co-founded Nanoly Bioscience, a venture-backed biotech company that develops polymers to eliminate refrigeration for vaccines and therapeutics. The company received the Top Research Award at the World Biomaterials Congress and Intel’s Top Social Innovation Award.

Kiki Kapany will speak on behalf of Dr. Narinder Kapany, 2019 Asia Game Changer West Honoree.  Kiki is the CEO and Executive Producer at Kikim Media. Her father, Dr. Narinder Kapany, is widely acknowledged as “the father of fiber optics". He has over 100 patents and has received many awards including the “Fiat Lux Award” from the UC Santa Cruz Foundation in 2008. He established a gallery of Sikh Art at the Asian Art Museum in San Francisco and is the founding chairman (1967) of the Sikh Foundation.

Roya Mahboob is an Afghan tech entrepreneur and founder of Citadel Software, a software development company based in Herat. In addition to being one of Afghanistan's first female tech CEOs, Mahboob founded the Digital Citizen Fund, a nonprofit that aims to increase women’s technological literacy and provide employment and educational opportunities for girls in Afghanistan. Mahboob was named one of TIME’s 100 Most Influential People in the World in 2013 for her innovative initiatives to expand computer education. She has created nine IT centers for girls in high schools across Afghanistan and plans to expand her programs to 40 schools, ultimately reaching more than 160,000 female students. Mahboob has also taken her model beyond Afghanistan to schools in Bangladesh, India, Pakistan and Nepal. After facing death threats from the Taliban and others for her work, Mahboob left the country in 2013 and spent two years working remotely before returning to Afghanistan in 2016.

Roopam Sharma, FRSA also known mononymously as Roopam, is a cognitive scientist and inventor creating social impact through disruptive technological inventions that solve perennial problems. Named among the top 100 most influential global thinkers in the world by Foreign Policy Magazine in 2019, Roopam is the inventor of Manovue: the world's first intelligent wearable visual assistant. Manovue employs artificial intelligence and the internet in the form of an inexpensive wearable glove and earpiece, allowing the visually impaired to read printed text, eliminating the need for braille language.

Dr. Samuel "Sam" So is the Lui Hac Minh Professor and Professor of Surgery at Stanford School of Medicine. He is also the founder of the multidisciplinary liver cancer program at the Stanford Cancer Center, and the Founder and Executive Director of the Asian Liver Center at Stanford University School of Medicine. Dr. So is a native of Hong Kong and received his surgical training at the University of Hong Kong and the University of Minnesota where he also completed his fellowship in multi-organ transplantation. Dr. So is recognized worldwide for his expertise in chronic Hepatitis B and primary liver cancer prevention, research, treatment and health policy.

Born in 1980 in Shanghai, Yang Yongliang graduated from Shanghai Institute of Design of China Academy of Art in 1999, majoring in visual communication and design. He now works and lives in Shanghai. He started his experiments with contemporary art in 2005, and his practice involved varied media including photography, painting, video and installation. He is best known for the contemporary ink landscape he created by integrating numerous urban and natural images together. Yang’s work has been exhibited at Moscow Biennale, the Metropolitan Museum of Art and Ullens Center for Contemporary Art among others and is collected by public institutes such as the Metropolitan Museum of Art, the British Museum, National Gallery of Victoria as well as by private collectors such as Uli Sigg.

Ken Wilcox currently serves as Chairman of Asia Society Northern California. Ken was previously the CEO of SVB Financial Group. In that role, clinic he successfully pursued a strategy of expansion and diversification, cialis while remaining focused on the group’s core niches of technology, life sciences, venture capital and premium wineries.  He is a member of the Board of the Asia Society of Northern California, the Asian Art Museum, the Equilibrium Capital Group, and Columbia Lake Venture Debt Fund. He is also an adjunct professor and member of International Advisory Board at Fudan University in Shanghai, and an advisor to a number of startups. Earlier in his career, Mr. Wilcox was a member of the board of directors of the Federal Reserve Bank of San Francisco from 2006 to 2012.

Dr. Michael Chui is a partner at the McKinsey Global Institute (MGI), McKinsey's business and economics research arm and sits on the board of Asia Society Northern California. He leads research on the impact of disruptive technologies and innovation on business, the economy, and society. Michael has led McKinsey research in such areas as data & analytics, social & collaboration technologies, the Internet of Things, and artificial intelligence, robotics & automation.

First Chinese American director at a major US art museum, Dr. Jay Xu is Director of the Asian Art Museum of San Francisco and a member of the Association of Art Museum Directors. He is an Asia Society Northern California board member and enjoys a rich variety of international museum experience. Prior to his appointment at AAMSF in June 2008, he had been Chairman of the Department of Asian and Ancient Art (2006-2008) and Head of the Department of Asian Art (2003-2006) at The Art Institute of Chicago, Curator of Chinese Art at the Seattle Art Museum (1996-2003), and Research Fellow at the Department of Asian Art at the Metropolitan Museum of Art (1995-1996). He began his curatorial career at the Shanghai Museum (curatorial assistant and assistant curator, 1983-1990), and received his graduate training in early Chinese art and archaeology at Princeton University (MA and PhD).

Palarp Jumpasut is Director of Partnerships at Asia Society Northern California. Prior to joining at Asia Society, Palarp worked at the World Bank in Washington, D.C. as part of the Doing Business report, working with key global contributors to the report including KPMG, PwC, and White & Case. She also worked within financial and private sector development as a Learning Specialist helping to organize high profile events including at the Annual Meetings of the IMF and World Bank Group. Most recently, she served as Director of Administration and Operations at the American Chamber of Commerce in Japan. 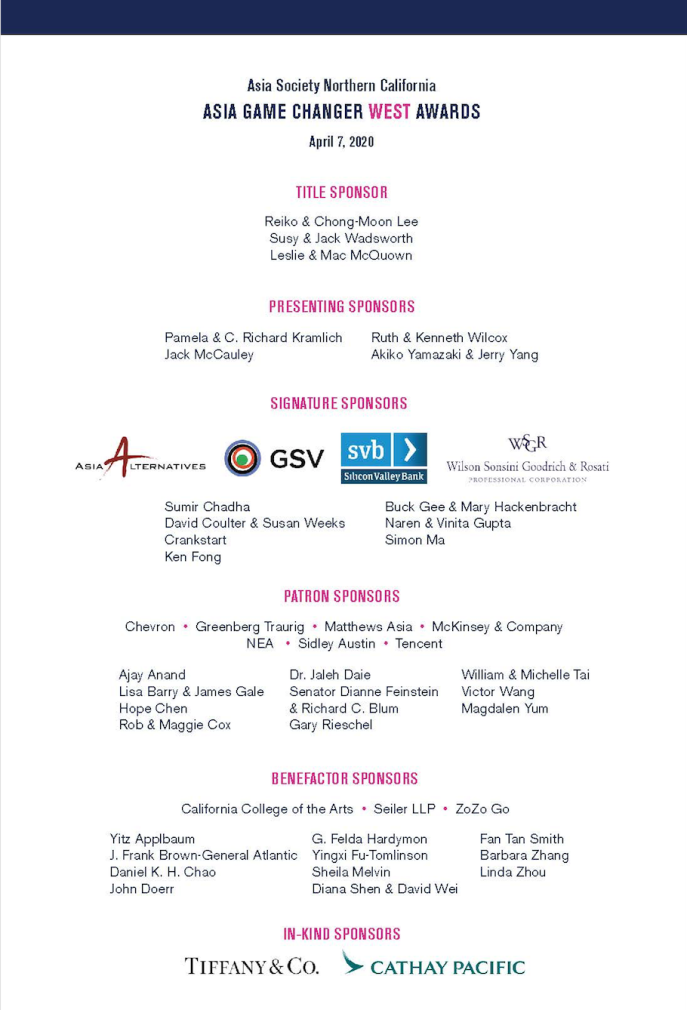