A Webinar By Asian Consulates General in San Francisco 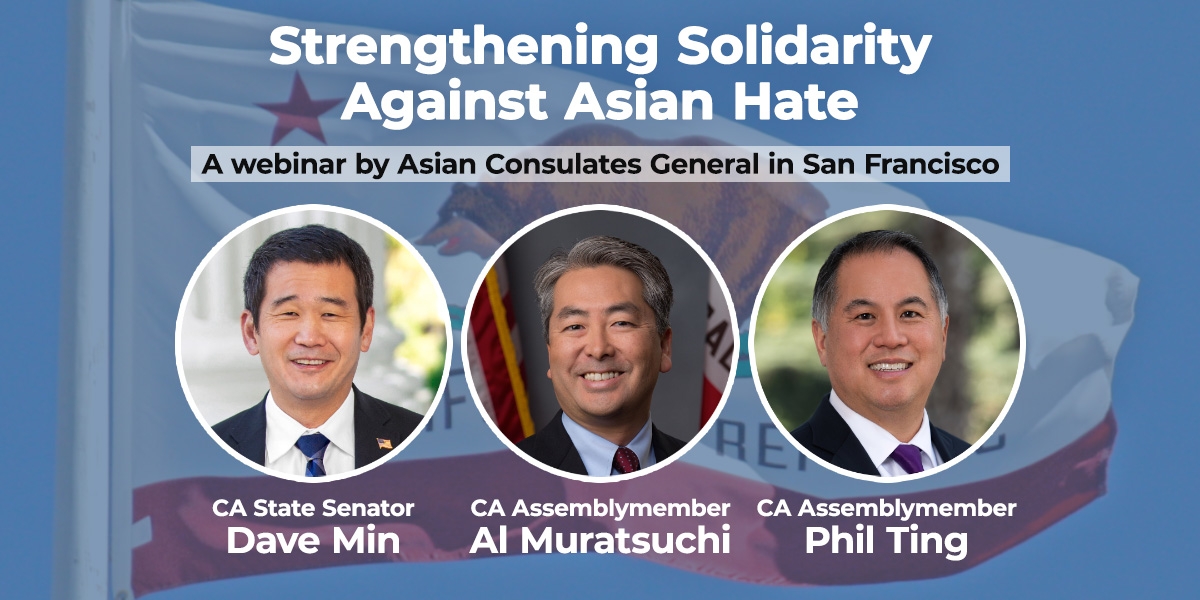 On Monday, August 9, several Consulates General of Asian countries in San Francisco in partnership with Asia Society Northern California will co-host a virtual program on Strengthening Solidarity Against Asian Hate: A Webinar by Asian Consulates in California.

California State officials and diplomatic representatives from Asian countries will share their views on the concerning rise of violence targeting Asians. They will discuss paths forward and how communities can strengthen solidarity against anti-Asian hate. A panel discussion with keynote speakers will be followed by a Q&A with Consuls General and the audience.

A written message from California Lieutenant Governor Eleni Kounalakis will be introduced at the beginning of the program, followed by a video message from The Honorable Rob Bonta, Attorney General of the State of California.

Confirmed keynote speakers for this program include:

Comments and Remarks from Consuls General in San Francisco representing:

Link to join virtually via Zoom will be emailed 72 hours before and an hour before the program is scheduled to begin by Rexille Uy, Director of Programs (ruy@asiasociety.org). This will be a Zoom meeting; attendees are encouraged to turn on their cameras and will use the chat box to submit questions.

Dave was a University of California Irvine law professor and a former economic policy staffer in the United States Senate and for the Center for American Progress. He began his legal career at the Securities and Exchange Commission to protect the retirement security of seniors, turning down high paying jobs to serve the public interest. Dave and his wife Jane live in Irvine, where they are raising their three young children.

Assemblymember Al Muratsuchi (D-Torrance) represents the South Bay of Los Angeles County and California’s 66th Assembly District, which is home to the largest number of Japanese and Japanese American residents and businesses in the mainland United States.   He is a former prosecutor and Deputy Attorney General with the California Department of Justice and a former Torrance School Board member.

Assemblymember Muratsuchi has been working with the Ministry of Foreign Affairs of Japan, Japan External Trade Organization, and others to introduce legislation to strengthen economic and cultural ties between the State of California and Japan.  He is the Chair of the Joint Legislative Committee on Climate Change Policies and the Assembly Select Committee on Aerospace.  Al and his wife Hiroko are raising their family in the South Bay, where he has lived for 25 years.

Phil Ting was elected to the State Assembly in 2012, representing the 19th Assembly District, which spans the Westside of San Francisco, as well as the communities of Broadmoor, Colma, Daly City, and South San Francisco.

As California navigates new challenges brought on by the COVID-19 pandemic, Ting is focused on economic recovery, while also continuing with progressive policies that protect and expand opportunity for all, equal rights, and environmental preservation. Because of his experience in the financial sector and as the San Francisco Assessor-Recorder, Ting has become a leading voice on California’s finances. He now serves as Chair of the Assembly Budget Committee after having served as Chair of the Assembly Committee on Revenue and Taxation.

Lulu C. Wang is the Founder and CEO of Tupelo Capital Management. Prior to founding Tupelo Capital Management in 1998, she had been a Director and Executive Vice President of Jennison Associates Capital Corporation. While at Jennison, Mrs. Wang managed multibillion funds for pension, endowment, and mutual funds. She joined Jennison Associates in 1988 from Equitable Capital Management where she had held the title of Senior Vice President and Managing Director. Mrs. Wang received her B.A. degree from Wellesley College and her M.B.A. from Columbia University Graduate School of Business. In her nonprofit work, Mrs. Wang served as Trustee and Vice Chair of the Metropolitan Museum of Art, Trustee of Rockefeller University, Trustee and Vice Chair of Asia Society, Co-Chair of The Chazen Institute for Global Business and Overseer of Columbia Graduate School of Business. She was a director of Metlife and is a trustee emerita of Wellesley College and a member of The Committee of 100. In her free time, Mrs. Wang and her husband collect vintage cars, as well as  American paintings, furniture and folk art.

Margaret Conley, a Bay Area native, is the Executive Director of Asia Society Northern California. Her non-profit experience includes the Berggruen Institute, where she launched a Philosophy + Culture Institute with a focus on the US and China. Margaret was based in Asia for several years as a television news correspondent with ABC News in Jakarta and Tokyo, and with Bloomberg Television in Shanghai. She was part of the global ABC team that won a News and Documentary Emmy Award for presidential inauguration coverage. Her interviews include Howard Schultz, Richard Branson, Ban Ki-Moon, LeBron James and Beyoncé. She has a bachelor’s degree from Columbia University and a master’s in journalism from the University of Hong Kong, which specializes in coverage of Asia. Margaret was selected as one of the Most Influential Women in Bay Area Business by the San Francisco Business Times in 2019. She is a member of the International Women's Forum.