Seeking Truth Through Facts: Intellectual Property in the Crossfire

Program 1 of 8 in our Seeking Truth Through Facts U.S.-China Program Series 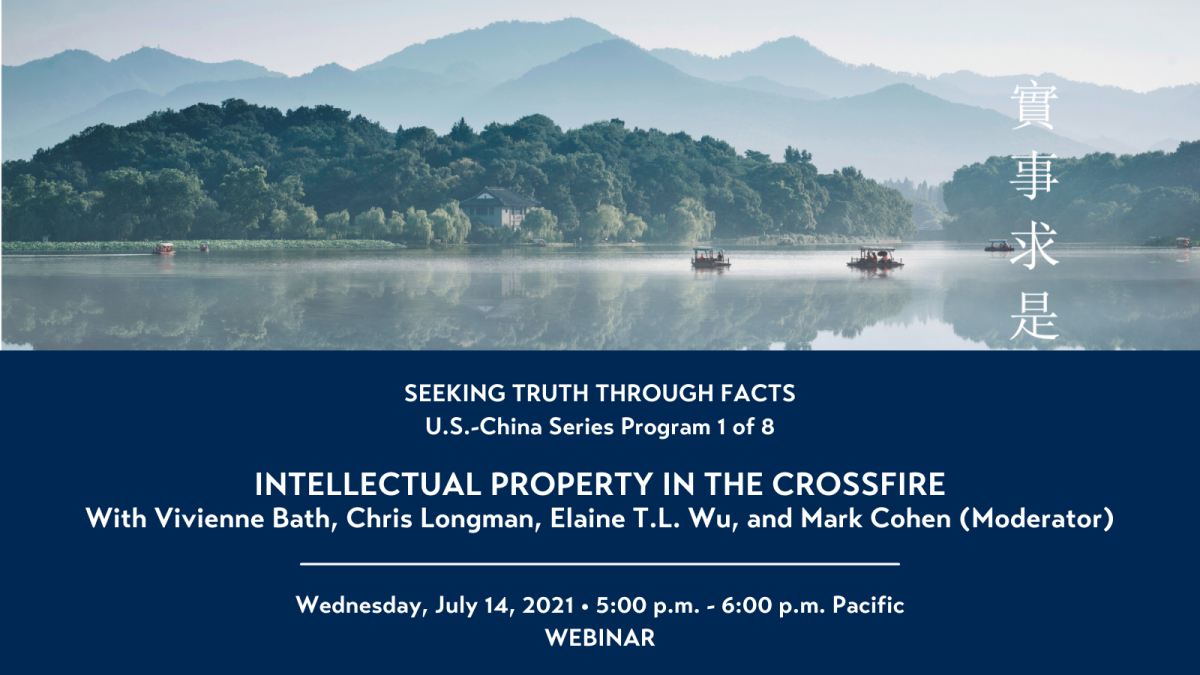 On Wednesday, July 14 Asia Society Northern California will host an off-the-record Executive Roundtable on Intellectual Property in the Crossfire as part of our second annual Seeking Truth Through Facts U.S.-China program series. Confirmed speakers include Vivienne Bath, Professor of Chinese & International Business Law and Director of the Centre for Asian and Pacific Law at the University of Sydney; Chris Longman, Vice President, Legal Counsel at Qualcomm; and Elaine T.L. Wu, Principal Counsel and Director for China IP at the Office of Policy and International Affairs (OPIA) in the U.S. Patent and Trademark Office. Senior Distinguished Research Fellow and Lecturer in Law at Berkeley Law and Asia Society Northern California Advisory Board Member Mark Cohen will moderate the discussion.

Intellectual property issues have been front and center in the bilateral relationship between the United States and China for many years and were a key driver behind the trade negotiations that resulted in the Phase One Trade Agreement. The discussion will explore the challenges facing U.S. companies in doing business in China, discuss the importance of the trade agreement in addressing IP challenges facing U.S. business, assess progress in implementing the terms of the agreement, and provide a front-line perspective from businesses and experts doing business in China on Chinese efforts to address IP challenges.

This event is the first of eight in our popular Seeking Truth Through Facts U.S.-China program series, which focuses on new strategic frameworks for the bilateral relationship, plurilateral relationships, rebalancing trade, national security, technology, and climate change; as well as the global impact of the political and economic landscape.  This program will lead up to our annual Future of U.S. & China Conference held in January 2022.

Link to join virtually via Zoom will be emailed the day before and an hour before the program is scheduled to begin by James Gale, Director of Programs at JGale@asiasociety.org.

Vivienne Bath's teaching and research interests are in international business and economic law, private international law and Chinese law. She has first class honours in Chinese and in law from the Australian National University, and an LLM from Harvard Law School. She has also studied in China and Germany. Professor Bath has extensive professional experience in Sydney, New York and Hong Kong, specialising in international commercial law, with a focus on foreign investment and commercial transactions in China and the Asian region. Professor Bath speaks Chinese (Mandarin) and German.

Chris Longman is Vice President, Legal Counsel at Qualcomm (San Diego).  Prior to that he was an attorney at Covington & Burling from 2008 to 2012 and an attorney at Heller Ehrman from 2004 to 2008.  Chris received his J.D. from U.C. San Diego School of Law.

Elaine T.L. Wu is the Principal Counsel and Director for China IP at the Office of Policy and International Affairs (OPIA) in the U.S. Patent and Trademark Office.  In that capacity, Ms. Wu is responsible for leading the OPIA China experts, a dedicated group of attorneys with expertise on China’s intellectual property system. The OPIA China experts work with other branches of the U.S. government to develop intellectual property policy focused on improving China’s intellectual property environment for the benefit of U.S. companies doing business there. The OPIA China experts also conduct extensive outreach to U.S. companies to educate them on how to protect/enforce their IP in China. Prior to coming to the U.S. Patent and Trademark Office, Ms. Wu worked as a patent litigation associate at several Washington D.C. based law firms. Ms. Wu has also worked at the International Trade Commission’s Office of Unfair Import Investigation where she handled legal issues relating to Section 337 of the Tariff Act of 1930, as amended, and at the Office of the U.S. Trade Representative’s Office of China affairs. Ms. Wu received her law degree from the Washington College of Law at the American University in Washington D.C.  She holds a Bachelor of Science degree with honors from the University of Florida.  She is licensed to practice law in the District of Columbia.

Mark Cohen is Senior Distinguished Research Fellow and Lecturer in Law at Berkeley Law.  He was formerly the Senior Advisor to the Director of the US Patent and Trademark Office (USPTO), a visiting professor at Fordham Law, a Director of International IP Policy at Fordham Law, the first USPTO official resident in China, and general counsel of a mid-sized pharmaceutical company.  Among his many honors, Mark is the recipient of the Meritorious Service Award, the highest award granted to the Federal Service, which was awarded by the President of the United States for Mark's work on technology transfer with China