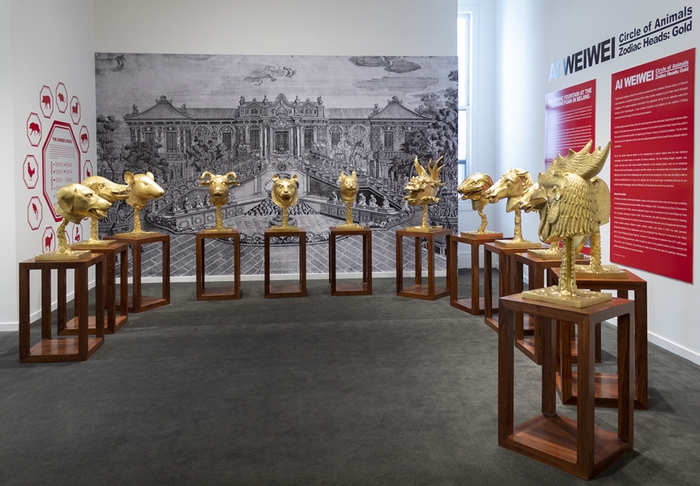 Ai Weiwei drew inspiration for the 12 heads from those originally located at Yuanming Yuan (Old Summer Palace), an imperial retreat of palaces and European-style gardens built outside of Beijing in the 18th and 19th centuries by Emperor Qianlong. Designed and engineered by two European Jesuits, Giuseppe Castiglione and Michel Benoit, the heads originally functioned as an ornate fountain clock that would spout water at two-hour intervals.

Once accessible only to the elite of 18th-century Chinese society, the garden was destroyed and looted by Anglo-French troops in 1860 during the Second Opium War, displacing the original zodiac heads. The seven heads known to exist (Monkey, Pig, Rat, Ox, Tiger, Rabbit, and Horse) have all been returned to China. Circle of Animals/ Zodiac Heads: Gold engages issues of looting, repatriation, and cultural heritage while expanding upon ongoing themes in Ai’s work of the “fake” and “copy” in relation to the original.

We will have a selection of hors d'oeuvres available as part of the art gallery tour.

Chip Tom is the Senior Curator for Heather James Fine Art and is based in Los Angeles and Palm Desert. He has curated many acclaimed art and design exhibitions globally, including Ketty La Rocca, and The Other Side: Chinese and Mexican Immigration to America. Chip has worked with museums ranging from Centre D’Art Contemporain, Geneva, to the USC Pacific Asia Museum, Pasadena. Most recent projects include serving as the guest curator for Art Macau 2019. He received his BA from Yale University. Chip lectures extensively with recent groups including the California Desert Art Council, and Yale University Alumni.