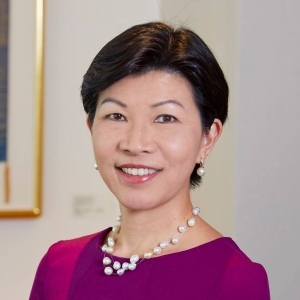 Kathy Matsui is former vice chair of Goldman Sachs Japan, co-head of Macro Research in Asia and chief Japan equity strategist. She was ranked No. 1 in Japan Equity Strategy by Institutional Investor magazine multiple times, was chosen by The Wall Street Journal newspaper as one of the "10 Women to Watch in Asia" in 2007 for her work on the "Womenomics" theme, and was also named to Bloomberg Markets magazine’s “50 Most Influential” list in 2014.

Matsui has served on numerous government committees aimed at promoting gender diversity in Japan. She is a board member of the Asian University for Women (AUW) Support Foundation, chair of the Board of Councilors (Japan) of the US-Japan Council, director of the Fast Retailing Foundation, and a member of the Council on Foreign Relations, The Nature Conservancy-Asia Pacific Council, and Keizai Doyukai. She also serves on the Advisory Council for the Japan Society Fund Against Breast Cancer.

Wendy Cutler is Vice President at the Asia Society Policy Institute (ASPI) and the managing director of the Washington, D.C. office. In these roles, she focuses on building ASPI’s presence in the nation's capital and on leading initiatives that address challenges related to trade, investment, and innovation, as well as women’s empowerment in Asia. She joined ASPI following an illustrious career of nearly three decades as a diplomat and negotiator in the Office of the U.S. Trade Representative (USTR), where she also served as Acting Deputy U.S. Trade Representative. During her USTR career, she worked on a range of bilateral, regional, and multilateral trade negotiations and initiatives, including the U.S.-Korea Free Trade Agreement, the Trans-Pacific Partnership, U.S.-China negotiations, and the WTO Financial Services negotiations. She has published a series of ASPI papers on the Asian trade landscape and serves as a regular media commentator on trade and investment developments in Asia and the world.