Program 2 of 8 in our Seeking Truth Through Facts U.S.-China Program Series 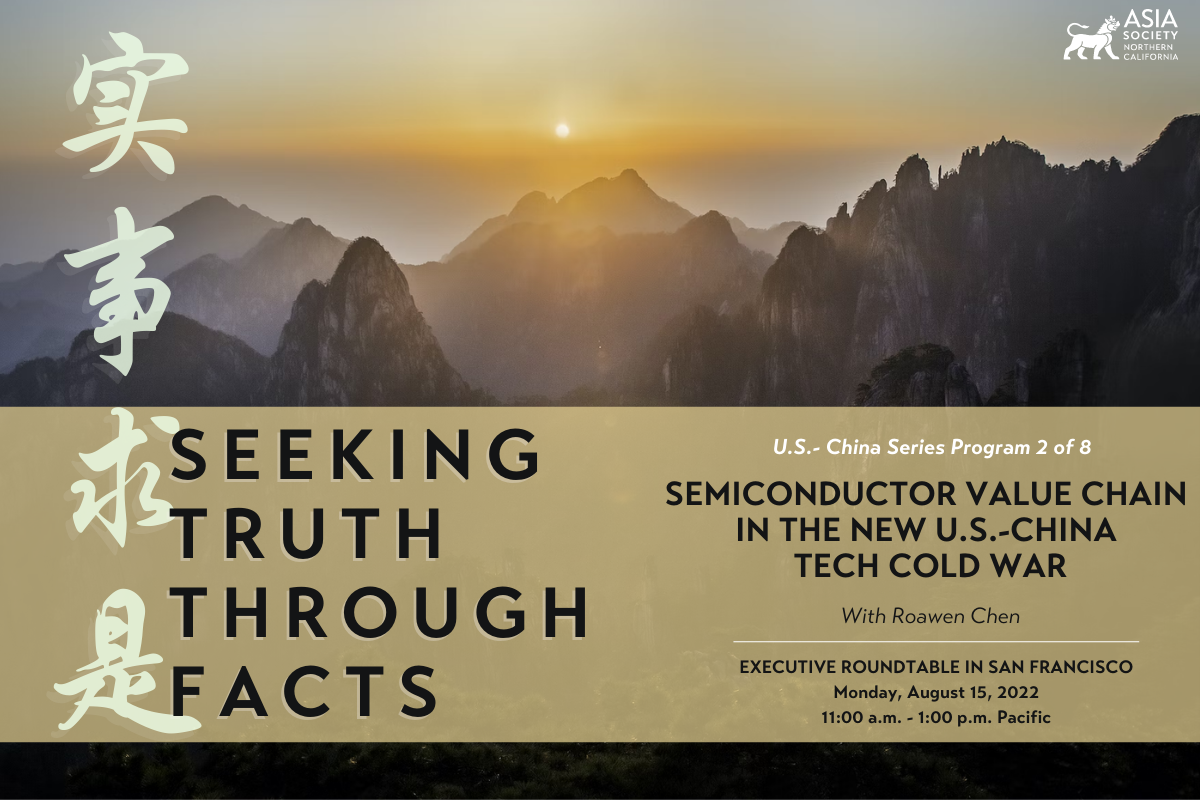 Join Asia Society Northern California for an off-the-record Executive Roundtable discussion for Board, Advisory Council, Groundbreaker and Innovator Members on Semiconductor Value Chain in the New U.S.-China Tech Cold War with Roawen Chen, Senior Vice President and Chief Supply Chain & Operations Officer of Qualcomm Technologies, Inc. on Monday, August 15, 2022 from 11:00 a.m. - 1:00 p.m. Pacific in San Francisco. This program will be moderated by Orville Schell, Arthur Ross Director of the Center on U.S.-China Relations at Asia Society. Lunch will be served.

This event is the second of eight in our popular Seeking Truth Through Facts U.S.-China Program Series, which focuses on new strategic frameworks for the bilateral relationship, plurilateral relationships, rebalancing trade, national security, technology, and climate change; as well as the global impact of the political and economic landscape. This program will lead up to our annual Future of U.S. & China Conference held in January 2023.

This Executive Roundtable Program is a special benefit for our Board, Advisory Council, Groundbreaker and Innovator Members. Learn more and become a member today: https://asiasociety.org/northern-california/join-our-community.

Venue address in San Francisco will be confirmed upon RSVP confirmation.

Location: Venue address in San Francisco will be confirmed upon RSVP confirmation. We will send you the venue location via Eventbrite* 1 week before the program begins.

Prior to Qualcomm, Chen was vice president of manufacturing operations at Marvell Semiconductor. Previously, Chen held a variety of leadership roles, including vice president and general manager of the Mobile Communication and Connectivity business unit, during his tenure at Marvell. Before Marvell, Chen also held technical and business positions at Intel and TSMC.

Orville Schell (Moderator) is the Arthur Ross Director of the Center on U.S.-China Relations at Asia Society in New York. He is a former professor and Dean at the University of California, Berkeley Graduate School of Journalism.  Schell is the author of 15 books, 10 of them about China, and a contributor to numerous edited volumes. His most recent books are: Wealth and Power, China’s Long March to the 21st Century; Virtual Tibet; The China Reader: The Reform Years; and Mandate of Heaven: The Legacy of Tiananmen Square and the Next Generation of China’s Leaders. He has written widely for many magazine and newspapers, including The Atlantic, The New Yorker, Time, The New Republic, Harpers, The Nation, The New York Review of Books, Wired, Foreign Affairs, The China Quarterly, The New York Times, The Washington Post, and The Los Angeles Times.

Schell was born in New York City, graduated Magna Cum Laude from Harvard University in Far Eastern History, was an exchange student at National Taiwan University in the 1960s, and earned a Ph.D. (Abd) at University of California, Berkeley in Chinese History. He worked for the Ford Foundation in Indonesia, covered the war in Indochina as a journalist, and has traveled widely in China since the mid-70s.  He is a Fellow at the Weatherhead East Asian Institute at Columbia University, a Senior Fellow at the Annenberg School of Communications at USC and a member of the Council on Foreign Relations. Schell is also the recipient of many prizes and fellowships, including a Guggenheim Fellowship, the Overseas Press Club Award, and the Harvard-Stanford Shorenstein Prize in Asian Journalism.

Venue address in San Francisco will be confirmed upon RSVP confirmation.

For event details visit https://asiasociety.org/northern-california/events/executive-roundtable-semiconductor-value-chain-new-us-china-tech-cold-war-roawen-chen Venue address in San Francisco will be confirmed upon RSVP confirmation.