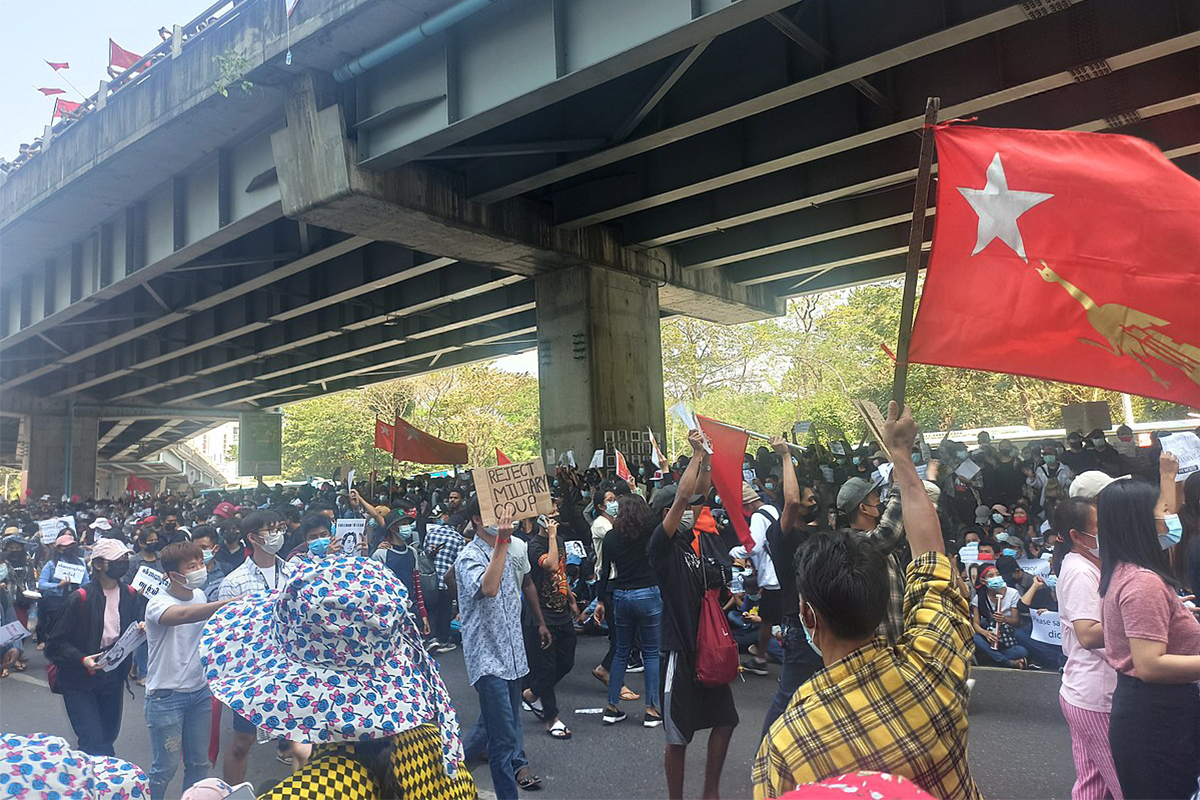 Protests in Yangon. Photo by သူထွန်း, licensed under CC-by-SA 4.0

Few outsiders have predicted the coup in Myanmar since the military has been in control of almost everything that is important to them. With the coup in early February, the young democracy has suffered a set-back. Ongoing street protests in Myanmar call for the release of the elected leader Aung San Suu Kyi and for democracy to be restored. As the situation is evolving rapidly, we’ll be taking a look at developments almost three weeks after the coup.

How is the atmosphere on-site in Myanmar? What course of action has the military taken by now? What is important to better understand the military junta? What are its impacts on civil society and ongoing ethnic conflicts? And what is to be expected on the different fronts?

Joining us in this webcast are Tim Enderlin, the Swiss ambassador to Myanmar, Nathalie Manac'h, founder of Nat Coffee and former Swiss diplomat based in Myanmar, Michael Vatikiotis, the Asia Regional Director of the Centre for Humanitarian Dialogue, as well as Montse Ferrer, Business & Human Rights Researcher & Advisor at Amnesty International and author of the Military Ltd. report, and we'll be playing a video input from Hnin Phyu Phyu Aye, a citizen of Myanmar working for an international NGO. The discussion will be moderated by Karin Wenger, Southeast Asia Correspondent for the Swiss radio and television broadcasting company Schweizer Radio und Fernsehen (SRF).

Hnin Phyu Phyu Aye is currently working at an international non-profit organization in Myanmar. Hnin has over six years of experience in skills development programs, gender and migration issues in Myanmar. She is particularly concerned about poverty alleviation and unemployment – two raising issues in Myanmar – and has been involved in creating job opportunities for the grass roots level, productive employment and improving the chance for youngster from rural areas to acquire better income generating jobs. Hnin has a degree from the University of Computer Studies from Mon State and an executive Master on Development Policies and Practices from the Graduate Institute of Geneva. She is an alumni of the Young Southeast Asia Leaders Initiative (YSEALI) supported by the U.S State Department Program.

Tim Enderlin has been representing Switzerland as ambassador to Myanmar since February 2019. In this function, he oversees one of the largest integrated Swiss embassies in the world. Previously, he had been regional director for the  Swiss Development and Cooperation Agency’s (SDC/DEZA) Mekong Program based in Laos. His previous postings also include Pakistan, as Deputy Head of Mission, and Ethiopia. During his time in Berne, Tim Enderlin was active in the federal administration, heading various sections and bureaus, the last of which as head of the Presidential Affairs and Protocols Division and Advisor to the President of the Swiss Confederation.

Nathalie F. Manac'h is the founder of Nat Coffee. She is coffee trader and former Swiss diplomat, currently travelling across Myanmar for direct-sourcing during coffee harvest. As coffee trader she is reaching out to remote rural areas where she gets in touch with different ethnic groups. The Swiss-French coffee expert started her business venture in 2015, a few weeks after the first democratic elections after almost 60 years of political and economical isolation in Myanmar. Since then she worked in six coffee regions in Myanmar, and launched a coffee group of entrepreneurs in Chin State, nordwest of Myanmar. With help of development funds and private sector contributions, her mission is to "seed the future generation of coffee entrepreneurs" in a peace context and foster direct-trade in coffee. She has begun strengthening business relations in Myanmar and the UNODC in Myanmar has invited her to give a presentation on specialty coffee markets. Nathalie speaks German, French, English, Russian, Hungarian and has some basic knowledge in Burmese. She has strong contacts in the coffee businesses’ global community, and she remains linked with the Swiss government. She likes connecting people and mediating across different cultures.

Michael Vatikiotis is a writer, journalist and private diplomat, currently serving as the Asia Regional Director of the Centre for Humanitarian Dialogue, a Geneva-based private foundation that facilitates dialogue to resolve armed conflicts, and a member of the Global Council of the Asia Society. Formerly, he was editor of the Far Eastern Economic Review and a correspondent for the Hong Kong-based news magazine for 16 years and still writes opinion pieces for international and regional newspapers and is a regular contributor to Al Jazeera and the BBC. He is the author of two novels set in Indonesia, his latest book Blood and Silk: Power and Conflict in Modern Southeast Asia was published in June 2017. Michael Vatikiotis has been working in Southeast Asia since 1987 and currently lives in Singapore.

Montse Ferrer manages the Corporate Crimes Project and is a Researcher and Legal Advisor in the Business, Security and Human Rights team at Amnesty International. She authored Amnesty International’s report Military Ltd.: The Company Financing Human Rights Abuses in Myanmar. Montse was previously Senior Legal Advisor at TRIAL International, where she managed the Corporate Accountability Team investigating the role of corporate actors in the commission of international grave crimes. Montse also worked for over seven years at Clifford Chance in the US and Asia Pacific in the Litigation and Arbitration department. She holds a Bachelor of Arts from Columbia University and a Juris Doctor from Cornell Law School. She is a qualified lawyer in New York and Washington DC.

Karin Wenger has been Southeast Asia Correspondent for the Swiss radio and television broadcasting company Schweizer Radio und Fernsehen (SRF) based in Bangkok since 2016. From 2009 until 2016, Karin was South Asia Correspondent for SRF based in New Delhi. From 2004 until 2009, she as freelance journalist in the Middle East, among others for the Neue Zürcher Zeitung. Karin studied Social Sciences (political sciences, media and journalism) in Fribourg (CH), Limerick (IRL) and at Birzeit University in the West Bank. She pursued her language studies in Spain and studied Arabic in Birzeit and Damascus, and worked as peace observer in Mexico and Gaucha in Argentina. 2006 she was awarded the Zurich prize for journalism. 2008 her book Checkpoint Huwara – israelische Elitesoldaten und palästinensische Widerstandskämpfer brechen das Schweigen (Checkpoint Huwara – Israeli elite soldiers and Palestinian resistance fighters are breaking their silence) was published by NZZ Libro.