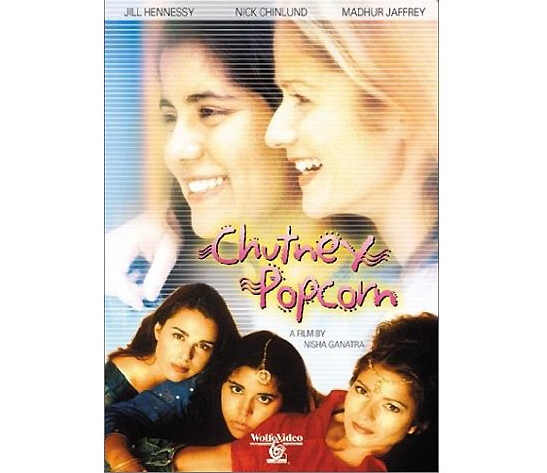 Nisha Ganatra is the director, co-writer, and star of Chutney Popcorn, a touching new comedy about the shifting relationships in an Indian-American family. Also starring veteran actress Madhur Jaffrey and her real-life daughter Sakina Jaffrey, Chutney Popcorn addresses issues of assimilation, surrogate motherhood, lesbianism, and family. The film has received many awards, including the Audience Award at both the 1999 Newport Film Festival and the Provincetown Film Festival, and the Best Feature Film Award at both the 1999 San Francisco Film Festival and the 1999 Los Angeles Outfest Film Festival. Asia Society caught up with the up-and-coming director in New York.

Where did you get the idea for the script?

The idea for Chutney Popcorn came from this image I had of one sister being completely late and missing her older sister's wedding and all the dynamics and tension that would cause. It was one of those rare occasions where just one image inspires an entire story. Susan Carnival, who co-wrote the script, was working on a script about two women having a baby and I was working on my family comedy. One day we just decided to make one of the sisters gay and blend the two stories together. I think it makes both stories more rich.

Like many people, your character, Reena, inhabits several worlds in the film. She is "Indian" to her white lesbian friends and "lesbian" to her straight Indian family. How do these two worlds interact in the film?

Both Reena and her sister Sarita are always straddling having an identity between cultures. I really wanted to show that in the film, without making an issue of it. I find that [this is the case] regardless of your cultural background. It's an experience common to most children of immigrants in the US. Being American enough to not feel at home in the country your parents came from, but ethnic enough to not fit in in America or be considered "American." It's a really specific but universal feeling and it contributes to feeling invisible in American society. All these dynamics are informing all the characters' choices but I really tried hard to make it a part of the characters and not preach about it. I really wanted to make sure the movie was not about the Indian American experience and not about the gay and lesbian experience. The movie is about what this family goes through and what they do to stay together. I wanted it to be entertaining first and foremost-- and to represent an experience that I think is never shown. But the fact that the family is Indian and the fact that Reena is gay is never the issue in the film. I think we would have lost a lot of humor and it would have made the story less emotional if I tried too hard to make those points. Besides - I think because of all the work that's come before - films can move beyond representing the lesbian experience. I mean, a lot of people have told me it's refreshing to see a movie with a gay character that isn't about being gay. Reena is gay - and no one really cares. They care that she's a flakey artist and that she can't be perfect like her sister, and we can all relate to those things a lot more I think.

How do you think this film stretches the concept of family?

I think it shows that family is really constructed and it's about unconditional love and support. Certainly the family is not very "traditional" but what's important is that you get that they all love each other very much and that everyone is cared for. That was more important in my notion of family than biological relationships.

In the film, Reena's mother, played wonderfully by Madhur Jaffrey, knows her daughter is a lesbian, but doesn't like to admit it on a day-to-day basis. Do you think this is a typical response?

I think so. We still live in a very homophobic society so I can't imagine a gay person's parent not going through this emotion. But what's more important is that she doesn't like to admit that her daughter is an artist on a day to day basis either. I think it's about her disappointment with the choices one daughter has made and not so much about her daughter being gay but about her being worried about her daughter being able to take care of herself and her daughter's ability to give her what she wants the most - a grandchild!

What were the dynamics like working with both Madhur Jaffrey and her daughter, Sakina Jaffrey? Did it make your role as a director easier or harder given that those two actors already had an established mother-daughter relationship?

Well it was the first time they worked together as mother and daughter, so it was very interesting. They have very different styles of working and it was an enormous pleasure to work with such talented actors. I think the mother-daughter relationship that was in place helped except that I think Sakina identified more with being in the "Reena" position and not the "perfect daughter" so that was interesting. She got to live out what it would be like to have her mother's praise shine upon her by playing Sarita. The three of us became very close and so sometimes it feels like Sakina really is my sister and Madhur our mom... but that's just because they are so warm and sweet. Madhur was a joy to work with. I have to say we were a little nervous about someone so big doing an indie film, but she was so professional and nailed every take perfectly. She never complained about the long hours (or the food, thank God!) and she was absolutely committed to making sure we got everything I needed out of every scene before she would go home. If there was any doubt in her mind that we rushed because of light or the performance was slightly off, she would ask me about it because she cared so much. Needless to say, the final results are incredible. It was so fun to let her humorous side out and watch the fun she had and everything she brought to this role. And Sakina really made Sarita work. The whole character hinged on that performance and it was tough. She struck the perfect note, and because of her thought and her talent and her amazing ability to express herself non-verbally, the entire movie works on so many more levels. I'm really grateful to have worked with such talent; I can't wait to work with both of them again.

What was it like to act, direct and write at the same time? Did you have much experience acting before this film?

I did have acting experience before this film, but nothing prepares you for the overwhelming task of triple and quadruple duty. I'm sure if we had more money or more time it would have been different, but with this there was just no time to think about it. The actress got another part and the choices were postpone the shoot or play the part. So we all kind of held hands and jumped in together. I know that being surrounded with such talent it was hard for me to go too wrong, but if I wasn't so close to that character already, I would have never done it. It's just two amazing crafts that are such opposites of each other. I love them both, but I would only act smaller parts in my own films or only in other films and I would love to only direct a movie next time. Wow, how much easier will that be when I don't have to keep running back and forth in front of and behind the camera?

What has the response been so far from the South Asian-American community?

It's been very supportive and really great. I was told that we were the first film to represent the Indian-American experience. A film about the generation that was born and raised here that's not about missing India and about missing the UK, but about what's going on here and how our identities have formed... I'm glad the community is being so supportive. I was worried about the gay theme but it's given me a lot of faith in our community that it hasn't been an issue.

Why is it important for South Asians to see this film?

It's important for South Asians to see this film for so many reasons. One - I made it for you, so please come see it! But more importantly, it's so important to support films about South Asians and by support I mean to actually go to the theater and buy a ticket to the movie. The only way we as a community are going to get any representation in Hollywood is by a strong show of economic force. It's just the plain truth. If South Asians don't turn up to see this film it sends the message back to Hollywood that there is no audience for a film with South Asians. It's unfair that that is how decisions are made, but it's true. So the next time someone wants to make a film with South Asians, they aren't going to get any support from Hollywood either. It took so long for African-Americans and Latinos to get representation in Hollywood, but it's finally happening. Until we do the same and show the same support for our community, there won't be any big South Asian Hollywood stars, there won't be a big Hollywood movie with South Asian actors….

Already I have Hollywood meetings and the first thing they ask me is, "Can you write a movie without South Asian characters in it?" I would love it if I could turn to them and say, "Yes, but look how successful South Asian films have been - how about if you let me write a part for '_______'. I'm sure they will be a big star too."

Then we can have our Jennifer Lopez, our Denzel Washington...