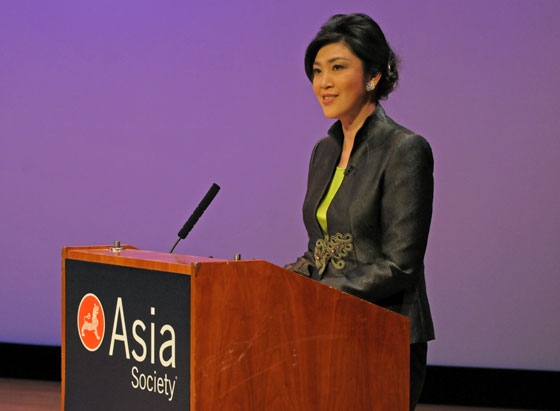 Following is the complete text of remarks by Yingluck Shinawatra, Prime Minister of Thailand, at Asia Society New York on September 26, 2012.

Thank you for the kind introduction. It is an honor to be here at the Asia Society and to meet all of you who have helped develop ties between America and Asia.

As many of you know, I had the pleasure of attending university here in the United States and consider the U.S. as somewhat of a second home. Thank you for being here tonight to welcome me back on my first trip to the U.S. as the Prime Minister of Thailand.

As the elected leader of America's oldest friend in Asia, I am proud to see Thailand, once again a democracy with respect for the rule of law, back on track — and able to work closely with the United States and our allies in the free world.

Indeed, after several years of political unrest, Thailand is experiencing a much welcome period of stability. My government's commitment to democracy, human rights and the rule of law has provided a strong foundation for economic growth.

We are implementing an economic program that not only promotes growth but also aims to create jobs and enhance the quality of life for our people. As a result of these efforts, we are expecting the economy to grow at around 5.5 to 6 percent in 2012, even with ongoing global economic strains and the floods last year.

With this political and economic foundation in place, Thailand is again ready and able to work with close partners like the United States to help shape the future of the Asia-Pacific century.

The Asia-Pacific region is a key engine of the global economy. The Asian Development Bank reports that Asia-Pacific's share of world GDP of 36 percent in 2011 remains the largest of any region.

The U.S. has an important role to play, with its GDP of some 14 trillion dollars, accounting for more than half of the total GDP of the Asia-Pacific. The U.S. is a leading trade partner and investor in the region. Between Thailand and the U.S., we enjoy some 35 billion dollars in trade, while the U.S. has invested nearly 13 billion dollars in the Thai economy.

We believe that the Thai-U.S. business partnership still has significant room for growth, as both Thailand and the entire region look forward to significant growth in the years ahead.

And we know that the U.S. is resilient and innovative and will bounce back from the economic troubles it has faced in recent years. The U.S. may be a bit "down," but your friends around the world and I am confident that the United States will again remake itself better and stronger coming out of the current crisis, just as it has done many times in the past.

This overall optimism with regard to the Asia-Pacific, which of course includes the United States, was reflected at the APEC Economic Leaders' meeting in Russia earlier this month which I attended, during which leaders agreed to resist protectionist policies and reaffirmed their commitment to further liberalize trade and investment.

To build on this momentum of progress and harness the potential of the Asia-Pacific, I believe Thailand and its friends should focus on a few key points:

First, the region's top priority must be to develop a strategy to ensure sustainable growth and development, despite uncertainties in the Eurozone and the U.S. economy.

Free trade and open markets must be a key pillar of any such strategy. We must continue to resist protectionism and keep markets open. Trade needs to be promoted, not restricted, to create jobs and growth for all.

Increasing trade volumes between Asia and Europe and the U.S. can and should be a win-win proposition, facilitating technology transfer from those markets to the developing nations of Asia.

This in turn will allow the developing countries of Asia to move up the value chain and create the foundation for their own long term growth.

At the same time, a growing Asia with growing purchasing power, will contribute to global growth by supporting the recovery in Europe and the U.S.

To protect ourselves from future external shocks, Asia also needs to develop a more diversified source of growth, by stimulating domestic demand and consumption.

That is why the realization of the ASEAN Community by 2015, particularly the Economic Community, is so important. The single market, which will boast a production base and market of some 600 million people, will feature innovations.

This includes the so-called "ASEAN Single Window," enhanced connectivity, and ASEAN FTAs with important partners and region-wide FTAs such as Regional Comprehensive Economic Partnership, which should accelerate ASEAN-led growth and attract U.S. investment.

In this context, we are pleased to support the historic reforms the government of Myanmar is making to open up their country. We welcome the remarkable progress Myanmar has made in moving toward democracy and reforming its economy, and we are confident that these changes will benefit the people of Myanmar, as well as the economy of the whole region.

Thailand is playing our part to encourage this transformation in many ways, including by providing support for Myanmar's development of the deep seaport known as Dawei.

Once completed, this massive project will link the Indian Ocean and the Pacific, through a land bridge in Thailand. In so doing, it will provide a new and shorter transportation route that should significantly boost trade and the free flow of goods and people necessary to promote economic growth and development.

Thailand's planned investment of 100 billion U.S. dollars in infrastructure development and water management systems surrounding this project will transform connectivity in Thailand and the region.

Ladies and gentlemen, we will not be successful in promoting economic growth and prosperity if there are tensions and conflicts in our region. One issue that runs the risk of increasing tensions in the months and years ahead is that of overlapping claims in maritime areas.

My government fully recognizes the sensitivities of the claims issue among the parties concerned and remains determined to do what we can, as a non-claimant, to help our neighbors find a peaceful solution. In the end, we all have a shared interest in maintaining open sea lanes safe from conflict and free from piracy, as significant global trade passes through these waterways.

Moreover, we believe that maritime areas such as the South China Sea should be seen as areas of opportunity for cooperation rather than for conflict.

So Thailand will remain focused on supporting peaceful efforts of parties concerned and cooperation that generate win-win solutions in the South China Sea. Cooperation on issues such as environmental research and disaster relief within the framework of the Declaration on the Conduct of Parties (DoC) is a good place to start.

While in no way underestimating the scope of these challenges or sensitivity of these issues, perhaps I can bring a bit of a "woman's touch" to addressing these conflicts and focus more on what we can do together, rather than on what divides us.

Ladies and gentlemen, much has been said about the "Asia-Pacific century," and indeed, as I suggested earlier, I am optimistic that the region can and will drive global growth into the foreseeable future.

But to maximize our prospects for success, we need to develop more effective regional frameworks to better manage relations in the Asia-Pacific as the region grows in political and economic strength.

Of course, the most basic foundation for regional cooperation is good relations and trust between and among states.

Thailand enjoys friendly relations with all key players in the Asia-Pacific; we have what we call a "strategic partnership" with China while at the same time being a longstanding ally of the United States, with whom we also enjoy a "Creative Partnership," which focuses on cooperation in technology, education and innovation. We believe in constructive relationships among the major powers, especially between China and the U.S..

But we need to look beyond bilateral relations and strengthen regional arrangements.

ASEAN of course has played an important role in recent decades in convening other partners, including major powers of the U.S., China, Japan and Russia, in various ASEAN-led regional processes. ASEAN will continue to have an important role to play in this regard into the future.

The East Asia Summit (EAS), can also provide an important framework for multilateral talks and cooperation. We need to strengthen this forum further so that the region can more effectively address strategic issues of common concern, including the global economic crisis, disaster management and maritime cooperation.

The EAS should focus on providing concrete results, with good follow-up to support Leaders' initiatives.

At the same time, we need to continue to strengthen APEC's role in promoting win-wins on trade and economic cooperation for the region and beyond.

One example where Thailand can play an important role is on regional and global food security, given our status as one of the largest producers of rice, seafood and other food products. Thailand is committed to working with our partners in the U.S., China, Japan, Australia and elsewhere — as well as with multilateral organizations — to help maximize these resources.

We need to develop new technologies to reduce food waste in transportation and storage. In the twenty first century, we should commit ourselves to ending hunger in our own countries and around the world. More focused collaboration on technologies that provide greater capacity for rapid and safe transport and storage could help us make significant progress in achieving that objective.

Ladies and gentleman, these are in many ways difficult times. Many countries around the world are struggling with economic and political unrest. In this globalized world, we are all affected.

The Asia-Pacific can shine a light of hope for the rest of the world, by getting its own domestic and regional affairs in order, as we have been doing and will continue to do. We look forward to working with our friends in the U.S. and with other partners on this shared objective and welcome any and all creative ideas.

I am committed to doing my part by:

· ensuring that Thailand is peaceful and stable at home;

· reaffirming our commitment to work with our longstanding ally the United States and other key partners like China and our neighbors in ASEAN to maximize our areas of cooperation and minimize the areas of disagreement, and.

· strengthening the regional arrangements necessary to ensure that all the powers of the region, large and small, are able to live and work together to use the potential of the Asia-Pacific century and make the world a better place.

I am hopeful that these efforts, combined with the now 179-year-old partnership between Thailand and the United States, will serve our two countries well.

And I hope that the Asia Society will continue the long and proud tradition of binding Asia and America together to help maintain peace and prosperity in the Asia-Pacific.

Thank you for having me here today to share some of my thoughts. I look forward to hearing your questions and comments.