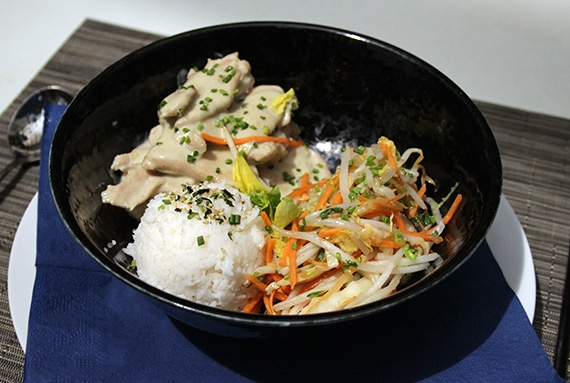 Read our interview with Singaporean designer Edwin Low, co-owner of "Supermama." Delicate and unique porcelain pieces by "Supermama" will be showcased at AsiaStore as part of Singapore Design Now. Learn more

Singapore is one of the world’s top-notch food destinations. The country is known for serving up diverse flavors borrowed from migrant populations from all over the region. Nyonya style cooking, which combines Chinese ingredients with Malaysian and Indonesian spices and cooking technique, is at the center of Singaporean cuisine.

Nyonya cooking originates from Peranakan people, Singapore’s population of immigrants from China who settled in an area that was then a British colony called the Straits Settlements. This area was comprised of two areas now designated as Singapore: Penang and Malacca. This region is known for its bold flavors, which comes from the frequent use of unique ingredients like coconut milk, a ginger-like root plant called galangal, kaffir lime leaf, and lemongrass.

The famed chef Malcolm Lee works at Singapore’s Michelin-starred Candlenut restaurant. There, he has made a name for himself by serving up modern takes on the traditional Peranakan cuisine he grew up eating. In conjunction with AsiaStore's special Singapore Design Now showcase, Lee shared a few of his signature dishes with diners at the Garden Court Café. One of his most popular dishes is Yeye’s Curry, a white curry dish with coconut chicken is inspired by his “yeye,” or grandfather.

“These recipes and culture is always passed down from one generation to another,” Lee said in AM New York. “It’s a very family-style culture. That’s something we wanted to share with people here.”

Stop by The Garden Court Café through the end of July, Tuesday through Sunday from 11:30 am to 3:00 pm to try one of Lee's special limited-run dishes.