The herbs and spices that characterize Indian cooking

You've heard about the Season of India, Asia Society's slate of fall programs, and Asia Society Museum's current exhibition The Progressive Revolution: Modern Art for a New India. But do you know about ... the seasonings of India? The subcontinent's fiery curries, complex rubs, and addictive street foods owe their flavor to a long list of spices from all over the world. These are combined, blended, fried, and toasted in millions of kitchens all over the country, from the metropolitan stoves of Mumbai and Delhi to fires in the Himalayan hills to beachfront grills in Goa.

The essential herbs and spices found in Indian cooking originate from every corner of the globe, and many have health benefits in addition to enhancing the taste of food. Spice blends and mixtures owe as much to the principle of Ayurveda — balance in all things — as they do to flavor adjustments. What follows is an introduction to the most popular and common flavorings found in Indian cooking across the subcontinent — though this is by no means complete.

Looking for how to sample the seasonings of India? Read our interview with Garden Court Café Chef de Cuisine Tsering Nyima to find out more about his favorite India-inspired dishes on the fall menu. In addition to his culinary duties, Chef Nyima shares insight into the medicinal uses of certain popular India spices below.

A member of the parsley family, the fruit of the ajwain plant has a flavor profile somewhere between oregano and anise. It smells like thyme and is commonly found in tadka, an aromatic butter added to lentil dishes such as dal tadka. Its digestive properties also are used to reduce the gaseous and bloating properties of beans and legumes.

One of the world's oldest flavoring agents, asafetida is a notoriously pungent resin employed in cooking from the Middle East to the Indian subcontinent. It smells like bad body odor when raw — but after toasting in oil, asafetida boasts a rich aroma of garlic, leeks, and shallots. Its uses are myriad, from a substitution for garlic and onion in Jain cooking (whose religion prohibits the consumption of such spices), to usage in the Tamil spice mixture sambar podi, which is commonly used to flavor non-meat dishes in vegetarian-heavy southern India.

It may surprise you that the fiery flavor of fresh and dried chilies is not native to India. Brought over by Portuguese traders from the New World, it is no exaggeration to say that wars have been fought and thrones won and lost in pursuit of spice. Now one of the world's largest cultivators of chilies, the cayenne pepper is an indispensable part of Indian cooking, adding heat and complexity to almost every dish.

Raghavan Iyer refers to cumin as "India's favorite spice." The noted culinary scholar and cookbook author also asserts that there are eight different flavor expressions for cumin, depending on how it is prepared. Commonly, it flavors dals (soups), tandoor (clay oven) dishes, spice mixtures including garam masala and chaat masala, and curries.

Noted for its aroma of fragrant bitterness, both fenugreek (methi) seeds and leaves figure prominently in cooking across India. Toasted, oil-roasted, or stir-fried fenugreek seeds add bitterness and balance to various dishes. In the north, cooks prize the plant's aromatic leaves for the earthy, pungent flavors they contribute to curries such as butter chicken. The traditional scent of curry powder comes from sotolon, a chemical compound found in fenugreek. According to Chef Nyima, "methi also has medicinal properties. A spoonful of powdered methi and turmeric every day can lower high blood sugar levels."

Contrary to popular belief, most Indian cooking does not start out with generic premixed "curry" powders. Instead, each dish requires a specific mixture of freshly roasted, toasted, fried, and ground spices. One exception to this practice is garam masala, a premade mixture of spices whose recipe is frequently passed down from generation to generation within the family. Recipes for it abound, but most versions contain cloves, cumin, cinnamon, nutmeg, cardamom, coriander, black peppercorns, bay leaf, and mace. "Garam" translates into hot and the mixture is meant to have warming properties according to Ayurvedic principles of balance. Consuming garam masala in seasoning form is meant to have both culinary and health benefits.

Indian cooking relies heavily on brown and black mustard seeds, toasted in oil until they "pop" and infuse curries and other dishes with nutty, toasted aromas and crunchy texture. Pungent mustard oil is an essential element of Indian pickling and preserving, as well as frequently added to curries from the eastern, northern, and northwestern regions.

Turmeric has been a mainstay of Indian cooking and traditional medicine for centuries. The close relative to ginger has a spicy and pungent taste and brilliant golden hue. Chef Nyima's "favorite" under-utilized spice, its flavoring potential in recent years has been eclipsed by its status as a "superfood" added to various dairy, juice, and smoothie-adjacent beverages. Curcumin, a chemical compound found in turmeric, has myriad anti-inflammatory, antimicrobial, and antioxidant properties, and may even play a role in curing cancer. 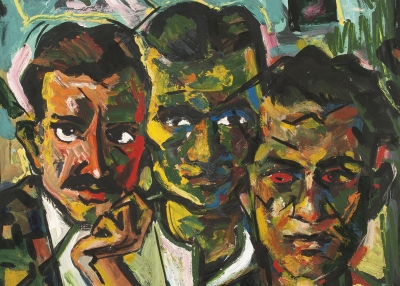 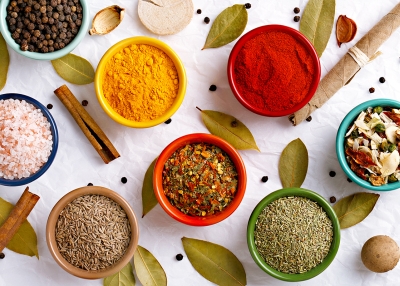 The Spice of Life: An Interview with Chef Tsering Nyima 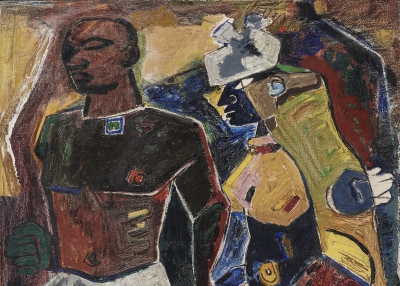 The Progressive Revolution: Modern Art for a New India

A landmark exhibition of works by members of the Progressive Artists’ Group, formed in India following independence from the British Empire.