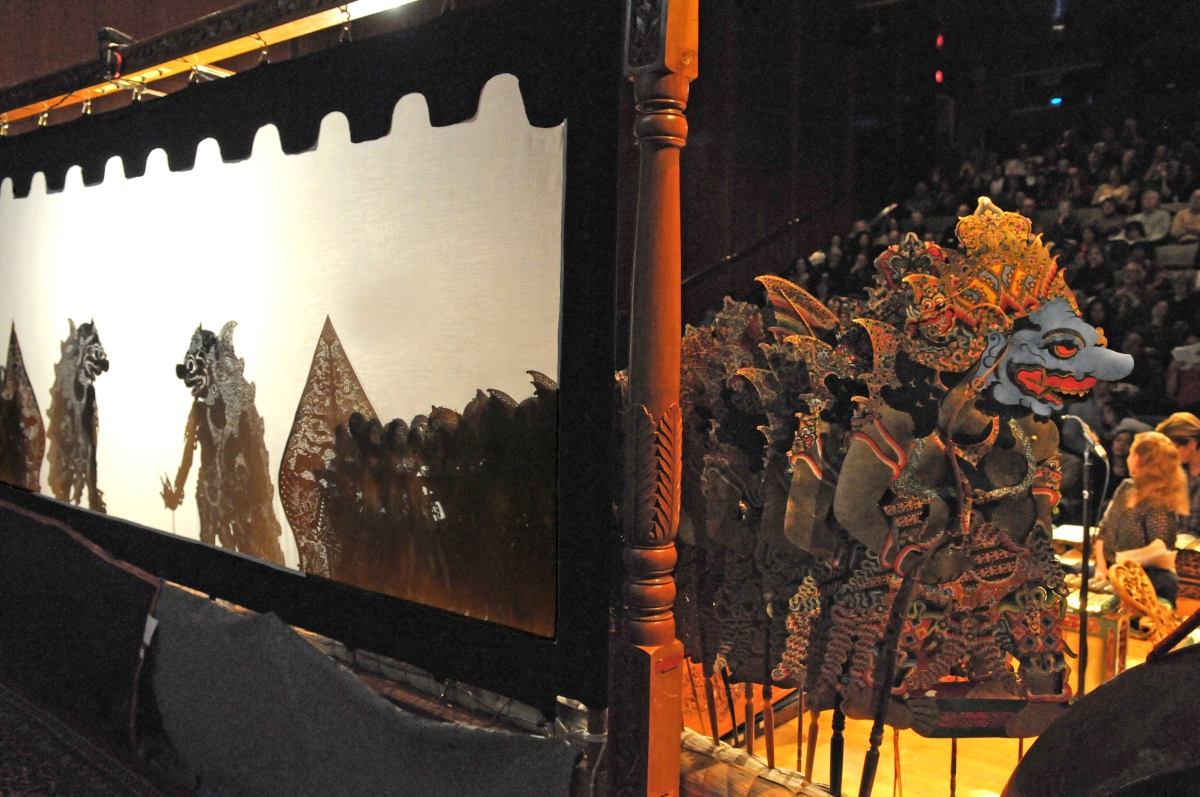 There were many highlights during Asia Week in New York — a sublime polychromed wood Lokeshvara from Tibet at John Eskenazi, a rare Sogdian cup at James Lally, a Jakachu painting at JADA, among others, and some interesting lectures — but the star of the week was the performance of a Javanese wayang kulit, or shadow puppet play, at Asia Society arranged by the Director of Performing Arts, Rachel Cooper.

The ensemble was led by the renowned dhalang (puppet master) Ki Purbo Asmoro of East Java, the seventh of his family to follow this ancient profession. The dhalang must be a polymath, as he recites the story, sings in multiple voices according to the character speaking, directs the orchestra and singers by signals with metal strips activated by his foot and a wooden mallet that he raps against a box, inserts improvised comments drawing on current affairs, makes jokes relevant to contemporary events, all the while brandishing the puppets, delicate traceries of stretched and dried water-buffalo hide splendidly painted and gilded and attached to slender stays of buffalo horn. Behind him a lamp throws light on the wayang, whose shadows are then projected on a screen. The performance is usually viewed from the shadow side, adding to the mystery, but this time the entire ensemble was visible to the audience, an entrancing sight where singers and instrument players could be seen in lively participation. Lest the magic of the shadow world be lost, however, a television rendering of the view from the front of the screen was projected at the side of the stage.

The gamelan orchestra comprised members of the Gamelan Kusuma Laras from the Indonesian Consulate General and also the Mayangkara group from Java, whose lead singers brilliantly performed the solos backed up by a choir. The Javanese gamelan ranks with the world’s most beautiful music, and the ensemble performed with great skill and feeling.

Traditionally a wayang performance in Indonesia continues all night, with the audience occasionally drifting off to find snacks, taking short naps, reacting to the dhalang’s monologue and his improvisations drawing on contemporary events, sometimes to make political comments, sometimes to amuse. The version at Asia Society was tailored to a Western audience, however, and lasted just three hours. It told the story of Dewa Ruci, where the Pandhawa family’s warrior brother Bima (one of the great heroes of the Mahabharata epic) seeks enlightenment. The enraptured audience was encouraged to stroll around the stage and look behind the screen, and also to applaud any particularly virtuosic feats by Pak Purbo. To make non-speakers of Javanese aware of the plot and dialogue, a simultaneous translation was projected on a screen above the dhalang through the brilliant rapid typing of Kathryn (Kitsie) Emerson, a longtime researcher of gamelan and wayang who has worked with Pak Purbo all over the world. The entire audience was thus able to share in the drama and comedy. The excitement was palpable, the scene effulgent with the glittering forms of the wayang and the colorful gilded instruments, the music and narration lively and varied. The applause when the final scene concluded continued for many wildly enthusiastic minutes. It was pure magic.