Photos: The Premiere of 'Fragility' by Susie Ibarra

Last week, Asia Society hosted the world premiere of percussionist and composer Susie Ibarra's new piece, Fragility: An Exploration of Polyrhythms. Performed by Ibarra, dancer Souleymane Badolo, and musicians from the DreamTime Ensemble, the work explores the concept of fragility through the lens of polyrhythms, capturing the subtle interactions that affect relationships. Developed as a "game piece," Fragility incorporates all of its performers and audience members into the performance: The artists take turns in conducting the action and viewers were able to dictate certain rhythms and trajectories during individual moments.

Fragility's production included music, dance, and visual elements. Performed in the Starr Gallery at Asia Society, the ensemble of musicians played in the center of the space, surrounded by audience members. Dancer Badolo moved throughout the gallery, interacting with custom motion-capture technology where his movements triggered previously recorded sounds resulting in a live rhythmic composition.

To learn more about the project and performance, download the show notes here.

Check out some of our favorite moments in the photos below:

Fragility was commissioned and produced by Asia Society as part of Creative Common Ground, an initiative that expands contemporary performance practice by commissioning, producing, and presenting artists who explore beyond traditional disciplinary boundaries. The initiative is supported by a generous grant from the Andrew W. Mellon Foundation. Fragility: An Exploration of Polyrhythms has been developed in partnership with Pioneer Works with additional support from the Foundation for Contemporary Arts Emergency Grant during the residency phase. 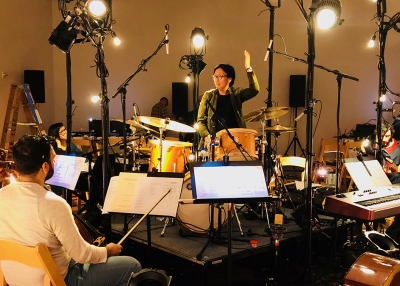 Asia Society chats with the composer and drummer on her new multidisciplinary work, 'Fragility: An Exploration of Polyrhythms.'