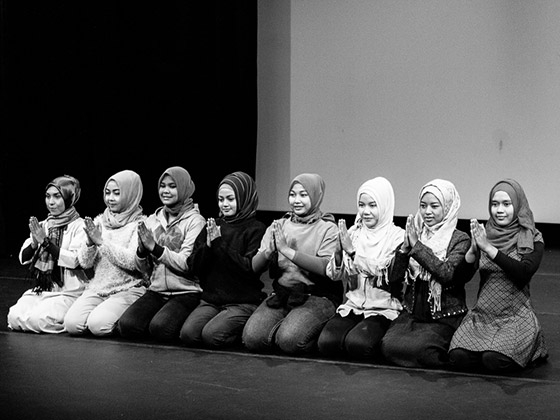 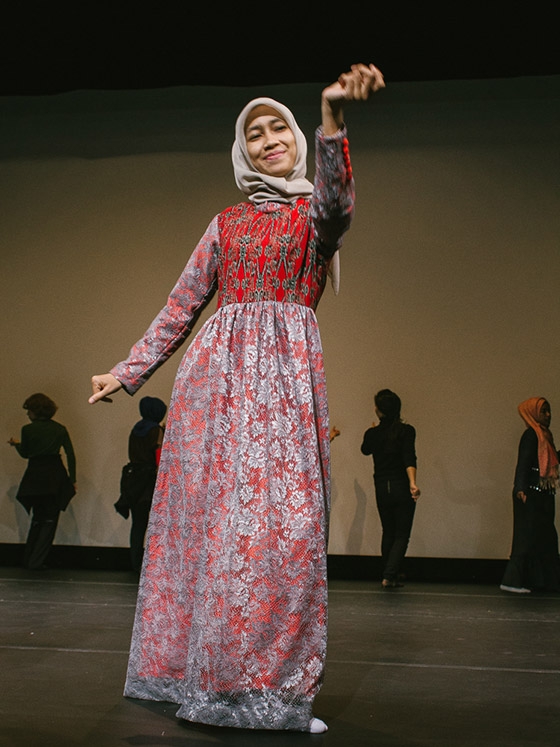 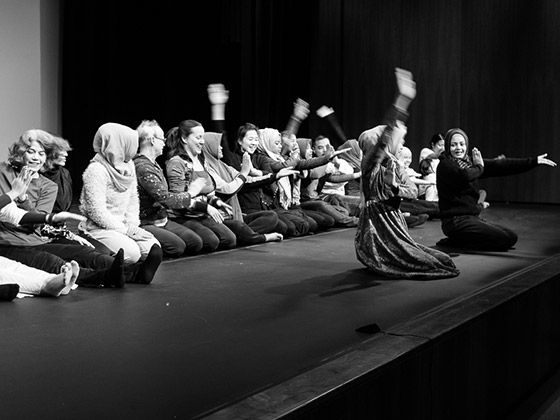 Here are some highlights from Tari Aceh’s weekend in New York with the Asia Society, which included a performance, workshop, and a trip to the Metropolitan Museum of Art.

As the performance of traditional Indonesian song and dance historically lives in religious and communal spaces, Tari Aceh’s performance offered a special immersion into various forms of Islamic expression.

The dance and song lyrics from Tari Aceh’s performance represented dakwah, a vehicle for sharing Islamic teachings. The songs often featured repetition and call and response, a common compositional structure in traditional music. Soaring melodies and passionate voices came together in unison and evoked a sense of antiquity. Audiences were invited to listen in on melodic gems that generations of communities had held near their communal heart.

Dance choreography divided into two main categories, sitting dances and standing dances, and ranged from purely traditional compositions to those with a contemporary influence. Combining Islamic teachings, moving melodies and lyrics, and a vast movement vocabulary, Tari Aceh presented a complex performance, a testament to their mastery of these different expressions of Islamic faith.

Ratoeh Duek, the female version of the Aceh male dance of Tari Saman dance, emerged from a history of rebellion. It was once banned in Aceh, where performers used it as a revolutionary tool by adapting lyrics to express political dissent. This performance carried on that defiant spirit in its all-female make-up, a departure from the male-dominated ensembles of most traditional Aceh performances. The women of Tari Aceh displayed fearlessness with their powerful movements and unabashed vulnerability as they shared raw emotion with the audience, effectively shattering common Western stereotypes of restricted and reticent Muslim women.

During the workshop, Tari Aceh members exemplified strong leadership by guiding participants through complex movements and group patterns and by teaching in English with a confident tone. As evidenced by the growing number of all-female troupes, dance provides a nimble and compelling language which, when ripened by social conscience and invention, can help these young women to challenge the status quo.

Interplay at the theatre

Tari Aceh’s ability to connect with the audience and invite participation was a compelling aspect of their performance. This was especially evident during the Ratoeh Duek dance which enraptured the audience.

Unlike most dance forms from the Western canon, the Ratoeh Duek is performed in a horizontal line with dancers in a sitting position, shoulder to shoulder. It is characterized by distinctive movements including body percussion, intricate hand movements, and partner work with technical exactitude and prowess.

The dancers introduced a melodic phrase at a moderate tempo and repeated the phrase at increasing speeds until finally bursting out at breakneck speed. Audiences erupted in cheers at the apex after the first few phrases, and soon learned to watch with anticipation as each new phrase was introduced, never losing enthusiasm as countless phrases were performed. The reception of the Ratoeh Duek exemplified how a display of technical marvel can connect with audiences cross-culturally by inciting awe.

The theater provided a space in which humanity was central; a space to discard prejudice and gain a new perspective, a space that at once reflected the realities of society and reimagined another.