'Music in Mongolia is Everywhere' 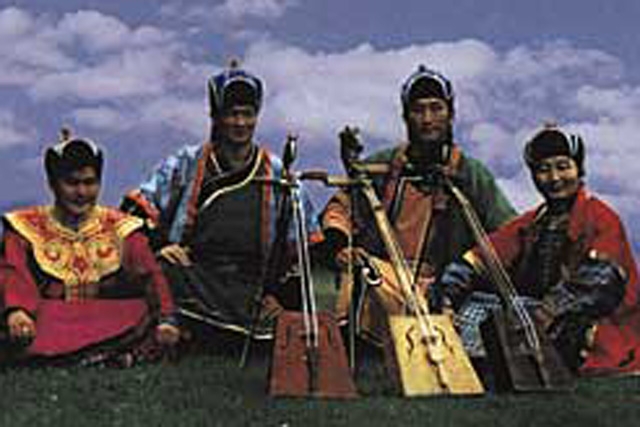 NEW YORK, July 17, 2000 - Altai-Hangai is a Mongolian musical group that fuses the sounds of traditional throat-singing and horse-head fiddle with contemporary forms of jazz. Named after the Altai Mountains and Hangai Steppes of Central Mongolia, Altai-Hangai's music invokes Mongolia's harsh climate, the Mongolian reverence for nature, as well as Mongolia's intense love of horses. The group, made up of Palamshav Childaa, Ganbold Muukha, Ganzorig Nergui, and Byambakhishig Lhagva, has also received a great deal of international acclaim. After hearing one of their performances, world famous-cellist YoYo Ma was so impressed that he invited Altai-Hangai to join him on his solo tour of Europe. Asia Society spoke with the group while they were in New York for an Asia Society performance.

Can you talk a little bit about the horse-head fiddle and its Mongolian origins?

Horse-head fiddle is a traditional Mongolian instrument. The history is based on the legend of a man who had a horse. He loved this horse. It was the best horse. It was magical; it could fly and this man was always with his horse. An evil man killed the horse. And the man wanted to remember this horse and the relationship between horse and man. So when you hear this music you will hear horse sounds. This instrument is now created of wood and the strings are horse tail. Because of the climate and the humidity in the U.S., the strings we perform with here are not horse tail, but in Mongolia they are made of horse tail. Originally, the handle of the horse-head fiddle was made of horse ribs and the entire fiddle was made from horse parts. For example, this base is made of horse skin and this handle is made of horse ribs and the strings are made of tails and this head actually shows the horse.

Are many of the songs about horses? Why is the horse so important to Mongolian music and Mongolian culture?

The music itself imitates horse sounds. For Mongolians, horses are best friends. A horse is a man's shadow, it goes with him where ever he goes. It's like a car. Everything revolves around the horse. We travelled all around the world by horse. Even today, we worship the horse. It's one of our treasures.

Throat-singing describes nature, seasons, wind, everything about nature. It imitates all the sounds of nature, water, wind. The lyrics can also tell a story. Some are epic stories about heroes, and some are praise songs, about places or people. Epic songs use overwhelming and exaggerated terms. It is very artistic and beautiful.

Did you learn formally in a school? How long did it take?

I started when I was 14. It took one year to learn basics and after that I developed my voice. I studied at home, by myself. We don't have a school for throat-singing.

In Mongolia, is it unusual to be a musician professionally as opposed to a herdsman or craftsmen professionally and a musician on the side? Has there been a big change from a time when people were musicians in addition to being a different profession and to a time now in contemporary Mongolia were you have your primary work to be musicians? How has the role of music in Mongolia changed from the historical time when musicians were also herdsmen to now when you have this professional music group?

It really depends now on the person and the talent. We are influenced by our families. They are all musicians and singers in addition to being herdsman. Our music is based on life experience and heritage. We are independent artists, but for along time Mongolian musicians were under Communists and everything was closed. Tradition was covered up during the Communist time. But after 1990, when Communism came down and democracy came, everything became free and a lot of independent artists came up.

It went underground (during Communism) and now there is a revival. During the Communist time the tradition was secluded, but we had a musical school. But after Mongolians graduated from musical school, they had to go into other fields. And we were told what to do. Many good teachers (of traditional music) died during that time and now we are the beginners of the new time.

Did the lyrics change during Communism?

Yes, the lyrics changed during Communism. We had to say something about Communism or about the party and say less about nature. But now the lyrics are about nature and are very spiritual.

But now you are creating music within your tradition that is also contemporary.

How has jazz music and classical European music influenced your work? How do you keep your music traditional Mongolian while incorporating other influences?

Jazz's influence makes our work bigger and broadens our range. It makes our music more beautiful. Tradition is our foundation and base. Jazz just gives us directions. When you play piano, the sound is more interesting and garnishes the traditional music.

YoYo Ma was greatly influenced by you and said he studied with you, and that you were his teachers. Can you say a little bit about working with YoYo Ma? I heard he was so impressed after hearing you that he invited you to tour with him on his solo concert.

YoYo Ma had an interest in the horse-head fiddle and he asked to learn. The way he learned was he just watched us play and just repeated us. He learned in one hour! We didn't play on the same stage as YoYo Ma; he asked us to perform at his concert, but by ourselves. He told us he was going to make some new music using traditional Mongolian instruments.

Whether our audience is Mongolians or Europeans, everyone is so excited about our work and so happy. It's a totally new thing for everybody, in Mongolia and all over the world. But we haven't played very much in Mongolia, mostly in France, Norway, Switzerland, all over Europe. But music in Mongolia is everywhere. There is a traditional theater. For Mongolians, this is traditional music and they are excited about tradition. Mongolian audiences describe their emotions by clapping (during the music) and there is a lot of interaction and it gives is a lot of energy. Our audience is like a second nature. We get feelings from the audience. If they clap louder and bigger, we feel more energetic and excited. It's our job to make audiences excited. The music is from our soul and from our hearts and this makes us original.