Master artisans will display, demonstrate, and sell their work 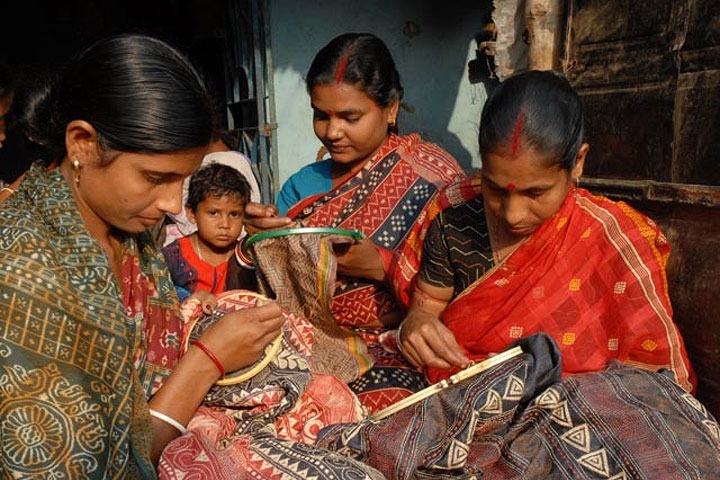 The sights and sounds of an Indian market are unmistakable—merchants selling their wares, customers bargaining prices, and artists creating new products simultaneously. India Abroad, the Indo-American Arts Council (IAAC), Crafts Council of India, and Asia Society invite you to experience an authentic Indian Folk Arts Market in the heart of Manhattan for the first time, from July 15-17 during the hours of 12:30 to 4:30 pm at Asia Society, located at 725 Park Avenue (at 70th Street). Master artisans will be on hand to display, demonstrate, and sell their work, all while exposing the general public to an arts and crafts industry that dates back centuries.

ABOUT THE ARTISANS | CO-ORGANIZERS & SPONSORS

Abdul Jabbar Khatri - Bandhini (Tie and Dye)
Born within the community of Khatris, who were once renowned for their traditional craft of Bandhani (Tie/Dye), Abdul Jabbar Khatri graduated with a Bachelor of Commerce in 1988. While his peers were leaving their traditional family craft and choosing to work in mainstream careers, he decided to take up the craft of making Bandhini. In 1988 the National Institute of Design in Ahmedabad, conducted a dyeing workshop for the craftsmen of the Bandhani in the Bhuj region. Khatri participated in it and realized that the entire craft could be given a new lease on life with the introduction of contemporary design ideas, color sensibility, and naturalized dyeing techniques. Khatri's enterprise generates income for more than 300 women in the villages of Kutch, and he has won the "Unesco Award of Excellence Award 2006" for his contribution to the craft.

Abdul Razak Khatri - Ajarakh Block Printing
Abdul Razak Khatri was born in 1958 in Dhamadka, Gujarat, to a family of traditional hand block printers of Ajarakh. His father, Shri Mohmed Sidik Khatri, a renowned National Award Winner, trained his son in the field of block printing. Khatri got his primary education up to 7th standard and become an expert hand block designer and printer at the early age of 16. For the last 35 years, he has been engaged in the art of producing fine block printed fabric with many variations of color, while experimenting with various natural dyes. Today, his main focus is on the technical development in the field and reviving old designs and creating new blocks.

Firdose Ahmad Jan - Pashmina Shawl Weaving
Firdose Ahmad Jan was born in Srinagar, Kashmir, to a family of shawl weavers who have been practicing this craft for centuries. His father, Bashir Ahmad Jan, a Shilp Guru (Living Legend), gave him training in weaving and embroidery. The Guru Shishya parampara (passing on knowledge from teacher to student) is very much a part of their cultural heritage. Their family has revived a number of designs in weaving and in embroidery. Some examples of these are being shown at the Indian Folk Art Market.

Kankuben Lalabhai Parmar - Appliqué
Kakuben Lalabhai Parmar of Madhutra, Santalpur, Patan, is a patchwork artisan and has been with the SEWA Project for the 20 years. She says, "We had no value for our work and never thought of getting income by selling them. It was only a piece of bread or flour that we got against several days work that I did. Even the community that I belong to is termed as scheduled caste and were treated as untouchables thus though having this traditional skill of patch work entering market with our work could never be dreamt of but with the help of SEWA and our company STFC it has become possible. I had never thought of my piece of patch work that I used to cover the torn mattresses in my house could be used as a curtain and beautify someone's drawing."

Shamji Vishram - Shawl Weaving
Shamji is a graduate in Arts from Bhuj University. He is a weaver, designer, and entrepreneur. He has worked with a range of new materials (like tussar, eri, muga, mulberry, cotton), finer counts and has also experimented with the introduction of new products in the last 10 years of his work. He is aware of the significance of natural dyes in the global scenario. Lately, he has been grappling with the idea of how value additions in the Bhujodi products could bring about better wages to improve the economic stability of the weavers.

Special thanks to sponsors: