How a 'Dharma Punk' Learned To Treat Addiction Through Meditation 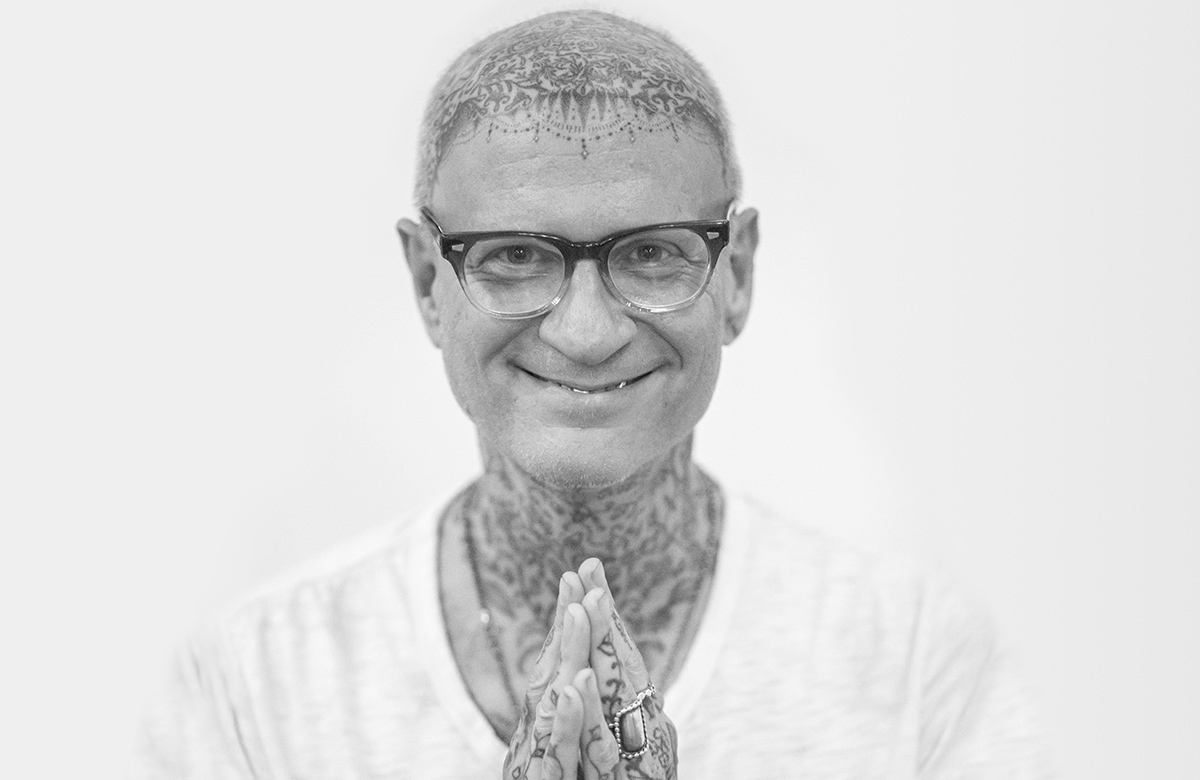 On September 11, 2001, as he took the New York subway to work, Josh Korda was finally feeling optimistic. After four decades of drug and alcohol addiction, he was now six years sober. He was married and had found a respectable career in advertising. But when he emerged from the subway that day, the sight of smoke billowing out of the Twin Towers forever altered his life.

Korda began to question his job and purpose in life. He suffered a nervous breakdown. It was then that his lifelong fascination for Buddhism and Western psychology, which he had rediscovered some years prior, deepened, and he sought a community to further his study. But his initial attempts failed. Korda, who is covered in tattoos, didn't look the part — and he felt uncomfortable with the groups' unfettered embrace of Western materialism.

Then he met Noah Levine. A former prisoner and recovering addict, Levine taught meditation to incarcerated youth and wanted help starting a Dharma Punx community in New York. Korda joined Levine, and over the course of a number of years gradually left advertising to pursue spiritual practice full time.

For the last 13 years Korda has been the guiding teacher at Dharma Punx NYC, originally founded by Noah Levine. He is also a contributing writer for the Buddhist magazines Lion’s Roar, Tricycle, and Buddhadharma. He recently published a book on meditation in the modern age called Unsubscribe: Opt Out of Delusion, Tune In to Truth, where he shares his three-step guide to recovery from addiction and describes his transformation from ad man to Dharma punk.

In an interview with Asia Society, Korda discusses the origins of the Dharma Punx community, why he decided to become a teacher, and how Buddhism and punk rock are compatible.

What sparked your interest in Buddhism? When did you start practicing?

My father got sober in 1972 when I was a kid. To help him with sobriety, he was encouraged to select a spiritual path. He chose Zen because he didn't like the religious faith of his birth. He started to sit and practice with a Zen group led by the author Peter Matthiessen.

During this time, my Dad would take me to different events where Buddhists spoke at the Ethical Culture Society and other places where Trungpa Rinpoche and other Buddhist teachers would speak. Eventually, our bookshelves became filled with works on Buddhism.

At the same time, my mom was heavily into psychology and had lots of books by famous psychologists. The first book I read as a teen in the Buddhist tradition was Three Pillars of Zen by Philip Kapleau, and then there was Hermann Hesse's Siddhartha. From these influences, I conceived of the Buddha as a kind of psychologist of the mind rather than a spiritual figure.

When I went to college in the 1980s, I started studying more about Buddhism, got heavily into Zen, and wrote a lot of papers on Buddhist ideas and Buddhist psychology. I seriously began my deep practice when I got sober in 1995. So that was pretty much the beginning of my deep dive into both study and being a member of the Buddhist community and going on retreats and all that.

What is Dharma Punx? How are the teachings there different from other forms of American Buddhism?

Dharma Punx was started by a fellow named Noah Levine in California at around the turn of the millennium. He started it inside the Theravada tradition as a way to have a sangha (Buddhist community) that would attract a lot of people who normally didn't feel comfortable in a lot of other Buddhist groups. People like punks, recovering addicts, and members of anarchist and LGBTQ communities didn’t want to go into sanghas where everybody was in their 60s and looked like an Upper West Side therapist.

Dharma Punx was an attempt to start a community that would allow, encourage, reach out to, and openly welcome people from historically disenfranchised groups. Like a 12-step program, we have talks where practitioners go into their history of emotional struggles and issues with addiction and addictive behaviors. You use yourself and your disclosure as part of the teaching. We don't teach from a place of "I'm some venerable fixed emotionally resolved human being." We don't present ourselves like we are gurus. We acknowledge that, like everybody else, we’re a work in progress, and that we still have anxiety and other issues that we’re working with. I always share and acknowledge my own challenges. And using both Dharmic tools and psychological tools, I tend to present a psychological therapeutic-focused class.

What led you to start teaching?

I didn't decide to become a teacher. I didn't want to do it. When Levine left New York in 2005, he said: “I'm going to need you to continue the meetings.” To say the least, I was pretty surprised. And while I had a lot of the background — I had spent the years after 9/11 transcribing talks by Buddhist teachers such Ajahn Amaro and Sucitto, studying the Pāli canon, going on retreats, sitting with Noah and asking him questions, and meeting with other teachers — I never had any goal or intention to become a teacher. But he basically put it to me that Dharma Punx wouldn't continue unless there was somebody willing to step up.

I’m now in my 13th year of teaching. I went to teacher training, got empowered, and have gotten more comfortable in my role. When I started teaching I would literally need 10 hours just to prepare for one class. Now I've gotten it down to probably three or four hours every time. I spent a lot of time looking through the canon and I have always been deeply interested in contemporary psychology, so I always try to integrate the Dharma with therapeutic insights so that my students have access to beneficial contemporary tools and practices.

Addiction recovery seems to be a central theme in your work. How does this approach affect your interpretation of Buddhism?

I think all Buddhism is about craving — and addiction is just a form of craving. I don't think that there’s any branch of Buddhism that doesn't address it. I think teaching about recovery from addiction is essentially teaching the Dharma because I believe that's what the Buddha taught.

The first noble truth is that we have suffering and painful emotional experiences. And the second noble truth is that if we try to avoid, distract, not feel, or try to escape those pains, then an addiction to craving something that will help us not feel, repress our painful emotions, or escape those addictions will make life worse than simply feeling and dealing safely and constructively with our emotional wounds.

And the third noble truth is if you let go of your cravings to sensual pleasures, those that are short term, and instead turn to reconnect with other people in a harmless way, then you'll be able to live a life with so much less needless suffering and emotional pain.

In your book Unsubscribe you tell the story of how 9/11 shook you and helped you transform from an ad man to a dharma punk. Do you think one needs these types of critical moments to grow in one's spiritual practice, or are there other entry points for people?

I don't think you can have a life without experiencing the first noble truth. Every life has emotionally painful events. So to the degree that we don't deal with them, we set ourselves up for increasing amounts of craving and frenzied busy lives that are ultimately unfulfilled. I don't meet people that come into Dharma centers or at least come to Dharma Punx, simply out of curiosity. It's a lot like 12-step meetings — nobody comes in on a winning streak. People come in because they are looking for help dealing with depression, ongoing anxiety, feelings of being overwhelmed in relationships, or feelings of lack of fulfillment or meaning or purpose in life.

I'm sure that there are other centers that can attract people who are just interested in learning how to meditate, but I think the people that come through our doors are also looking for or have had some kind of challenge or struggle.

Are punk rock and Buddhism compatible?

Absolutely. Some of the great punk and hardcore punk in the 1980’s all had the spiritual practices. A lot of them were what's known as straight edge, which meant refraining from alcohol, tobacco, and other drugs. For some, it also involved refraining from killing animals by adhering to strict vegetarian principles. Hardcore punk had a lot of overlap with core Buddhist principles.

The original punk ethos was always about community. And that's what the Buddha taught. He said that a prerequisite for any spiritual path was having wise spiritual friends. That's what punks offered each other, as well as a deep questioning and even seeking of purpose in life outside of materialism.