A Guide to Decoding Buddhist Symbolism in Tibetan Art

Buddhist thangka paintings are visually captivating and impressive — but there is more to them than meets the eye. Thangkas often focus on a specific deity and scene, and their form and surrounding details are often rich with symbolism, turning them into a medium for religious storytelling. Because of this, extracting all the intricacies and meanings from the paintings requires training.

According to Deborah Klimburg-Salter, guest curator of Asia Society Museum’s Unknown Tibet: The Tucci Expeditions and Buddhist Painting exhibition, Tibetan thangkas were originally created for the purpose of helping the viewer or Buddhist practitioner on his journey to enlightenment. In her exhibition catalogue essay “How To Read A Tibetan Painting,” Klimburg-Salter says that a thangka's characteristics — like organization and juxtaposition of figures, repetition of figures, and size — contribute to the storytelling of the painting.

Fully understanding the symbolic expression of the religious, social, and even political contexts of a thangka would require a degree in art history — but you can learn some of the basics using our guide below. 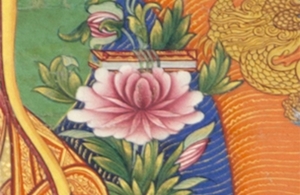 Lotus Flower
The lotus is often understood as a symbol of spiritual purity. The blooming of a lotus is said to mimic the Buddhist eightfold path — it grows from the mud (the cycle of life), it appears clean on the surface and floats above the mud (purification), before finally producing a beautiful flower (enlightenment). 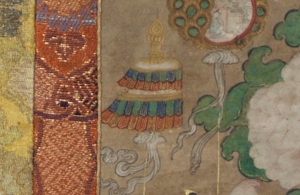 Victory Banner
The victory banner is depicted using four colored panels of cloth that represent Buddha’s victory over four maras, or hindering forces, in the path to enlightenment: pride, desire, disturbing emotions, and fear of death. 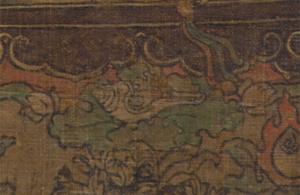 Conch Shell
The reverberation of a conch shell is said to symbolize the deep, melodic, far-reaching sound of the dharma, the Buddha's teachings, that awakens spiritual disciples from ignorance. 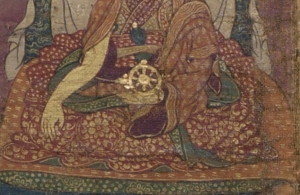 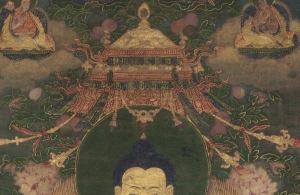 Parasol
The parasol is a symbol for protection from harmful forces and a place to take refuge the way followers take refuge in the dharma. 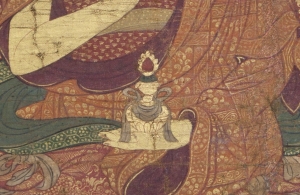 Treasure Vase
The treasure vase with flaming jewels symbolizes Buddha’s dharma teachings, which, despite being shared with others, never lessen in value. It also more broadly represents long life, health, wealth, prosperity, and other benefits in this world. 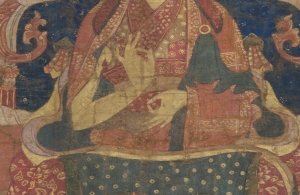 Vitarka Mudra
In Sanskrit, vitarka means applied thought or reasoning. The mudra is often considered to be the gesture of discussion or debate. Here, we have a lama with his right hand up and with his thumb touching his index finger, indicating he is teaching. 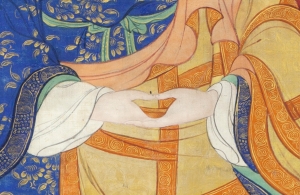 Dhyana Mudra
This gesture is often associated with meditation, representing the supremacy of an enlightened mind and wisdom. 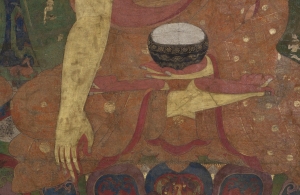 Bhumisparsha Mudra
With all five fingers of the right hand extended to touch the ground, this hand gesture symbolizes the Buddha's summoning Sthavara, the earth goddess, to witness his defeat of mara (the hindering force) that will be followed by his attainment of enlightenment. 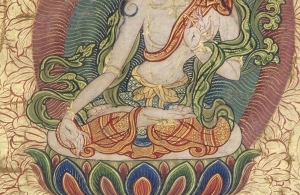 Varada Mudra
This mudra symbolizes charity and compassion. It is the gesture of the accomplishment of the wish to devote oneself to human salvation. 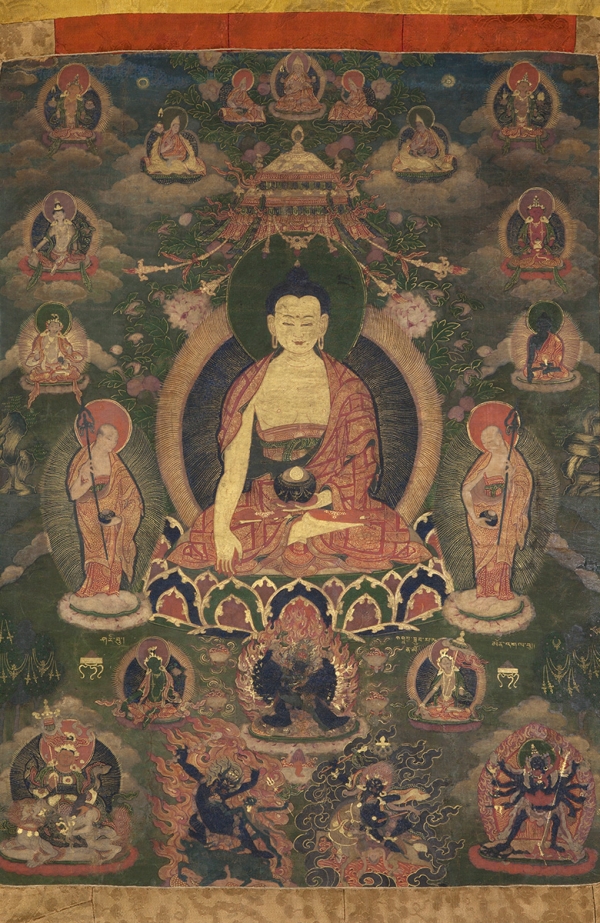 Shakyamuni Buddha, 18th century Tibet, Tradition: Gelug, Pigments on cloth, Inv. 970/803. In this image Shakyamuni is dressed in the patchwork robe of a monk and is seated in meditation posture on a lotus. Tsongkhapa, the founder of the Gelug tradition, is depicted directly above Shakyamuni. They are each flanked by their principal disciples. The names of Shakyamuni’s disciples appear below each in gold. They are Sha ri bu (Sariputra) and Mon gal bu (Maudgalyayana). Another inscription on the right, below Shakyamuni’s lotus throne, may be translated “I prostrate myself to Shakyamuni.” 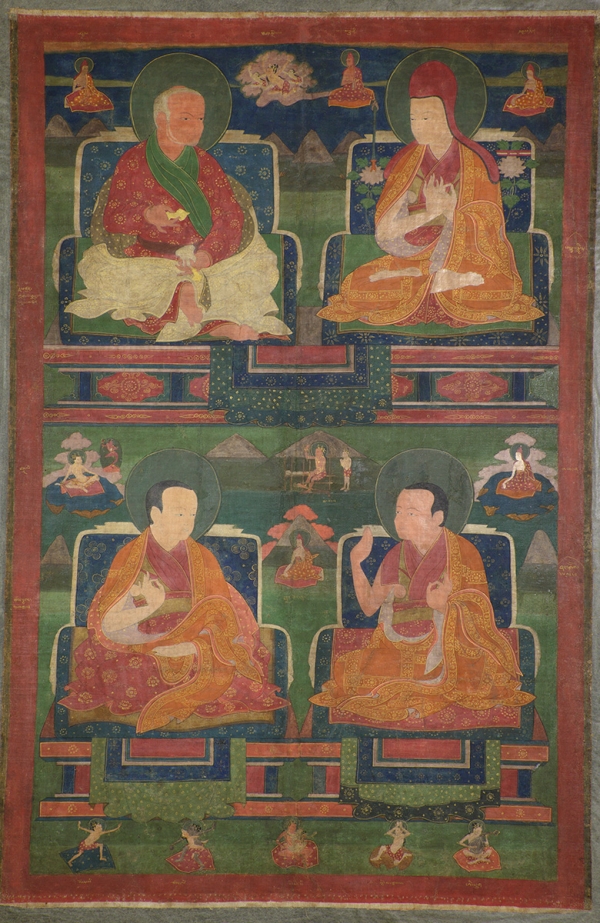 The Sakya Lamdre Lineage, 16th–17th century Shalu, Shigatse, Tsang (South-Central Tibet), Tradition: Sakya Pigments on cloth MU-CIV/MAO “Giuseppe Tucci,” inv. 881/714. This painting is the fifth image from what was likely a set of eight lineage paintings of the Sakya tradition’s esoteric tradition, and was obtained, a long with the other example of Sakya Lamdre lineage painting on view nearby, by Tucci in Tsang, a region he knew particularly well because of the significant amount of time he spent studying in Sakya Monastery. Courtesy of the Museum of Civilisation-Museum of Oriental Art “Giuseppe Tucci,” Rome. 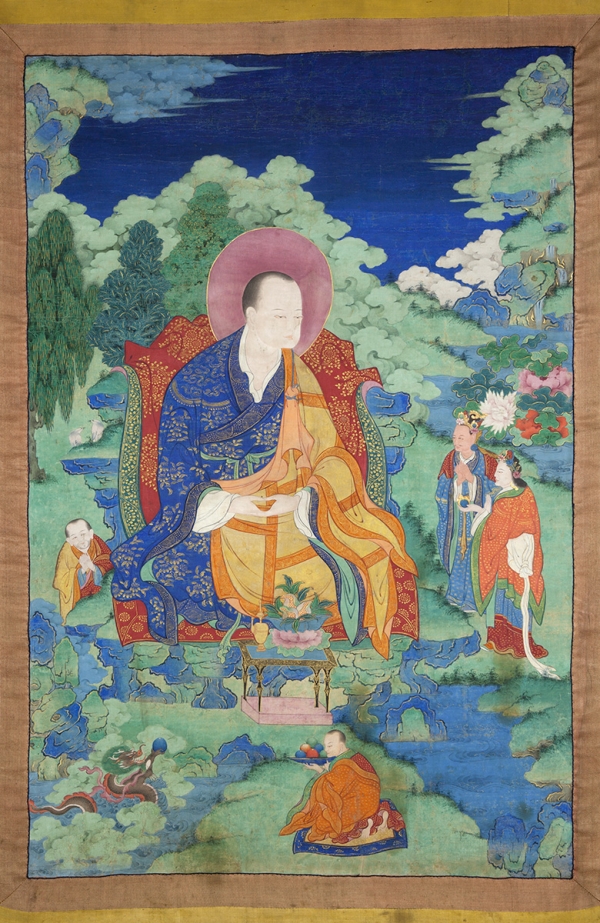 Cullapanthanka (or Cudapanthaka) Arhat, 17th century, Possibly Kham (East Tibet), Tradition: Gelug, Pigments on cloth, Inv. 930/763. Placement as indicated on verso: 8th from right Cullapanthanka is the last, or eighth painting, on the Buddha’s right-hand side. The two Arhats who occupied positions six and seven on this side are missing from the set. Cullapanthanka is said to have lived on Vulture’s Peak, one of the Buddha’s favorite spots for meditation, with a retinue of 16,000 Arhats. There, even wild animals were fond of listening to his discourses, as can be seen from the pair of birds to the Arhat’s right and the dragon below them in the bottom corner. In this painting, a royal couple faces the Arhat and offers him a blue jewel. 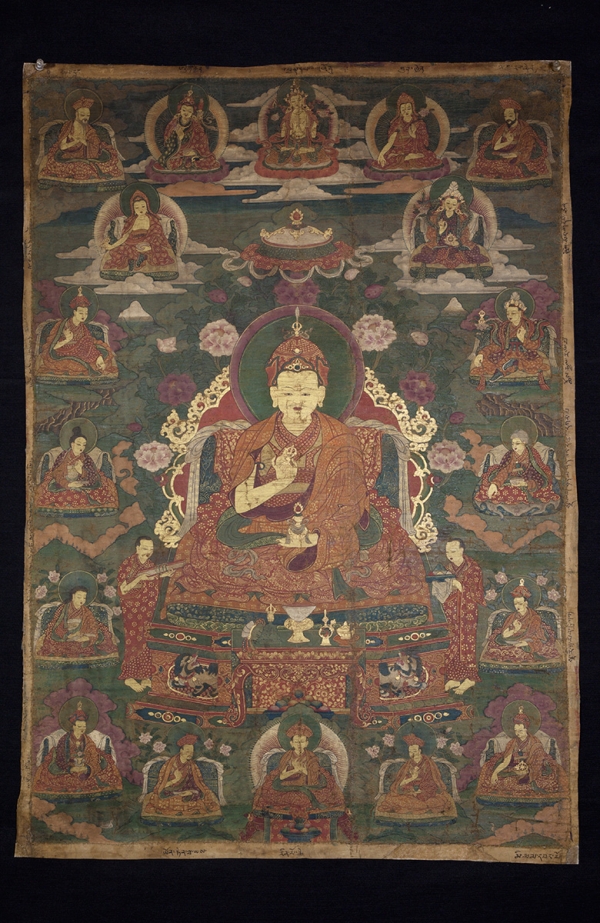 A Bhutanese Hierarch Jigme Sengge, Last quarter of 18th century, Bhutan, Tradition: Drukpa Kagyu, Pigments on cloth, Inv. 912/745. This rare representation of Jigme Sengge (1742–1789), the second Tritul or incarnation of the throne holder of Bhutan, and his lineage was likely made in Bhutan as an act of piety. The teachers depicted are of both the Drukpa Kagyu and Nyingma traditions. Jigme Sengge wears the type of hat associated with Padmasambhava, which is the typical Nyingma tradition hat with its prominent wing-like side pieces and a vajra protruding from the crown of the hat. He holds a vajra in his right hand and balances a vase on his left palm. The landscape and distinctive color palette conform to Bhutanese pictorial conventions. 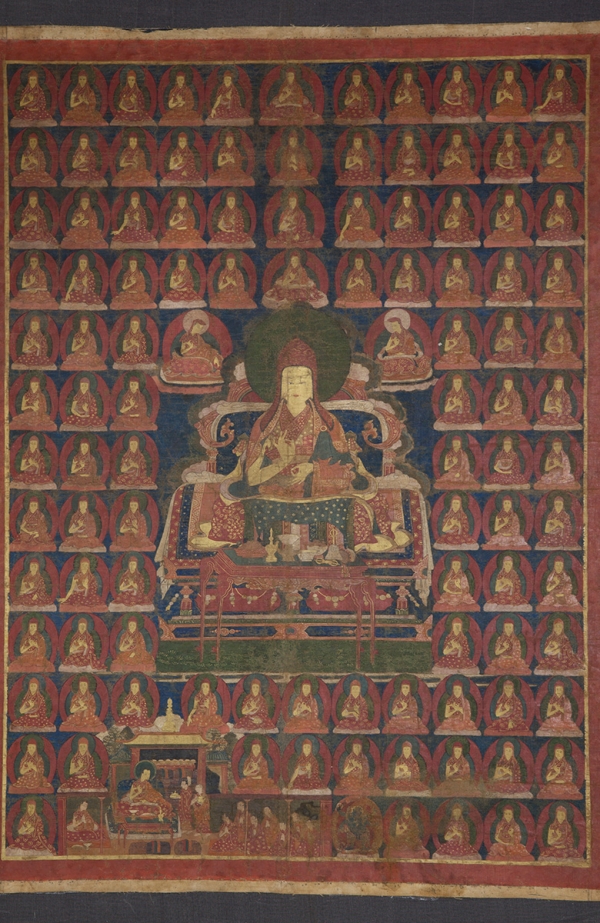 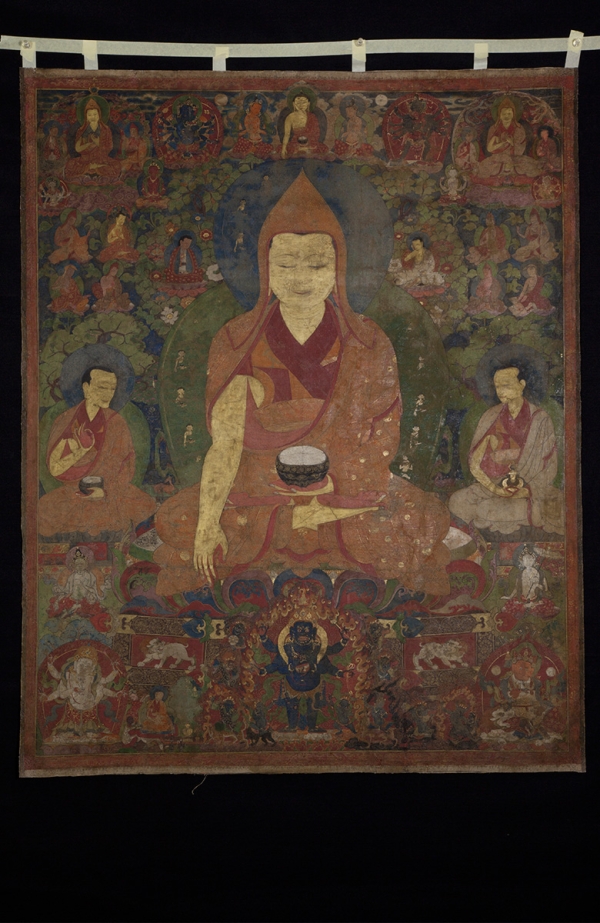 Panchen Lama, Early 17th century, U (Central Tibet), Tradition: Gelug, Pigments on cloth, Inv. 883/716. Tucci stated that he purchased this thangka at Tashilhunpo Monastery, located to the southwest of Lhasa, where this stylistically unusual painting may have been created. The Panchen Lama, a major figure in the Gelug tradition depicted at the center of the composition, sits with his hand in the bhumisparsha, or earth-touching mudra. This mudra is said to have been used by Shakyamuni Buddha at the moment he summoned the Earth to bear witness to his good deeds from previous existences and to defeat Mara before he achieved enlightenment. As was common, no caption was necessary to identify the representation of such an important historical figure. From the archaic impression given by the stiff bulky proportions of the central lama, it can be suggested that this is a relatively early painting representing the First Panchen Lama, Lobsang Chokyi Gyaltsen (1569–1662). 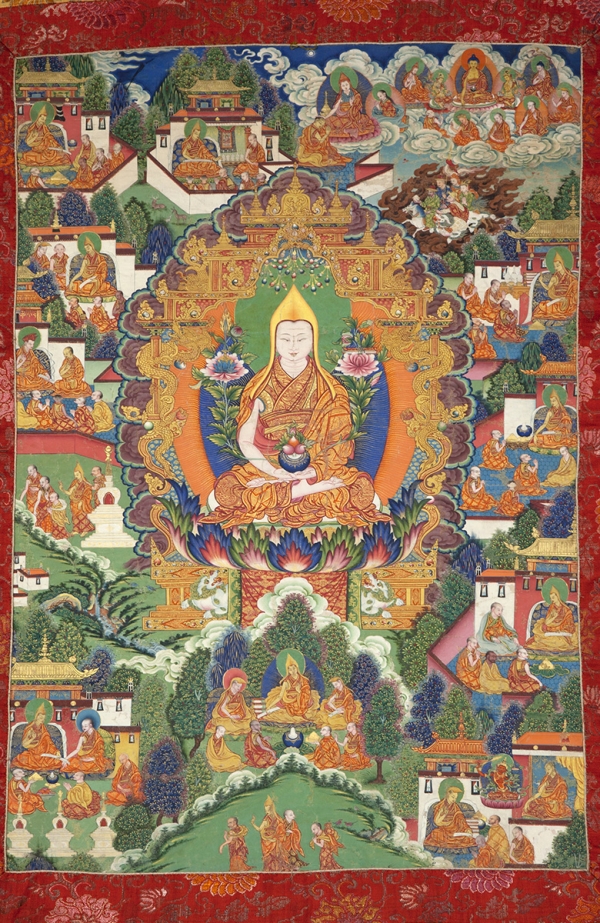 Tsongkhapa and Scenes from His Life, 18th century, India, Tradition: Gelug, Pigments on cloth, Inv. 890/723. In this painting, the central image of Tsongkhapa is surrounded by scenes from his life beginning at the bottom center and proceeding clockwise. The painting is noteworthy for the remarkably fine and detailed renderings of people, architecture, and nature, and is unusual in that it is based on a wood-block series from U in Central Tibet. When the brocade borders were removed from this thangka during restoration, an inscription was revealed that identifies it as the third on the left of a series of paintings. Tucci purchased this painting at Kyi Monastery in Spiti, Himachal Pradesh. 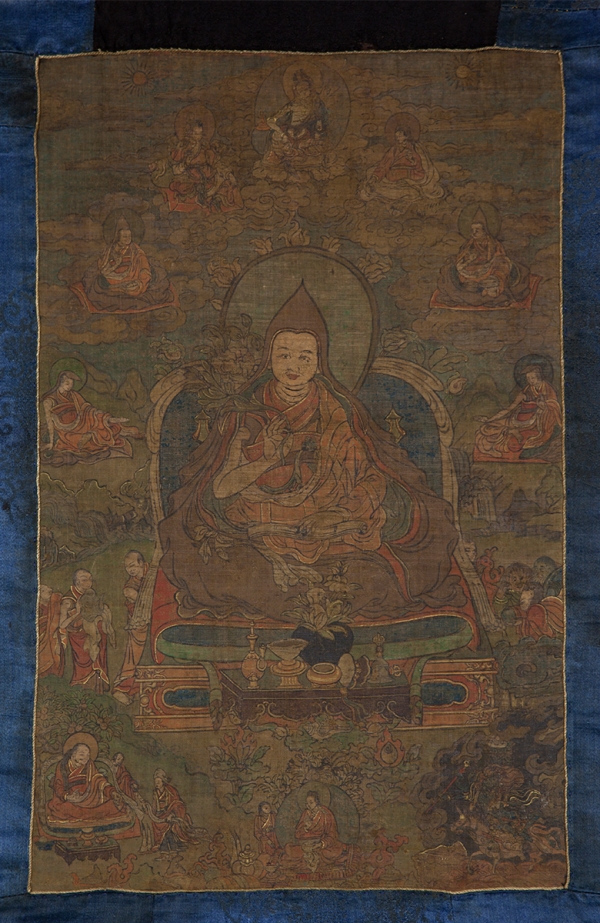 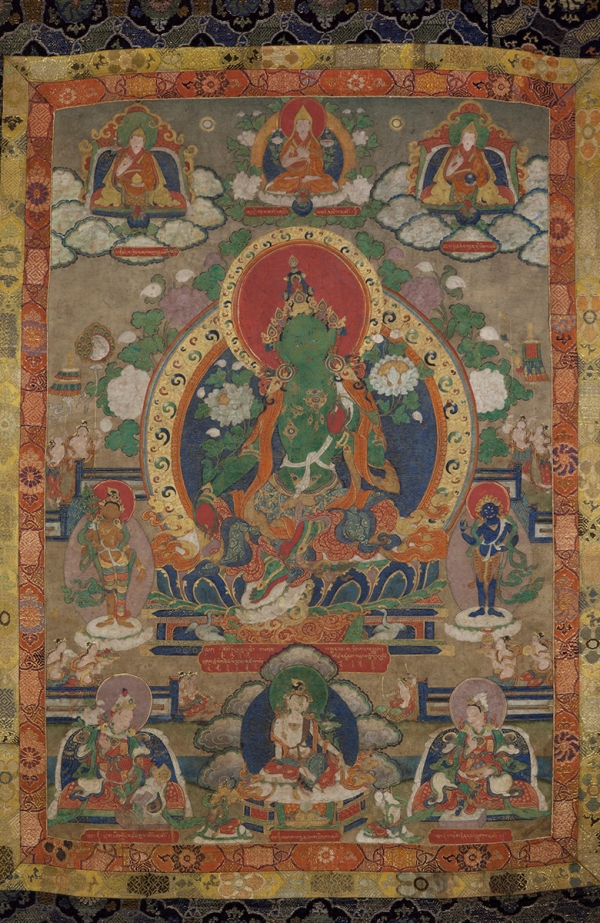 Green Tara, Mid-19th century, Mongolia, Pigments on cloth, Inv. 911/744. The almost portrait-like representation of the figures in this painting is a hallmark of the highly regarded Mongolian artistic tradition of the mid-nineteenth century. The central Green Tara in this painting has an image of a red Amitabha Buddha in her crown rather than the green Amoghasiddhi more commonly found there. Her other attributes, like the blossoms she holds in her hands and her companions Marici and Ekajata, conform to standard depictions. Tibetan and Mongolian inscriptions are used in the painting as invocations to Tara and Avalokiteshvara written below the lotus throne, as well as to identify the deities. 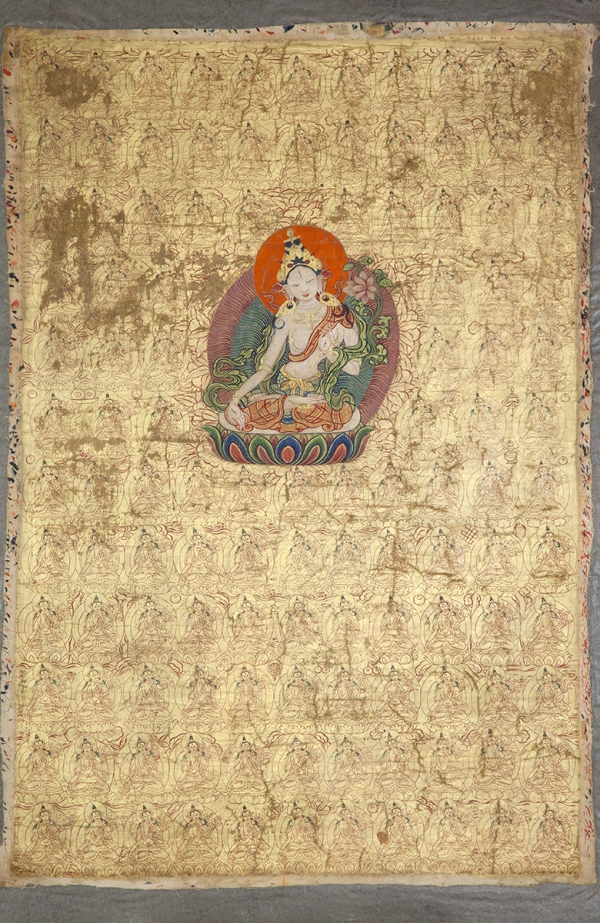 White Tara, 19th century, U (Central Tibet), Tradition: Possibly Gelug, Pigments on cloth, Inv. 997/830. Like Ushnishavijaya, the deity on the Gold Thangka nearby, White Tara is a deity of long life. 116 small repetitions of White Tara surround the large representation in this painting. Auspicious symbols appear between the figures.